How Popular Are Podcasts in Western Europe? These 3 Stats Tell the Story 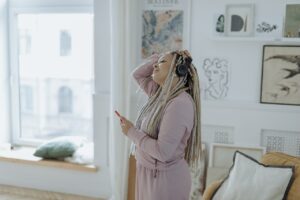 Podcasts have been growing in popularity for years now. But how many young Europeans are listening?

Young consumers have been fueling the podcast economy for years now, and the pandemic fueled a rise in listening as Gen Z and Millennials sought more ways to keep entertained at home. In fact, Spotify recently revealed that podcasts gained momentum across age groups last year, with the number of 15-44-year-olds who tuned into shows on the platform growing 34% year-on-year. Meanwhile, Emarketer found that 70 million people in Western Europe listened to podcasts in 2021, highlighting the medium’s increasing presence in young consumers’ lives—and their increasing value for brands. In fact, Europe’s podcast ad revenue is expected to reach €207 million by 2023, a massive increase compared to the ad spend of 2019, which was just under €39 million. A study from Grand View Research also found that the global podcast industry is expected to reach a value of $605 billion in 2027, and Spotify has taken note—the streaming giant has invested heavily in the podcast space, acquiring brands including Anchor, Gimlet, Betty Labs, and Whooshkaain in recent years to become listeners’ go-to app for not only music but podcasts, too. Brands such as the NBA, HBO Max, Nickelodeon, and Warner Bros. have also been making moves to launch their own podcasts to join the fast-growing billion-dollar space.

With the podcast industry continuing to heat up around the world, we wanted to know how young Europeans feel about the medium now. So in our recent WE TV & Entertainment behavioral report, we asked. Here are four stats that reveal how Gen Z and Millennials in Western Europe are integrating podcasts into their lives: 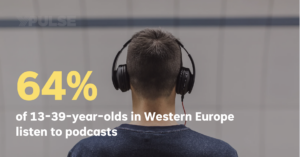 While many reports show that Europe’s podcast market is much smaller than that of the U.S., the industry is gaining ground in Western Europe, and podcasts are becoming a top form of entertainment among young consumers. Now, 64% of young Europeans tell YPulse they listen to podcasts at least sometimes—and 29% are listening weekly or more often. Though a lack of commuting may have led to some drops in podcasting listening in 2020, overall, the pandemic globally gave podcasts a big boost—and an even bigger boost in Europe. While global podcast listens increased by 42% over the past two years, according to Voxnest, European listens went up 53%. The growth was greatest in the countries that implemented quarantines the quickest—Italy’s listenership has grown by 29% and Spain’s 25%.  In fact, YPulse data shows that young Spanish consumers are listening to podcasts the most: while overall, 64% of Western Europeans say they listen to podcasts, 74% of 13-39-year-olds in Spain do, and nearly two in five are listening weekly or more. The lowest rate of listenership is in France, where just 59% of young consumers say they tune in. While just three in five young Britons say they listen to podcasts, the industry did get a big boost in the U.K. during the pandemic—13 million people tuned in to podcasts in the U.K. 2020, surpassing Emarketer’s pre-pandemic expectation by nearly 2 million. 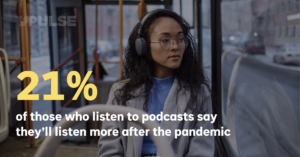 One in five say they’ll listen more after the pandemic.

Among the 64% of young Europeans who say they listen to podcasts, the majority say that the end of the pandemic won’t affect how much they tune into their favorite shows. In fact, nearly six in ten tell YPulse they’ll listen just as much as they do now when the pandemic is over, and 21% say they’ll actually listen more. This could have something to do with the eventual return of commutes. But with podcasts growing so much during the pandemic, it likely also just has to do with their push into the mainstream. After all, Spotify has made a major move into podcasts, and as the top streaming service young Europeans are using and paying for, they’re bound to listen more and more as their go-to space for music continues to offer them original podcasts, too. While Spanish consumers are the biggest listeners, young Britons are the ones that are most likely to say they’ll listen more once the pandemic is over at 25%. All that said, the end of the pandemic might lose some listeners, too. Overall, 22% of 13-39-year-olds in Western Europe say they’ll listen less once life gets back to normal. But that’s consistent with the number who say they’ll lower the amount of time they spend watching TV shows, playing video games, and consuming online videos, too, meaning podcasts likely have nothing to worry about. 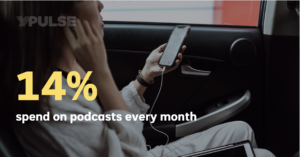 When we asked young Europeans to tell us the types of entertainment they spend on in a typical month, podcasts certainly weren’t at the top of the list. In fact, the only form of entertainment that they’re paying for less than podcasts is magazines. But, with so many podcasts available to listeners for free (and making money through ad revenue), the fact that 14% of young Europeans are paying for premium podcast content isn’t nothing. This spend could get higher, too. According to an article from Forbes, Europe seems to be building a podcast economy “where paid subscriptions will play a much bigger role compared to advertising.” One example of this is Podimo, the Danish “Netflix for podcasts,” which charges €5 a month for access to its platform of nearly 1000 original podcasts. According to Forbes, this differs from North America’s typical podcast platforms such as Luminary, which “spent tens of millions of dollars to offer exclusive podcasts from a few dozen big-name producers and celebrities” rather than attracting listeners with hundreds of lesser-known podcasters. As Podimo (and other platforms) continue to expand the podcast space, it’s likely we’ll see more young Europeans tuning in—and pulling out their wallets.