How Young Europeans Are Following Pop Culture, in 2 Charts 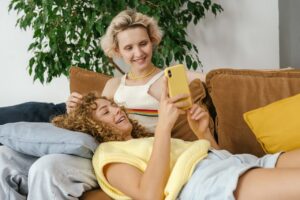 We asked Gen Z and Millennials in Western Europe where they’re getting their pop culture fix. Their answers reveal how the meaning of pop culture has changed…

In YPulse’s recent WE Pop Culture, Redefined trend report, we went deep into the pop culture moments European Gen Z and Millennials care about most—and how they’re reshaping the very definition of what a pop culture moment is. Sure, every generation has overturned the cultural interests of the one before, gravitating towards new music, style, celebrities, and events. But in the past, brands were able to at least partially rely on a predictable media calendar to create campaigns around a set list of events that the majority of young people would be watching live at the same time. But those days are gone. Instead, young consumers today are consuming culture when and where they want to and pushing new kinds of trends (and their creators) to the forefront of pop culture.

All of this has created a whole new set of rules for how brands can—and should—reach young consumers today. But to understand how to jump on a new pop culture moment—or even create one of their own—brands first need to understand how young consumers are staying in the pop culture loop. In our recent survey, we asked 13-39-year-olds in Western Europe to tell us their number-one source for keeping up with pop culture events. Here’s what they had to say: 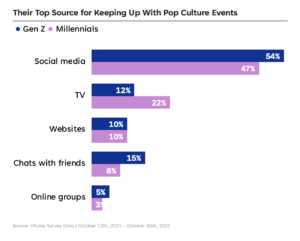 Young Europeans are by far turning to social media over every other medium for all things pop culture—and especially Gen Z, the majority of whom list social as their top source. Millennials, too, are checking their feeds for most of their pop culture news, but are +10 points more likely to say that they’re getting the goods from live TV. As we covered in our trend report, young consumers (even Gen Z) are still tuning into live TV for some cultural events—nearly three quarters say that there are still some things they like to watch on live TV, and three in five say they watch pop culture events on TV. But TV is far from their top pop culture source, and the types of broadcasts they tune into—including awards shows, sporting events, and political events—represent the old guard of pop culture.

The new guard, of course, is social media, which is far more than just a medium for consuming cultural moments. Instead, social media is culture, and its organic, ephemeral, and unpredictable influence is spawning trends faster than ever before—and subsequently creating a more challenging media landscape for brands to traverse. In fact, when we asked young Europeans to tell us the top types of pop culture moments their generation pays attention to, memes/viral content (aka the sustenance of social media) came in third after the release of a new movie or album/song—and number one for Gen Z. And when given a list of moments from 2021 that included celebrity news, awards shows, music releases, and broadcast media events, the events they say they paid the most attention to are those that went viral on social, such as Squid Game, which blew up on TikTok with users reenacting the games to replicating the characters’ looks. Indeed, while Gen Z and Millennials still define pop culture moments as celebrity gossip and media events, interest in these events is largely driven by how they play on social media, and many young Europeans say they follow along on social while watching live TV events—or follow on social instead of watching on TV. A perfect example of this was the Met Gala, which made young Europeans’ list of the biggest pop culture moments of 2021 after Gen Z stars and influencers, including Timothée Chalamet and Billie Eilish, walked the event’s red carpet, paving the way for a new era for the event this year. Likely because of their inclusion, social media played a big role in the event this year, with young TikTokers using the platform for their own fashion discourse before, during, and after the event, and memes about the event filled feeds for days. Instagram also played into the shift by making popular account Saint Hoax their official meme-correspondent for the event, giving young consumers a new kind of behind-the-scenes experience on the platform they’re turning to for pop culture the most: 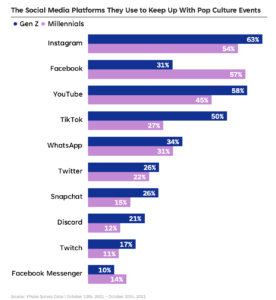 Overall, the majority of young Europeans are turning to Instagram the most to keep up with pop culture moments, but there is a generational divide when it comes to the platforms they prefer. For Millennials, Facebook is the top source of cultural intel while just 31% of Gen Z use the platform. For the younger generation, Instagram is the number one platform, but YouTube is a close second, highlighting (yet again) how influential the video-sharing platform has been in their lives. And, of course, nearly twice as many Gen Z are using TikTok as Millennials as the social space solidifies its place as trend creator and cultural hotbed. While its popularity was soaring even before the pandemic, TikTok became the platform of 2020 (and 2021), gaining 1.36 billion downloads worldwide last year. In Western Europe, the rate of use is continuing to grow—especially among Millennials—and will likely keep spiking as young consumers continue to find and create pop culture moments there.