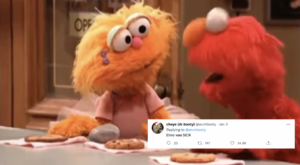 Elmo’s Feud With Rocco Is Uniting the Internet (If You Know, You Know)

An Elmo renaissance has taken over social media this week, giving everyone a glimpse into what kind of energy we should all be entering 2022 with. The Elmo saga began thanks to Twitter user @wumbooty who shared a video of a moment (from a  2004 episode) in Sesame Street where Elmo yelled at Zoe’s pet rock, Rocco, after Zoe insisted they (as in the rock) eat the last cookie at the table—the cookie that Elmo wanted. The episode is clearly a lesson on sharing, but the way Elmo insists on not sharing the last cookie with a rock has been “down right cathartic” for the internet as they revel in this iconic clip—Rocco is just a rock, after all. The video has garnered over 8M views, 400K likes, and 2K replies from users sharing more Elmo x Rocco clips. Since then, Elmo content has flooded the internet—a sound of Elmo flaming Rocco was created just for TikTok. General Elmo content, like the puppet singing about a paper towel roll, “chugging along like a train,” or saying balsamic vinegar (Elmo’s voice makes it sound quite fancy, pronouncing it “bawl-some-ic vin-eh-guh”) is also going viral. NPR reported how Elmo’s feelings about Rocco feels on par for 2022; everyone’s a little frustrated, melancholic, and at a loss for words over everything at the moment. 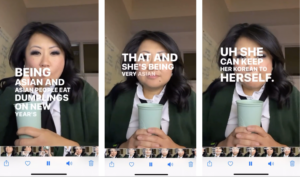 #VeryAsian is Providing Support and Solidarity To the Asian American Community

After KSDK St. Louis news anchor Michelle Li hosted a segment about traditional New Year’s foods, shedding a light on how dumplings are a staple for Asian Americans, a local viewer complained about the segment via a voicemail left for the network. Her message listed multiple, racist statements pointed at Li, including, “She’s being very Asian. She can keep her Korean to herself.” Michelle Li posted a video of herself listening to the voicemail message on social media, and her post quickly went viral, garnering 3.7M views, over 8K retweets, and 53K likes as journalists, Asian American allies, and more showed support for her. Li responded to her tweet’s viral status, explaining she would like to have a “heartfelt conversation” with the viewer. Li also shared with NBC Asian America that she spoke about the dumplings to educate others about communities outside of their own and was (obviously) shocked at both the racist incident and how quickly her tweet went viral. Social media users have responded to Li’s post by sharing the tag #VeryAsian to celebrate Asian American culture with pictures of their families, sharing foods they enjoy during their holiday traditions and everyday life, and more. Li notes, “[The incident] became this really beautiful thing, where instead of this disheartening feeling that I had the night before, it was like, ‘Oh my gosh, people are sharing pictures of their families, and their happy New Year meals and they’re using this hashtag to say something, to show support and solidarity.” Since the beginning of COVID-19, hate crimes against Asian Americans have increased, and the #StopAsianHate movement is one of the biggest efforts aimed at supporting the Asian American community while demanding a stop to racist hate crimes. YPulse research shows Gen Z and Millennials believe racism and discrimination have gotten worse in America, and #VeryAsian is another example of how they’re using social media to take action. 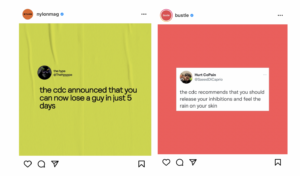 Another year, another pandemic meme the internet can’t stop talking about. After the Center for Disease Control and Prevention (CDC) updated its COVID-19 guidelines on December 27, explaining people who test positive and don’t have symptoms after five days only need to isolate for five days instead of 10, the internet started having some fun with the news. Some experts questioned the recommendation, while social media users responded with a meme commenting on how anything the CDC says, goes. For example, @buddhatree on Twitter posted, “CDC says when you’ve reached the center of a Tootsie Pop, your quarantine is over”; @ArielDumas wrote, “The CDC just announced you don’t actually have to wash your hands, just get the fingies a little wet”; @TheHyyyype said, “the cdc announced that you can now lose a guy in just 5 days”; and @Ygrene posted, “cdc says go ahead and get bangs.” Essentially, people are putting their “hot takes” or memeable recommendations after the phrase, “The CDC says,” or “The CDC recommends” to make a point about what else is and isn’t en vogue according to the health organization. Hastie Afkhami, Head of Digital S3 Group and Digital Political Strategist, explained to Cheddar News that social media users are using the meme to blow off steam amid the tiring COVID-19 news cycle. Several iterations of the meme are popping up under #cdcsays and #cdcrecommends, so just make sure to take Twitter users’ recs with a grain of salt when searching for more pertinent updates. 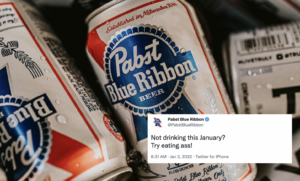 In a tweet posted Monday morning reading, “Not drinking this January? Try eating ass!,” Pabst Blue Ribbon revealed how it really feels about the alcohol-free trend. The tweet was deleted not long after (PBR also issued an apology), but before that, Twitter users had some fun. PBR’s tweet garnered 921 retweets, 1,073 quote tweets, and 2,347 likes within two hours (according to a screenshot that was posted of the tweet time stamped at 10:36 a.m. on January 3), and one user clapped back at the brand with a reply reading, “PBR or ass? What’s the difference?” Whether PBR was attempting to release some pent up rage, cause some Twitter wars, or just be quirky is unclear. And however inappropriate it was, data from ShareThis reveals exactly how the incident grabbed hold of everyone’s attention. Online engagement with the brand increased 63% compared to the last three days of December—mostly triggered by a 95% increase for PBR-related content, a 3% increase in clicks, and 2% increase in content shared about the brand. PBR has tweeted once since the January 3 tweet with a post that simply reads, “Beer.” PBR’s Vice President of Marketing told Adweek that one person was responsible for the tweet and they’re handling it “internally.” Young consumers have been fueling a Sobriety Shift for some time, and clearly some alcohol brands (jk it’s just PBR) are trying to ignite their interest in some pretty dramatic ways.

“Leaving 2019, entering 2022” memes are all over social media as young people share the realities of almost two years of living during a pandemic.

People are calling out Jeff Bezos’ disco-themed NYE celebration…which happened on a yacht, in the Caribbean, all while wearing some splashy attire.

A new phrase for describing one’s body type exists thanks to women on TikTok who are calling their bodies “AirPod shaped.”

Matt Damon’s ad for Crypto.com is being flamed as it compares investing in crypto to historical feats like space exploration.

Dana White clapped back at Jake Paul’s request for the industry to issue better working conditions for UFC fighters…and it’s a little awk.

Not only has the COVID-19 Omicron variant left many confused over its intended pronunciation, it has made people mistake the singer, Omarion, for the strain.

The Harry Potter cast reunited for a New Year’s Day special, and fans spotted a few editing mistakes featured in the HBO Max production, forcing the streaming service to upload a fresh version shortly after.

Adam McKay’s Don’t Look Up broke the Netflix record for most viewing hours for a film in a single week, racking up 152.29 million hours watched globally the week of December 27-January 2.

North America
Taylor Swift is The Newest Celebrity Private Jet Controversy on The Viral List
TL;DR Taylor Swift has been called out for having the highest emissions of...
Western Europe
NA vs WE: Who Are Online Celebs Influencing The Most?
How does young Europeans’ and North Americans’ affinity for online celebs compare? ...
North America - Western Europe
BarbieCore, Instagram Updates, and Scarlet May on The Viral List
TL;DR BarbieCore represents a new, inclusive image of femininity Instag...