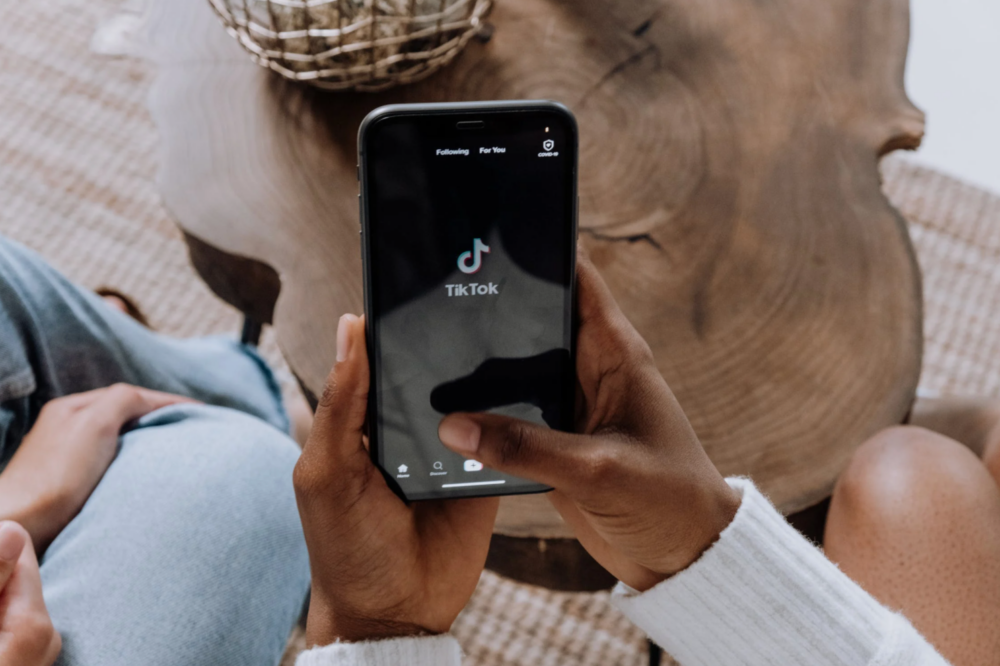 YPulse’s recent mobile/app behavior report  found that the majority of 13-39-year-olds say they have been spending more time on their phone since the pandemic started. Their phones have been their lifeline to friends, vital information, and of course, much needed entertainment. Our research shows that Gen Z and Millennials have an average of 25 apps downloaded, and they’re using 8 in an average day. Social media, messaging, email, music, and media viewing apps are the top types they tell us they’re opening every week—but what app is actually their favorite? ​​

In our behavioral survey, we asked 13-39-year-olds “What is your favorite app?” and respondents listed over 200 apps. But one notable app was clearly the most-mentioned for the first time in our favorite app tracking:

In 2020, only one app was keeping TikTok from the top spot, and now TikTok is officially at the top of the ranking of Gen Z and Millennials’ favorite apps. The platform’s usage and relevance has continued to explode in the last year (so much so that we provide a monthly round up of the biggest hashtags on the app) and it’s clear that young users love spending time on it. YPulse’s 2021 Social Media Deep Dive report found that entertaining content, combatting boredom, and mood boosts are the top reasons that TikTok users are visiting, and Gen Z and Millennials are most likely to describe the app as fun, popular, and addictive. In other words, it’s been on a trajectory to win out as their favorite for some time.

But of course, Gen Z’s favorite apps are different from Millennials, and, yes, the younger gen is the one driving TikTok’s popularity: 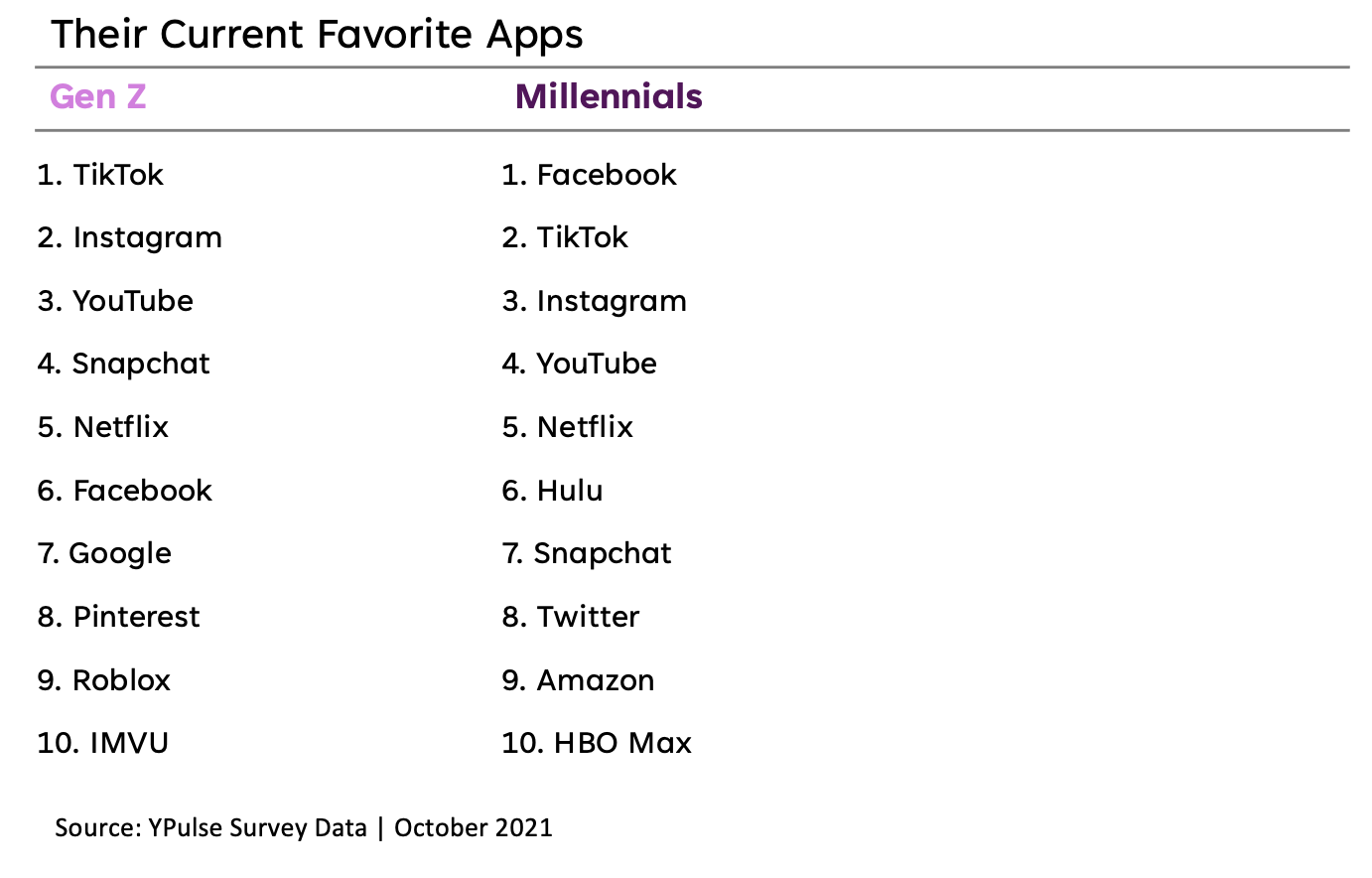 Gen Z is more likely to name TikTok as their top favorite app, while Millennials are (still, yes, still) more likely to list Facebook as their top favorite. While TikTok is still high on Millennials’ list, TikTok’s year-on-year growth among Gen Z is astronomical, and we’ve been telling you how they’re much more likely than Millennials to use the app. When asked why they listed it as their favorite app, many of the teen respondents cited that its content and videos are “funny” and “keeps [them] entertained.” But of course, to keep young TikTokers’ attention, the company has been launching newer features on the app including adding more shoppable content and hosting more virtual events.

Snapchat is another platform that Gen Z is more likely than Millennials to list as their favorite app. We told you about Snapchat’s massive growth, and how brands have been working with the platform to reach young consumers again and again. And in the last year, they’ve specifically targeted Gen Z with new reality shows featuring influencers and musicians starring Megan Thee Stallion and the D’Amelio sisters. According to the company, over 90% of Gen Z watched shows featured on Snap Originals last year, and Snapchat is “constantly trying to find stories that we think will resonate with our audience, coupled with talent creators.” Snapchat also recently launched Snap Creator Marketplace, which will allow businesses to partner with select AR creators through the end of the year, and is planning to roll out the marketplace featuring all of Snap’s content creators early next year. Snapchat has also leaned heavily into shoppable content by launching shoppable shows, a new camera lens, and virtual markets to grab young users attention. While one 19-year-old female said that Snapchat is important for them “to communicate with friends [since]  socialization is important especially during COVID,” another 16-year-old female said they enjoy the filters and new features the app is coming out with.

Twitter, Amazon, and HBO Max are three apps that made Millennials’ top 10 ranking, but not Gen Z’s. Our Social Media Deep Dive report explored how Twitter use has skewed Millennial for some time, and with Millennials’ more likely to be shopping on their phones than Gen Z, it makes sense that Amazon is a more frequent mention among the older gen. Meanwhile, HBO Max’s  was one of the biggest brand affinity winners of 2021, according to YPulse’s Biggest YScore+ Rises and Falls of 2021 Special Report as shows like Succession and their reunions (like, Friends, The Fresh Prince of Bel-Air, and the Harry Potter reunion) appealed to Millennials’ nostalgia. Recently, WarnerMedia announced that HBO Max and HBO ended 2021 with about 73.8 million subscribers, exceeding their expectations—and clearly Millennials are helping to fuel the growth. YPulse’s media consumption survey also shows that Millennials are more likely than Gen Z to be watching HBO Max, whether on their phones or on the TV screen.

Meanwhile, Roblox and IMVU made Gen Z’s top 10 list but not Millennials’. YPulse’s recent gaming report found that Gen Z is far more likely than Millennials to say they play open world / sandbox games like Roblox, Minecraft, Legend of Zelda, Animal Crossing, and IMVU, and Millennial parents name  Roblox as a top video game that their kids play. We’ve also called out IMVU as a social metaverse platform to watch, and the platform saw a surge of popularity during the pandemic. Both Roblox and IMVU appearing on Gen Z’s favorite app ranking is a clear sign that the younger generation is the one powering the future of the metaverse. We told you that the metaverse was a marketing trend that took off in 2021, and we predict that it’s going to become even bigger in 2022. But while some are banking on the idea of the metaverse as a single futuristic virtual world, the reality is the metaverse already exists in the games and social platforms that young people are spending their time in, and names as their favorite apps.

The differences between Gen Z and Millennials’ favorite apps show that while both generations love their social platforms and streaming apps, Gen Z is more likely to favor up-and-coming platforms that are fueling some of the biggest trends of the internet, and marketing.   ​