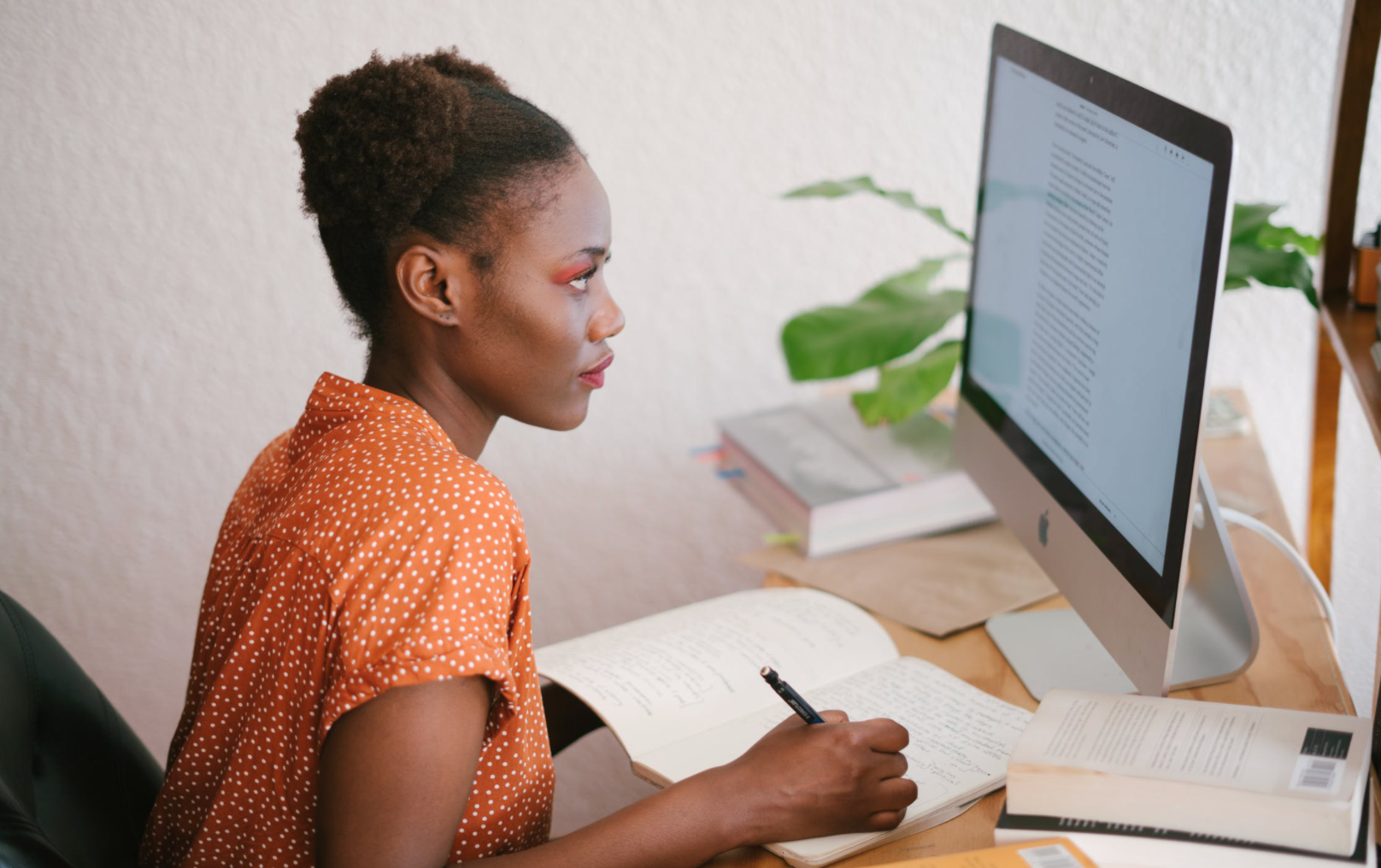 It’s finally 2022. What new skills do young consumers want to learn this year?

There’s no denying that 2021 was still a difficult year for young consumers, but that didn’t stop them from pursuing their hobbies or learning new things. YPulse’s Self-Taught trend report looks at what topics young consumers are turning to the internet to learn, what they wish they learned in school, and where they are alternatively learning these topics, and much more. We told you that Gen Z and Millennials are generations of researchers whose top resources include Google, YouTube, and other online platforms, when they want to learn something new. The top things they’ve researched in their free time? DIY/How tos, hobbies, and new skills.

For brands, there is a huge opportunity to provide resources that speak to their desire to learn. But what do they want to know about now? In the trend survey, we also asked 13-39-year-olds, “What new skill or topic do you plan to learn more about this year?” and these are the top things they tell us the want to learn in 2022: 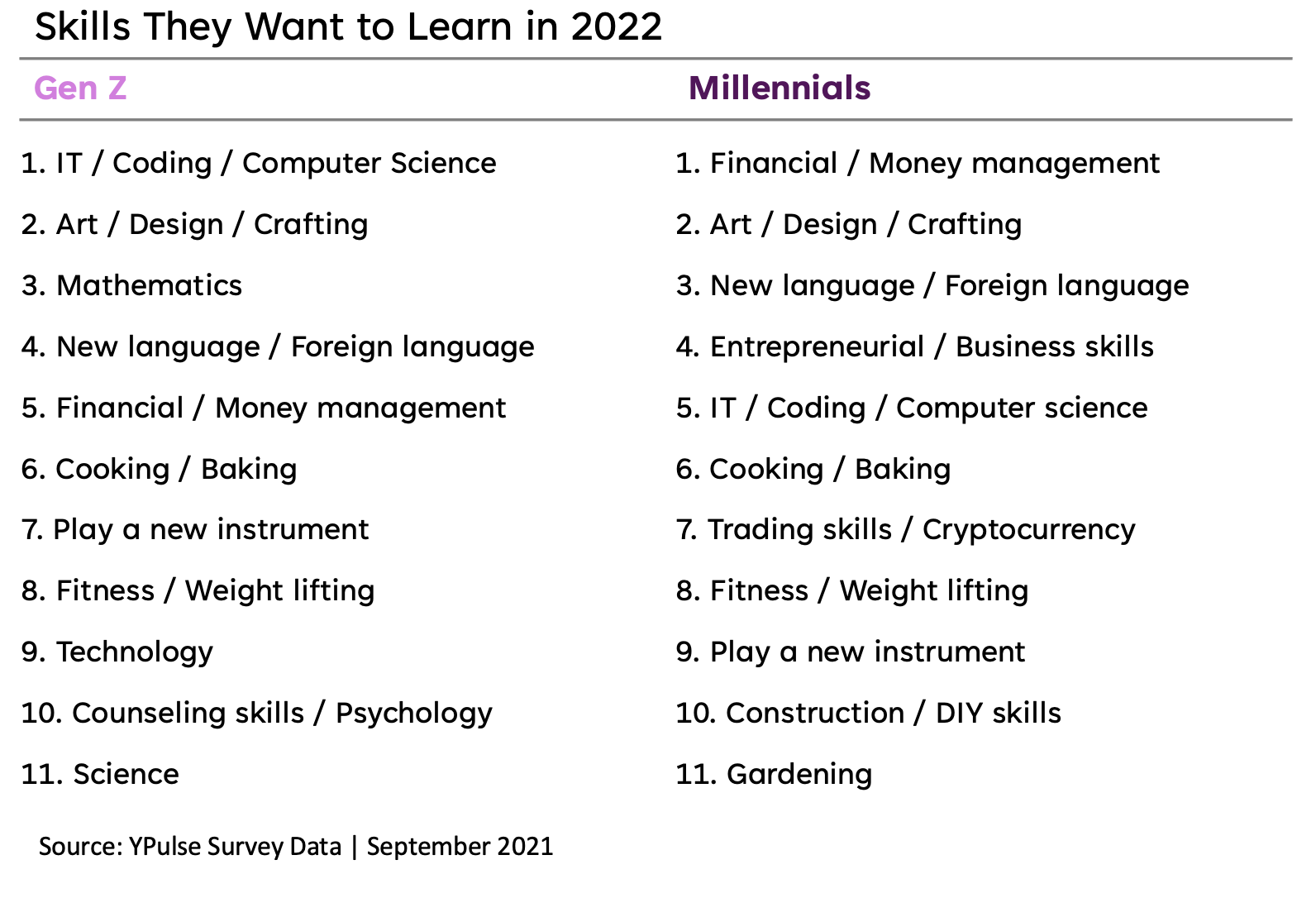 The top response for Gen Z and Millennials on this question shows a big generational difference: Gen Z is more likely than Millennials to say they want to learn IT / coding / computer science skills. Our Self-Taught research found that 34% of 13-20-year-olds say they research computer skills during their free time compared to 20% of 21-39-year-olds. Some teens of  color whose families can’t afford the costs of traditional online coding boot camps, have taken matters into their own hands to develop apps, by downloading manuals off iBooks, Googling their questions, scrolling through Reddit for answers and tips, watching as many YouTube tutorials on programming languages, or going on Coursera. For Gen Z, coding is a potential path towards some of their biggest dream jobs, which are also quite different from Millennials. This generation is more likely to see tech as a part of their future.

But the differences in their responses are also rooted somewhat in lifestage. Millennials are more likely than Gen Z to say they want to learn financial / money management skills in the new year. We told you what young people’s top financial goals were last year and Millennials are most likely making it a goal to learn more about how to manage their finances. Because Millennials are at an age where they’re taking their finances and investments more seriously, they’re clearly making it a skill to prioritize in the new year, especially nearly two years into the pandemic—a time when many young people’s finances and employment were heavily impacted. It should also be noted that in the same realm of finances and investing, trading skills / cryptocurrency is another top skill that many Millennials say they want to learn in 2022. We told you last year that Millennials are much more interested in investing in cryptocurrency than Gen Z, and that’s clearly still the case entering 2022. Entrepreneurial / business skills is another skill that Millennials are more likely to rank higher than Gen Z. We told you that becoming a business owner / entrepreneur is Millennials’ top dream job, and many of them are seemingly prioritizing learning those new skills to achieve that dream. Our What’s Next For Work trend report found that entrepreneurship is attractive to both generations in a post-COVID world, and Millennials are more likely than Gen Z to say they aspire to be entrepreneurs. In fact, 9% of Millennials who left their job in the last year did so to start their own businesses. Given that the older generation is more likely to be financially stable and have more job experience than their younger counterparts, they are likely more confident in taking the step of working for themselves, and acquiring the skills they need to be able to do so.

Learning a new language / foreign language is a skill that made both Gen Z and Millennials’ rankings. Duolingo, whose Duo the Owl mascot has become somewhat of a celebrity on TikTok, recently released their 2021 language report which revealed that the top five languages learned on the app last year were Spanish, English, French, and German, with Korean “rising in popularity worldwide.” Eighty percent used the mobile app to conduct lessons. More than two-thirds of respondents say a “cultural event” inspires them to try to pick up a new language, with 29% reporting that TikTok videos in other languages served as motivation—with that number even higher among Gen Z users at 40%. Among those who were inspired by a show to learn a new language, 37% started lessons in Spanish after watching Money Heist, 28% decided to learn Korean after watching Squid Game, and 20% took up French after watching Emily in Paris. For years, YPulse has been tracking young people’s interest in other cultures, and it’s clear they want to learn even more in 2022 especially as more international content is expected to take off in the new year.

Many of the skills that Gen Z and Millennials want to learn this year are tied to their passions and dream jobs. And as young people continue to pursue their passions and ambitions, brands would be wise to find ways to support them as they teach themselves new skills.