How Many Young People Actually Want to Apply For a Job on TikTok?

Headlines about The Great Resignation have been everywhere lately, after the Labor Department reported that 4 million people left their jobs in April of this year alone. YPulse’s 2021 employment and careers report also found that 63% of employed 18-24-year-olds plan to get a new job within the next year, compared to 56% in 2020. And of course, some industries are more impacted by rising resignations than other, with Fast Company pointing out that retail and hospitality, manufacturing, technology, and healthcare are being “the hardest hit.” Regardless, YPulse data shows there are many young people looking for jobs now or in the near future. But how they find those jobs may be in for a change.

Currently, job platforms like Indeed are some of the most popular ways young people are looking for work. But Gen Z is aging into the professional world, and they discover almost everything on social media—which is also where many are turning for career advice. Videos sharing career tips on how to land jobs have skyrocketed in popularity in the last year: the hashtag #resume has 370 million views, while #careeradvice currently has 1.5 billion views. The platform has been cultivating their own career-related videos about interview tips or job skills along with other how-to content According to VICE, young people have been using the app to look for work, transforming their written résumés into short videos showcasing their skills and strengths and sharing them on TikTok. Some, like @alyshea who started the trend, have been able to land positions at their dream companies.

In the wake of this trend, TikTok has launched a new #TikTokResumes feature, which allows companies to share open roles on the app and invite young job-seekers to submit a video resume. More than 30 brands are now part of a short-term pilot program testing the new job application tool TikTok Resumes on the app from for the month of July. Alo Yoga is using the new feature to hire a social media manager that will develop the brand’s TikTok strategy, Allrecipes is looking for an on-camera host/producer, and Chipotle, Target, Sweetgreen, and Great Clips are also using TikTok Resumes to fill a variety of in-store and warehouse positions. All users have to do is create a video resume, post it to TikTok, and send the clip to recruiters on the app.

TikTok is potentially ushering in a new era of social media-based job hunting—but how many young people actually want to apply for a job on social platforms? Today we used our on-demand survey platform PULSE to ask young people if they would use social media to apply for jobs, and whether they are for TikTok upcoming #TikTokResumes feature to do so. We found that overwhelmingly, young people are interested in applying for a job via social media: 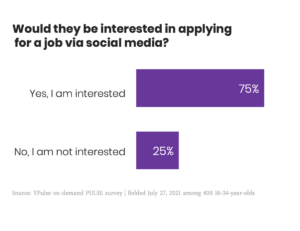 Our survey today indicates that most (75%) of 16-34-year-olds are interested in using social media to apply for jobs. Gen Z and Millennials are using social media to discover music, media, products, new friends, and more—so for them, it likely feels like a natural step to find jobs there as well. Of course, as we mentioned, digital platforms like Indeed are currently dominating young peoples’ job hunts (followed by friends and family connections) so while they’re interested in applying for jobs on social, it’s not currently their norm. For social media to become job hunting go-tos they’ll likely need to promote features like TikTok Resumes that are specifically built for young prospective employees and the brands that want to find them. What platforms have the biggest opportunity to tap into this interest? We also asked which they would be interested in using for job applications: 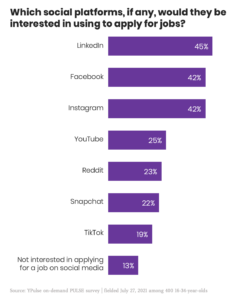 When shown the options of platforms they could apply on, including LinkedIn, the number of young people who would apply for a job via social media increases to 87%. As you can see, LinkedIn (unsurprisingly) tops the ranking of platforms they’re interested in using for job applications. But Facebook and Instagram follow very closely behind, with 42% of young people telling us they would be interested in applying for jobs on those platforms. YPulse’s most recent social media monitor report shows that Facebook and Instagram are the top social platforms that young consumers are using (by far), so their relative popularity as job-seeking platforms makes sense. While fewer young people tell us they would be interested in using YouTube, Reddit, or Snapchat to apply for jobs.

Meanwhile, TikTok actually had the lowest interest among 16-34-year-olds at 19%. But as the #TikTokResumes feature is brand new, it’s likely that many young people don’t yet know about the tool. So for our next question, we explained, “TikTok is launching a new feature called TikTok Resumes that will let companies share open roles on the app and invite young job-seekers to submit a video resume.” We then specifically asked about their interest in using #TikTokResumes: 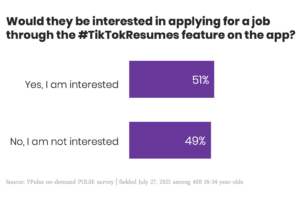 Once they have a better understanding of TikTok’s new job application feature, half of young people tell us they’re interested in using it. An impressive number, considering 43% of 13-39-year-olds overall currently use TikTok. So far, the feature appears to be a success on the app as well: TikTokResumes currently has 264M views, and TikTok just reported that users submitted 800 video resumes within the first 48 hours of launch and has since received “hundreds of submissions” to date. The interest in the tool is also dependent on what kind of industry young consumers are looking to get into. The most popular positions that seem to be circulating on the platform include roles related to social media or video editing/production as well as those in retail and hospitality industries.

Looking at our overall data, what brands can take away from this is that there’s a general interest among all young consumers to apply for jobs across various social media platforms, so brands have an opportunity to reach young employees there—especially if tools are being built specifically for job hunting on the apps.