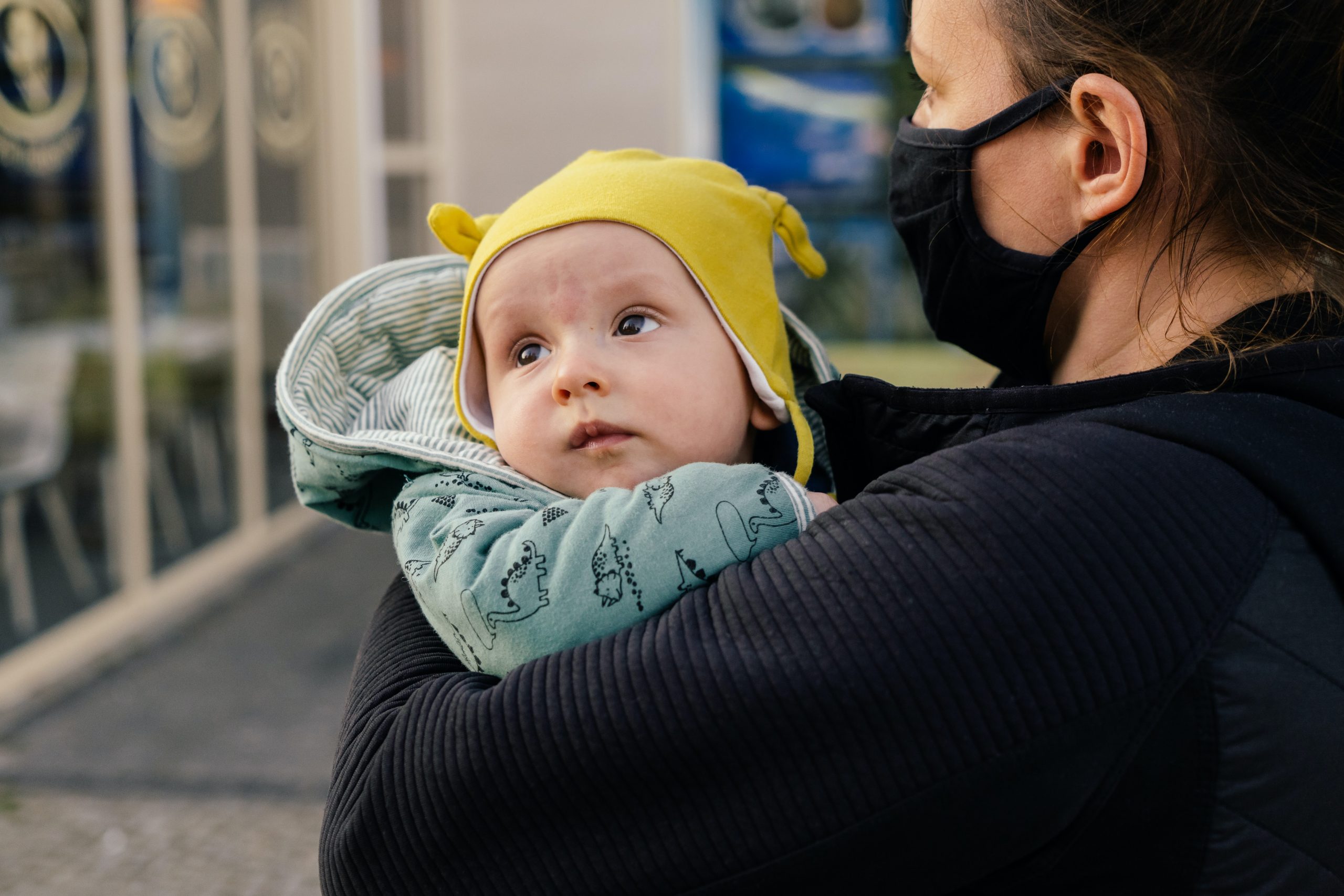 YPulse’s most recent Millennial Parenting report found that 43% of 20-38-year-olds are now parents, and 42% are want to be parents in the future. As more Millennials enter their “parenting prime,” economists predict a significant shift in spending from discretionary purchases to necessities—with 90% of spending going toward mortgage interest, vehicles, gasoline, furniture, toys, and children’s clothing. And this generation of parents are already boosting up many brands during this time as their needs and buying drastically shift.

It’s been quite a year to be a parent. The majority of Millennial parents have kids under the age of nine-years-old, the majority are currently employed, and Millennial parents are more likely than non-parents to work from home. With young children to manage care for, this generation of parents has been juggling a unique amount of pressure and responsibility during COVID. YPulse’s research on Millennial parents looks at their new realities, and found some of the significant ways that their parenting has had to change this year: 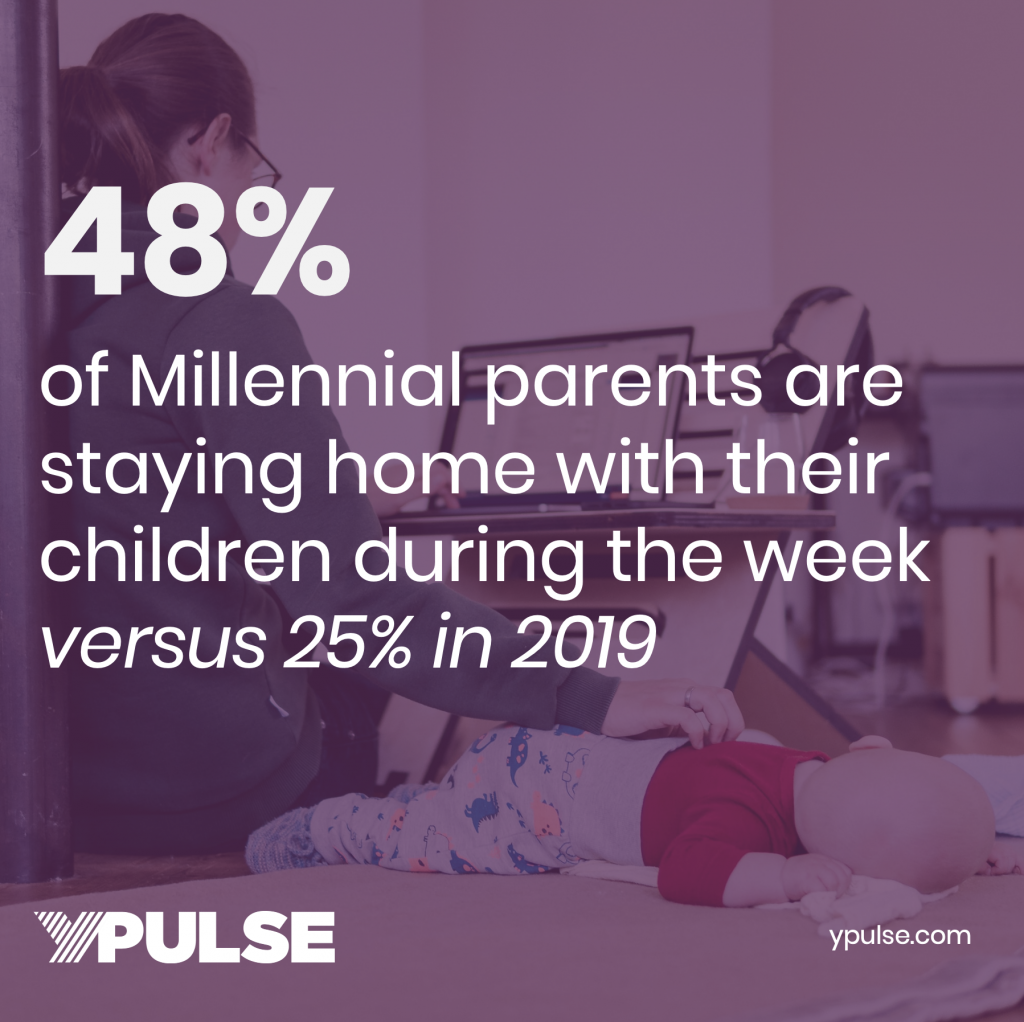 Half of Millennial parents have been staying home with their children during the week.

The number of Millennial parents who report staying home with their children during the week has nearly doubled, from 25% in 2019 to 48% this year. The number who report that their children are in school during the week has declined drastically, from 37% in 2019 to 16% in 2020. With many students going to school remotely or in hybrid learning situations, many Millennial parents are now working from home while managing their children’s education. The New York Times reported that As COVID persists, some have been frustrated with remote learning and are instead teaming up with other families for alternative ways to teach their kids. Learning pods (a mix of the school’s remote curriculum, supervised care, and enrichment activities) and microschools (“very small schools that usually have a specific culture” based inside or outside a home), are the most popular options right now. But of course many Millennial parents are caring for very young children, with roughly a third reporting that their children are in the newborn to four years old age range. For these parents, just keeping kids occupied and entertained has been the priority—and in fact 76% of Millennial parents overall agree with the statement, “I am constantly researching ways to entertain my kid(s) during quarantine.” 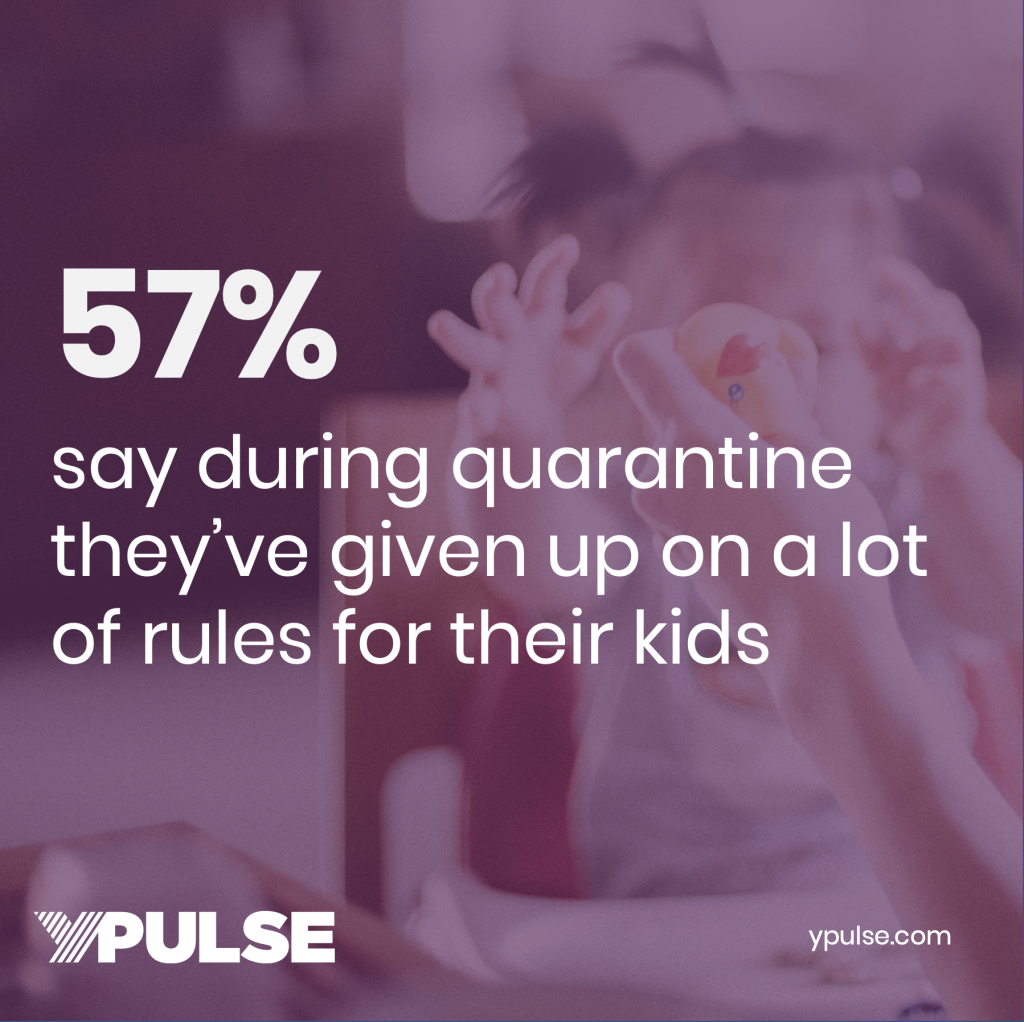 The majority say during quarantine they’ve given up on a lot of rules for their kids.

With their day-to-day realities looking completely different from last year and so many taking on childcare and more education responsibilities, it’s probably not too much of a surprise to hear that 57% of Millennial parents say that during quarantine they’ve given up on a lot of rules for their kids. Dads were even more likely to agree with this statement than moms, with 65% of males saying they’ve given up on rules versus 49% of females. Our research shows that the rules that are being relaxes span everything from how much screentime is being allowed to what foods are being permitted. But the lifting of rules doesn’t mean that Millennial parents have given up or that they feel badly about their performance as parents. Instead, the majority tell us they have become better parents because of quarantines. Brands can certainly speak to their new attitudes by acknowledging that old rules no longer apply, and that it could be a good thing. 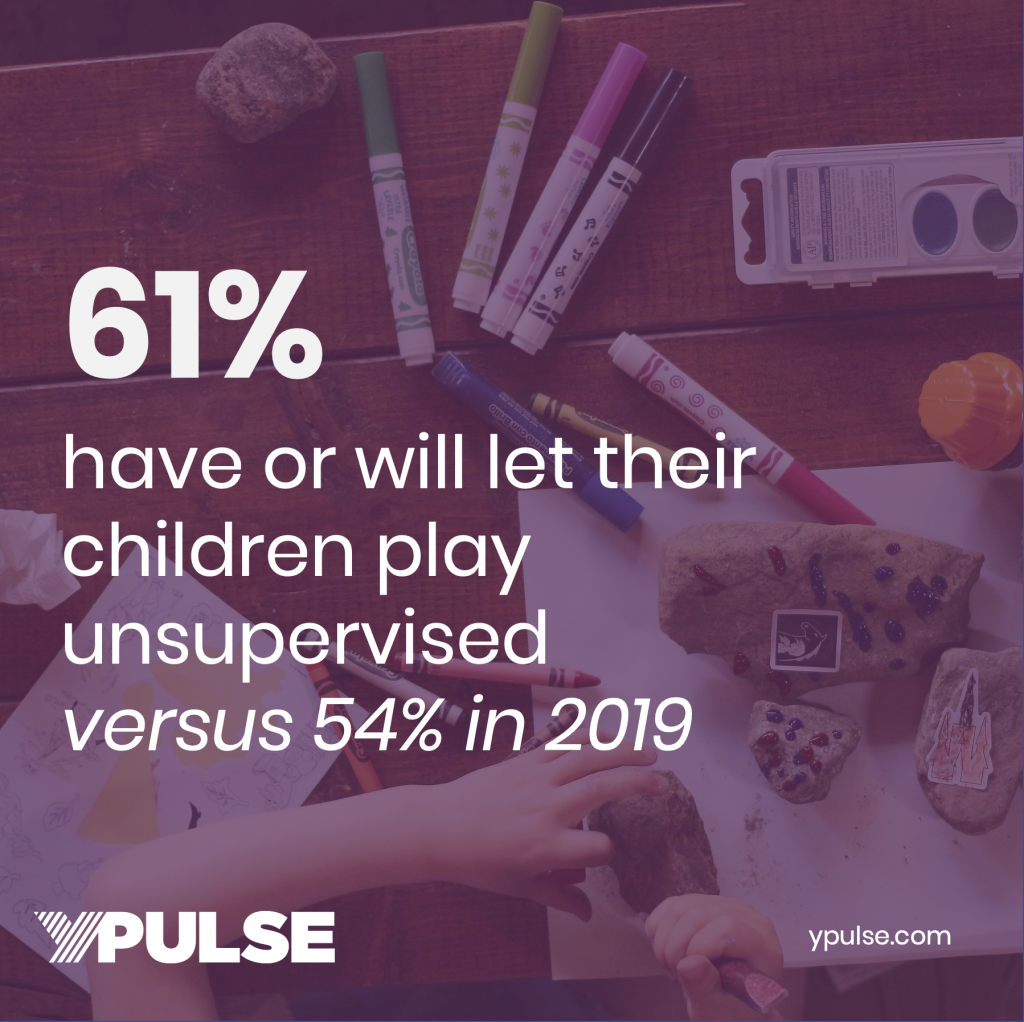 Most will now let their children play unsupervised.

another sign of Millennial parents more relaxed attitudes? The number who say that they allow their kids to play unsupervised has increased from 54% in 2019 to 61% now. This increase in unsupervised play has plenty of implications in terms of how kids are spending their time, but also clear takeaways for brands. Products that can be used without mom and dad’s watchful eye nearby are in-demand. Back in April, Kidscreen reported that parents were buying up puzzles, books, and toys to entertain quarantined kids offscreen, and sales of games and puzzles jumped 228%. The desire for safe and simple playthings has only continued. Recently BuzzFeed put a spotlight on the intense parent fandom around the Nugget play couch which can be used for fort building, jumping, and general “toddler mayhem.” It’s become so popular that the manufacturer is having a difficult time keeping it in stock, and resellers are price gouging the item on sites like eBay and Facebook Marketplace. 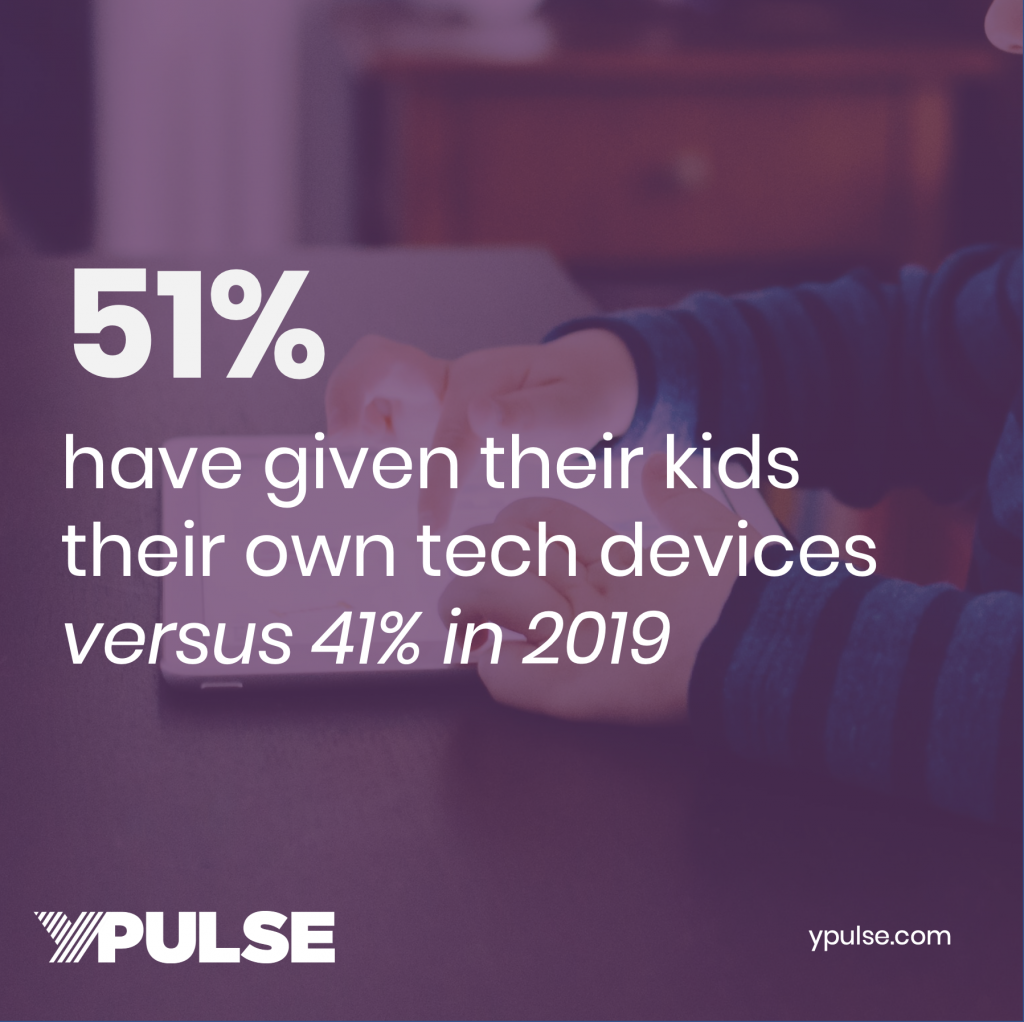 Half have given their kids their own tech devices.

Of course, it’s not just offline playthings that are getting a boost from Millennial parenting shifts. This generation has always been reliant on tech solutions, with 63% telling us in 2019 that they let their kids play with their phone or tablet to keep them occupied. Now, we’ve found that kids are more likely than ever to have their own tech, with 51% of Millennial parents saying they have given children their own devices—and increase from 41% in 2019. Phones and tablets are of course major distractions for kids, but according to an Internet Matters report, Alexa and Siri will “become common” in children’s bedrooms as smart speakers for kids become more popular as well. Popular toy companies like Jazwares are even testing ways for kids to be able to play with their toys while they’re connected to Alexa-enabled devices.