Facebook spent an estimated $10 million on their first-ever Super Bowl spot. We looked to our youth brand tracker to see if the big game commercial made an impact with young consumers…

It’s no secret that, as a whole, live sports are struggling to draw young viewers. But the Super Bowl remains a live spectacle that continues to draw eyes. Super Bowl 2020 ratings increased from 2019, with some counts putting viewing numbers at over 100 million. According to YPulse’s Super Bowl survey, 71% of 13-39-year-olds watched the game in some way this year. For a difficult-to-reach demographic, the live showdown is still a significant draw, and arguably one of the few times that young consumers are actually paying attention to ads. This year, brands spent an average of $5.6 million to have a piece of that viewership for 30 seconds—an increase from $5.2 million in 2019.

But do those (very expensive) ads actually have an impact on brand perceptions among young viewers? To measure the impact of one of the biggest marketing events of the year, we turned to our ongoing youth brand tracker, which collects 100,000 interviews with 13-39-year-olds annually, tracking over 400 brands across 16 distinct diagnostics—from what brands are cool to what brands they want to buy. Combined, those diagnostics give us a brand’s Yscore, an overall reflection of their current standing Gen Z and Millennials.

Our Brand Tracking Super Bowl LIV report compares the pre- and post-game brand scores for 11 of the brands who spent millions on a commercial for the game this year. By looking at their performance two weeks prior to and following Super Bowl LIV, we explored how opinions and attitudes among young viewers changed (or didn’t) as a result of the advertising that aired. Today, we’re giving you a look at the results of one brand. 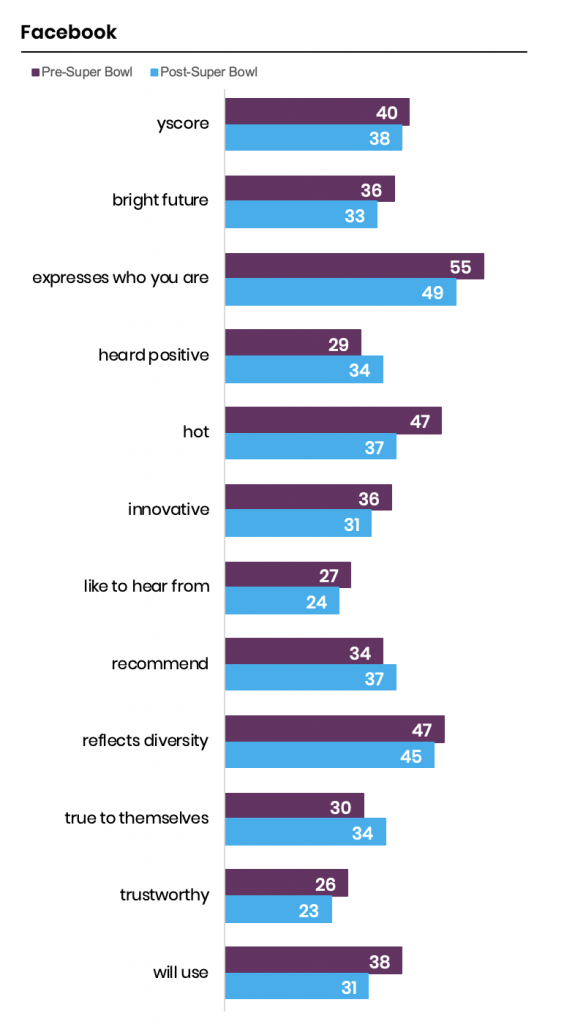 This year, Facebook made its Super Bowl debut with a full 60-second ad. The super-sized slot was a pricey ticket into viewers’ homes: Business Insider estimates that the social media brand spent more than $10 million for airtime alone on their massive ad, as much as Trump and Bloomberg paid for their minute-long commercials.

The brand also tapped a tried and true Super Bowl marketing trend: star power. Two months before the big game, actor Sylvester Stallone posted a cryptic teaser on Twitter of himself in front of the Rocky statue that quickly went viral. The social media giant quickly confirmed that their first Super Bowl ad would feature the Rocky star and Chris Rock, who also starred in a series of pre-game clips getting “ready to rock.” The teasers made some believe the spot would be a buddy comedy with the two actors, but instead, the commercial focused on celebrating everyday people from an array of Facebook groups.

Set to “I Wanna Rock” by Twisted Sister, the spot promoted the diversity of Facebook groups—in this case, any related to the word “rock” (rock climbing, rocking chairs, experiment rocketry, and a Rocky Balboa group, to name a few). All of the groups featured are real, and Facebook tells Fast Company the spot is an “homage” to the people who connect through the feature and “make the platform what it is.” Putting the focus on Facebook Groups continues their effort to pivot their functionality to more private interactions. But the ad’s focus on the ways that Facebook can bring people together is also a clear attempt to rebuild positive affinity for the brand after years of growing mistrust. Did it work?

When we look at the brand’s scores before and after the game, it’s clear that Facebook’s big-budget Super Bowl ad didn’t necessarily make much of an impression with young consumers. Post-game, their Yscore was not significantly impacted, dropping a couple of points, and there were no significant increases in their individual diagnostics. In fact, Facebook’s “express who they are,” “hot,” “bright future,” “innovative,” and “will use” scores all dropped, speaking clearly to the ongoing perception issues that the platform is having. Despite the ad’s message, “trustworthy” and “reflects diversity” scores also declined. The commercial wasn’t enough to shift brand perception. Viewership wasn’t the problem—the ad has been viewed 22 million times on YouTube—but we’ve learned that view counts are just a piece of a successful campaign.

For this particular brand, affinity problems run too deep for a single ad to fix. It’s no secret that the social media giant has struggled to capture young users, so it’s not much of a surprise that their ad didn’t reverse the tide. While the majority of Millennials still use the platform daily, only a quarter of Gen Z tell YPulse that they are Facebook users. And of course, distrust in social media giants (and tech giants in general) has been increasing significantly over the last few years: less than half of Gen Z and Millennials tell YPulse they trust social media companies.

Of course, a new focus on groups—which the Super Bowl ad was promoting—is one way that the brand is trying to bring Gen Z and Millennials around. But judging by their brand scores, a $10 million Super Bowl commercial wasn’t enough to change their minds. 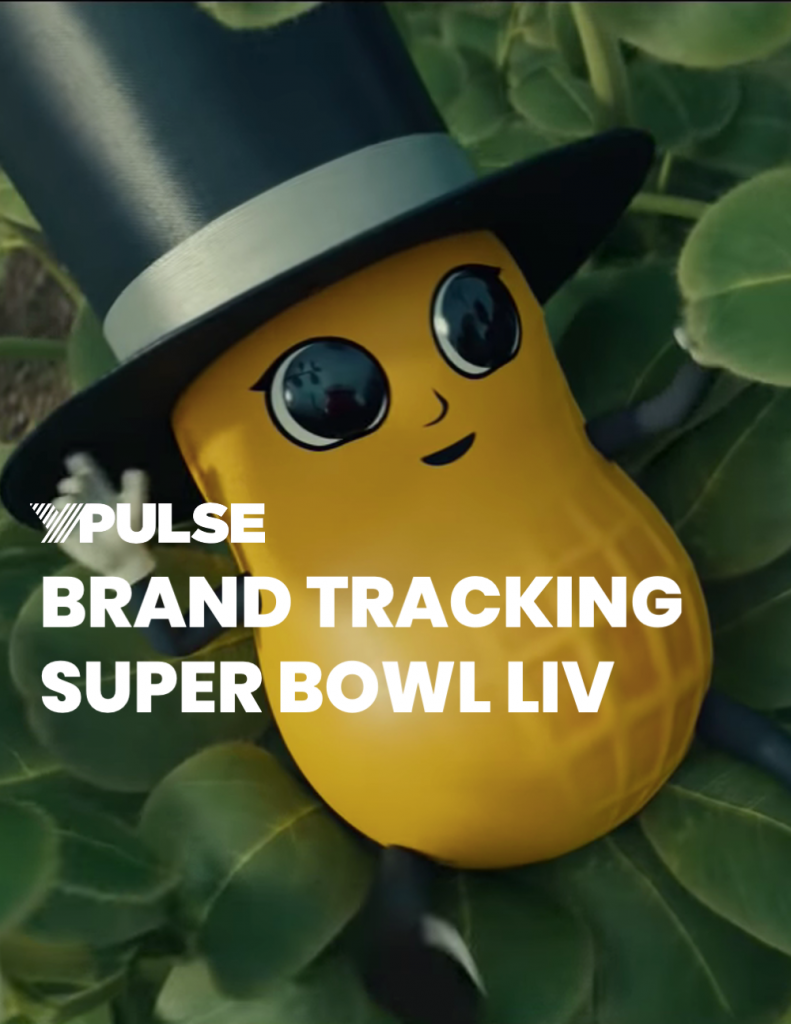 JanSport Isn’t Afraid to Tackle Hot Button Issues to Stay Relevant with Gen Z
This 50-year-old backpack brand is staying relevant with young consumers by addressing ...
3 Marketing Lessons from the 2021 Super Bowl
From memes to anti-ads, last night’s big game was full of lessons on marketing to young...
5 Social Platforms to Watch in 2021
As young users turn to new spaces to creatively express themselves and stay connected w...