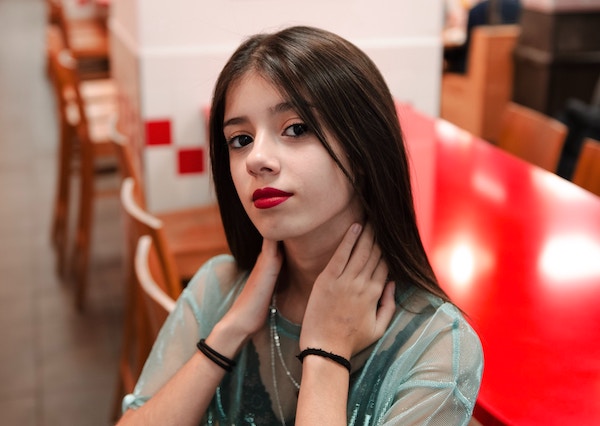 Competing for Gen Z and Millennials’ approval has also made restaurant marketing an all-out war. Fast food restaurants have established themselves as some of the sassiest social media accounts on the internet, and friendly rivalries between the chains vying for young consumers’ dining dollars are frequent. Whether responding to one another’s tweets or calling out competitors for missteps, they’re not afraid to start some shade wars online. These brands are also constantly innovating with new marketing to try to get young consumers’ attention: Wendy’s is upgrading their in-restaurant experience with personalized playlists, Taco Bell is testing vegetarian and vegan menus this year, and Dunkin’ and IHOP have released limited edition beers, just to name a few of the major marketing moves being made in the name of capturing these next generation diners.

To see who’s winning the race, we checked in on YPulse’s youth brand tracker, which measures the perceptions of 13-39-year-old consumers across 400+ brands and 81,000 interviews annually—looking at everything from what brands they plan to buy, which are cool, and which are their favorites. Here’s the current ranking of the chain restaurants that came to the top of that list: 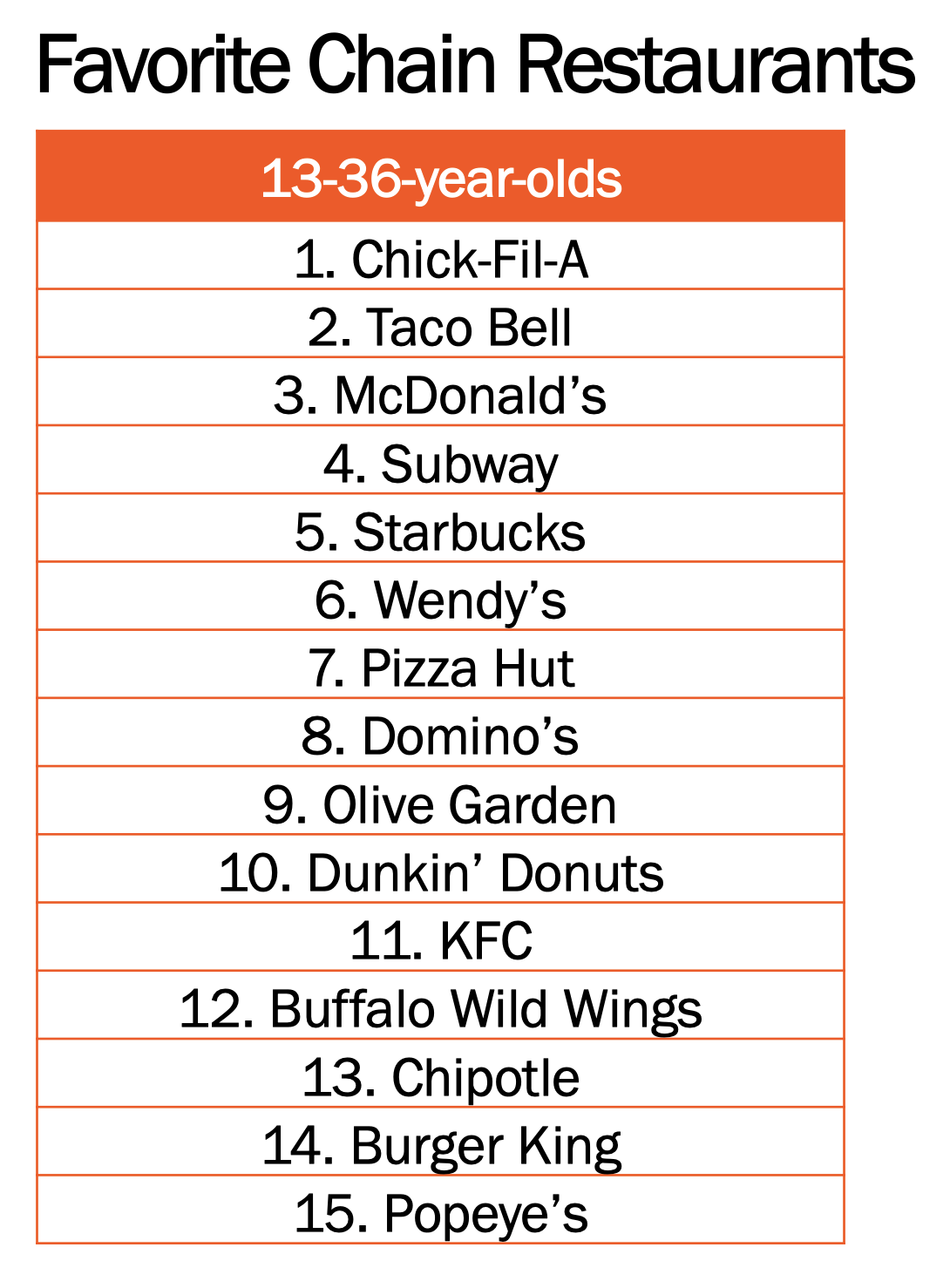 *YPulse’s youth brand tracker measures young consumers’ relationships with a brand based on a weighted six-point scale, ranging from “Never heard of this brand” to “This brand is one of my favorites.” These are the top brands that were rated as one of their favorites among those who are aware of the brand. The brands on this list are among the almost 400 brands included in the brand tracker as of 3/20/2019. Rankings are subject to change as more brands are added and removed.

Chick-Fil-A is at the top of the list of young consumers’ favorite chain restaurants, followed by Taco Bell. Where Chick-Fil-A is especially outshining others is in their word-of-mouth buzz: they score higher than Taco Bell, McDonald’s, Subway, and everyone else as a brand that young consumers have heard positive things about, that they like to hear from, and that they recommend. Despite a past full of polarizing political donations, young consumers still love Chick-Fil-A, and their word-of-mouth support suggests that it’s because they’re truly passionate about the brands’ products. In short: they think Chick-Fil-A is delicious. Their sales are reflecting this, with numbers reportedly up in both 2017 and 2018.

There is one important caveat: While Chick-Fil-A might be at the top of the favorites ranking, when we look at the top QSR brands they plan to use/buy, Subway is actually number one. Why? For one, Subway is everywhere, with over 43K restaurants worldwide—more than McDonald’s and Starbucks. That being said, Subway’s sales have been on decline, so their ubiquitous-ness might be making them a convenient choice, but they’re not inspiring quite as much passion as their competitors. 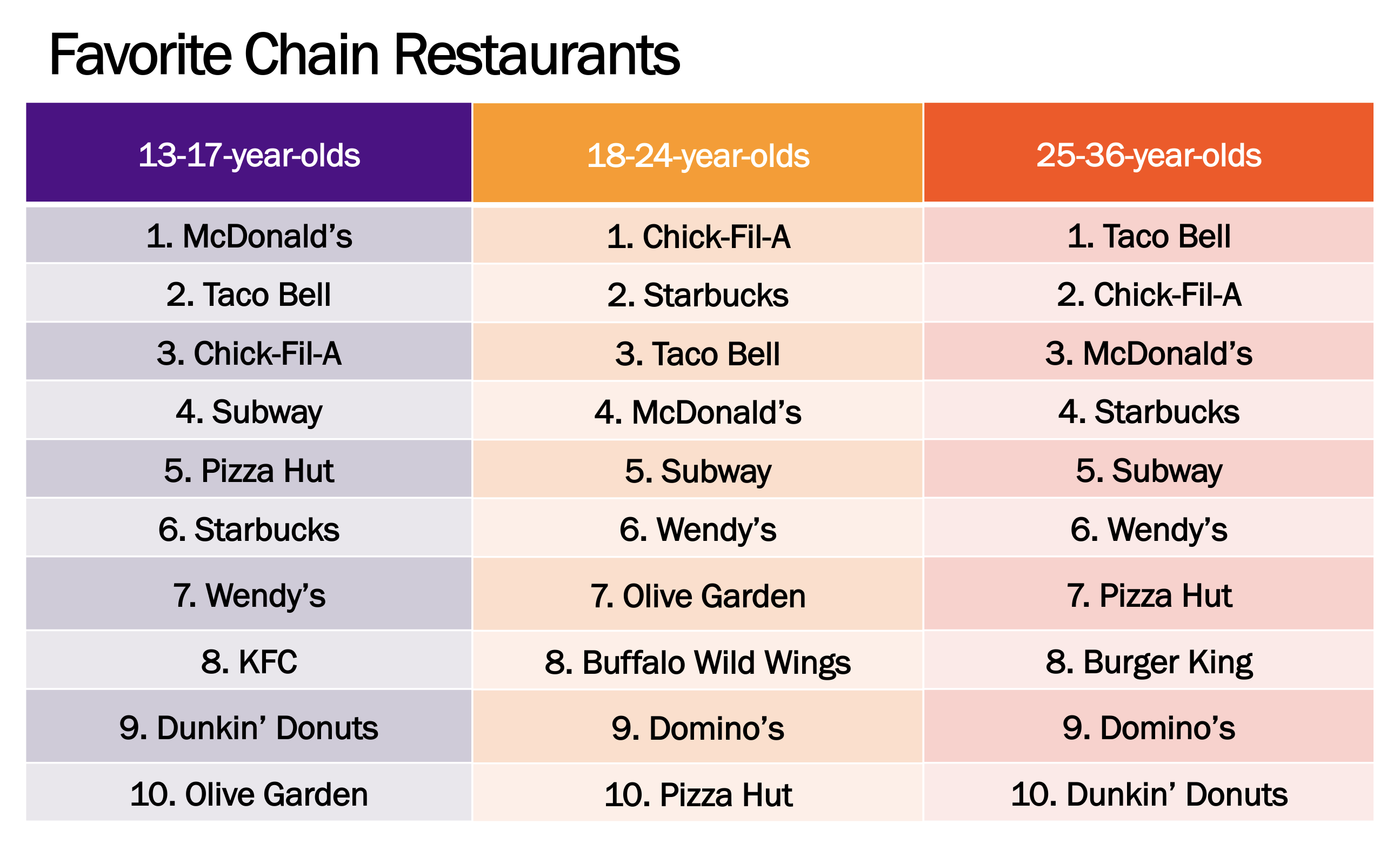 Chick-Fil-A sits at the top of the list of favorite chain restaurants among 18-24-year-olds, but McDonald’s is number one among Gen Z teens, and Taco Bell is at the top among 25-36-year-olds. That’s right, the three age groups here have affinity for three different chains. That said, McDonald’s, Taco Bell, and Chick-Fil-A are close to the top on each ranking. One name we don’t see on any of the top 10 lists here is Chipotle, which is clearly still struggling to win young consumers over again.

On both our overall list and these age-specific rankings, we can see that fast food brands are more likely to be named as favorites than fast casual or casual dining spots. Whether this is because of the frequency at which they’re dining at fast food spots or because of fast food brands’ more innovative marketing is hard to say, but it indicates that casual dining brands especially have more to do to get Gen Z and Millennial fans.