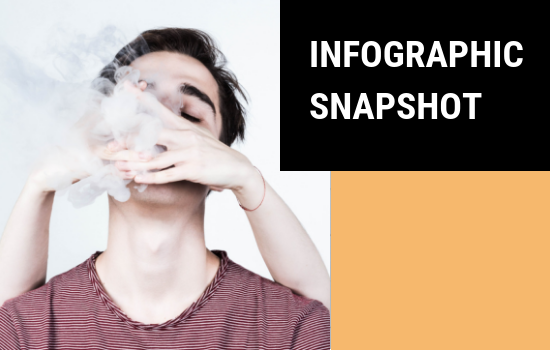 Vaping’s surging popularity among Gen Z is alarming the FDA, parents, school administrators, and others. In the midst of increasing regulation efforts, we asked teens to tell us how they feel about the “epidemic” and outlined their responses in an infographic snapshot…

Risky behavior is down among teens—except when it comes to vaping. While the percentage of teens who said they’d been drunk dropped from 46% in the 1990s to 26% in 2017, the percentage of teens who said they’ve vaped nicotine in the past year has increased to at least 19% of high school seniors, 16% of sophomores, and 8% of eighth-graders. E-cigarettes—the devices that emit vaporized nicotine or non-nicotine solutions—were originally positioned as tools to help heavy users quit smoking cigarettes. But the popularity of vaping is now credited with introducing more teens to tobacco in the past few years: traditional cigarette use among high school students has risen to 8.1% this year from 7.6% in 2016, according to preliminary data from the Centers for Disease Control and Prevention’s annual National Youth Tobacco Survey, reversing a year-over-year decline that started in 1997.

The FDA is now calling teen vaping “an epidemic,” and in an effort to regulate, they’ve set their sights on Juul Labs Inc.—a company, high schoolers say, that has become just as popular among them as Glossier, Fila, and Birkenstock. The startup has captured almost half the e-cigarette market, gaining popularity with their range of flavors, high dose of nicotine, and devices that resemble thumb drives (making them hard to spot by parents, teachers, and administrators). However, it’s not only design that has turned Juul devices into a status symbol among teens. The devices’ booming popularity also has to do with their social media appeal. According to recent research published in the Journal of Adolescent Health, kids 17-years-old and under make up a quarter of Juul’s followers on Twitter. “Juul’s posts go out to its followers, those users then retweet into their own accounts, and the message gets propagated within the social network, ultimately reaching a lot of adolescents’ accounts in a small time period,” study author Dr. Jon-Patrick Allem told CBS News.

Recently, Juul told CBS This Morning that their intention was never to attract teens, and they’ve since changed their marketing approach, including upping the age of campaign actors from 21 to 35, redesigning their site, simplifying their flavor’s names (nixing the “cool” from “cool cucumber”), and more. However, the FDA is far from convinced. Last month, the agency announced that Juul and other e-cigarette makers have 60 days to prove that they can keep their products out of teens’ hands. They also plan to send warning letters to over 1,100 retailers, like Walgreens and 7-Eleven, and fine over 131, mostly for the illegal sale of e-cigarettes.

Teens aren’t in the dark about the dangers of vaping. In fact, six in seven 13-17-year-olds tell us vaping is just as addictive as cigarettes and 82% say that vaping companies are specifically targeting them. To see even more on teens’ feelings towards vaping, take a look at our Infographic Snapshot: