Where Young People Stand On Religion, In 5 Stats 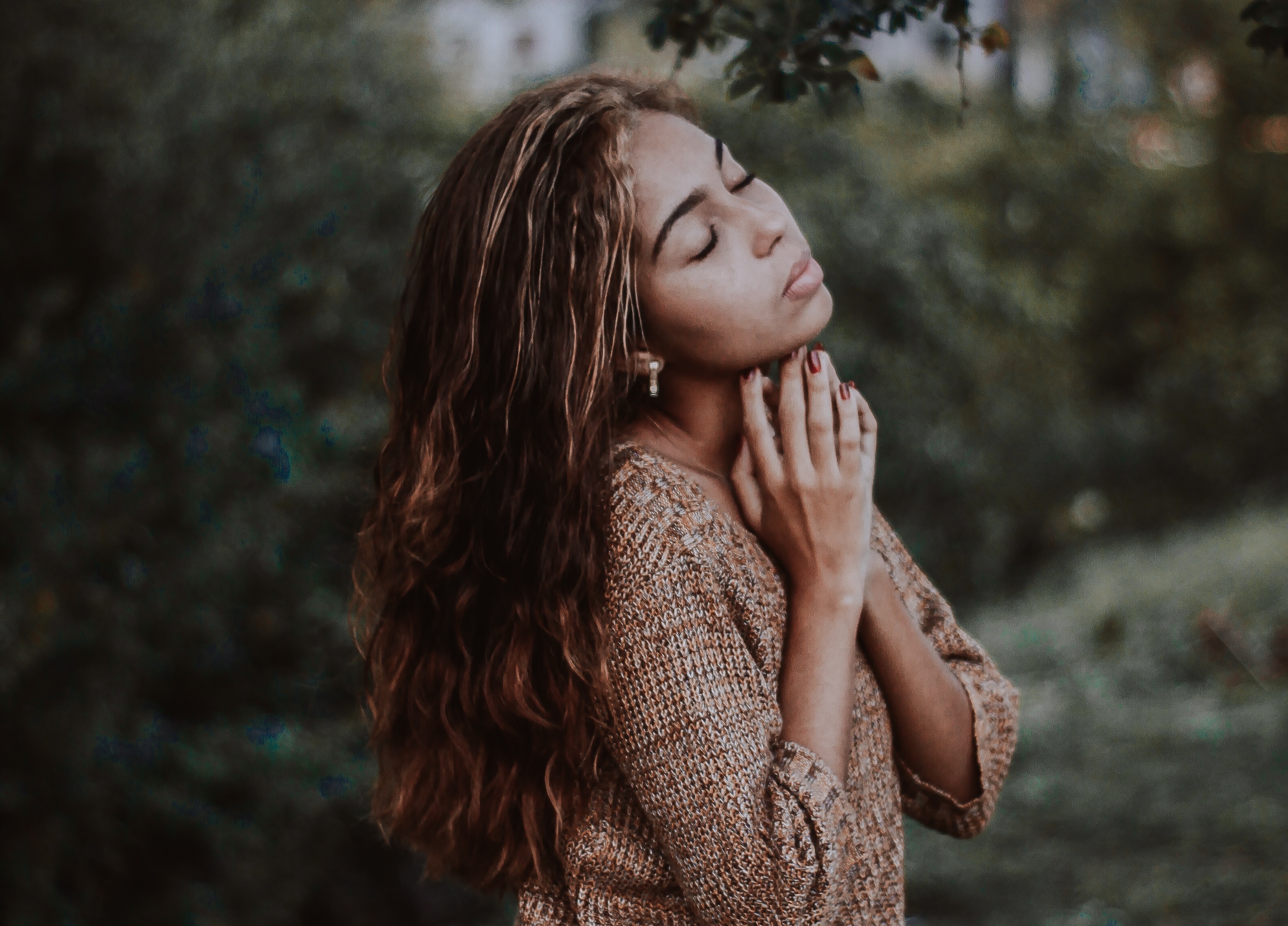 After years of stories about Millennials “turning their backs on religion,” we’ve got the truth about the religious beliefs of 13-35-year-olds today…

Millennials have been called the least religious generation to date for about as long as they’ve been able to pick up a bible, and it’s been expected that Gen Z will join the older gen’s atheist ranks—recent articles have claimed that “Atheism Doubles Among Generation Z” and offered to explain “Why Generation Z is less Christian than ever.” And while the story has long been that all these young consumers are flocking away from organized religion and into the more amorphous moniker of “spirituality,” that line of thinking seemed to reach a fever pitch this year as new headlines about Millennials stirred up the idea that they have begun to devote themselves to psychics, horoscopes, and star charts en masse. MarketWatch’s piece, “Why Millennials Are Ditching Religion For Witchcraft And Astrology,” made the case that the generation is interested in more spiritual practices, including the occult and strong beliefs in birth signs, in lieu of religion. Inc.’s “Millennials Are Giving Up On God. This is What They’re Reaching For Instead” and more articles of the same nature soon followed. But these catchy headlines don’t necessarily capture the full story of the increasing interest in the mystical—as we explored in our recent trend Practical Magic—nor does it capture their true feelings about religion. As in years past, the idea that Millennials and Gen Z are “turning their backs” on religion is an oversimplification of their beliefs. In fact, just four in 10 13-35-year-olds agree that organized religion is a thing of the past.

To get a better understanding of the generation’s relationship with religion and spirituality, our recent survey asked them everything from their thoughts on religion versus spirituality to whether they believe in God, what role religion plays in their daily lives, and more. From that research, we know that Millennials and Gen Z’s view of religion is hardly cut and dry, and though they may be less traditionally religious than previous generations, they still believe in plenty. Here’s a snapshot of young consumers, religion, and spirituality, in five stats: 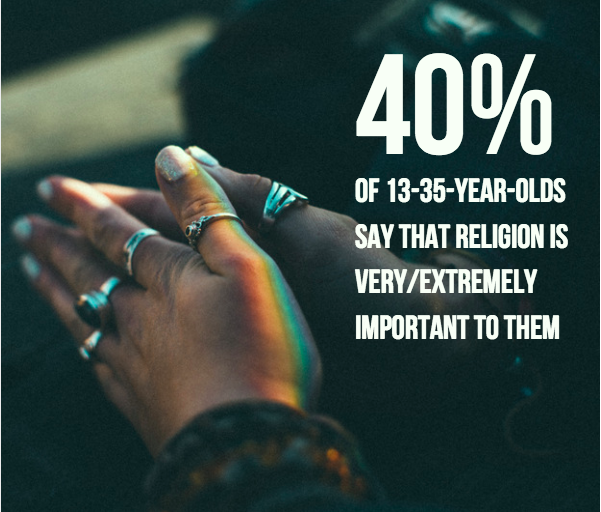 1. Four in 10 Millennials and Gen Z say religion is very important to them

A larger portion of 13-35-year-olds say religion is important to them than those who say it is not—but by a small margin. Thirty-six percent of Millennials and Gen Z say religion is not at all/not very important and 24% say it’s somewhat important. Sure, those gaps aren’t huge, but it does show that many young people still find religion to be a significant part of their lives, contrary to the popular notion that faith has given up the ghost. However, there’s been a drop in the number of devotees since last year—in 2017, 44% of young people told us religion was important to them compared to 40% today, which means all those headlines may have some truth. 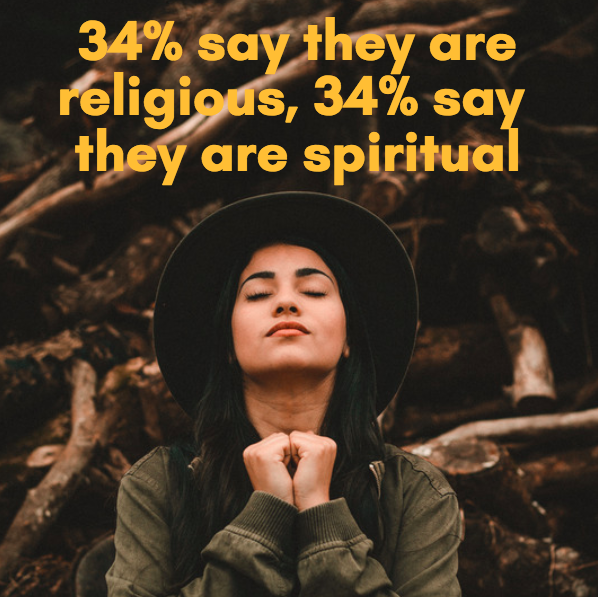 While the many media stories swirling around the “religious vs. spiritual” debate have claimed that the scales have already tipped in favor of the cults of meditation, psychics, and tarot, the reality is that 13-35-year-olds as a whole are divided exactly down the middle when it comes to choosing between the two. When asked to describe themselves as just one, 34% chose religious and 34% chose spiritual. Compare that to 31% who said they are neither and you have a more complicated story: When it comes to their ideologies, 13-35-year-olds span the map. However, there is a margin of difference between Millennials and Gen Z. As it turns out, the younger cohort is more traditional than their older peers: 39% of 13-17-year-olds say they are religious compared to 30% who say they are spiritual. Though this could have to do with the fact that most teens are still living in their parents’ homes, with their parents’ beliefs. 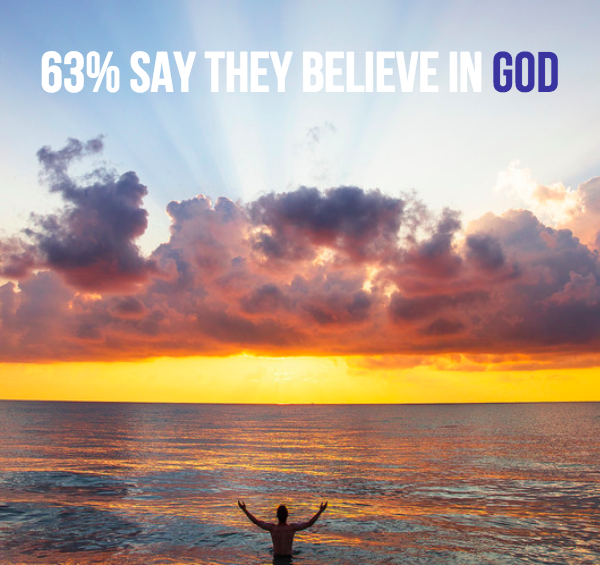 Interestingly, more Millennials and Gen Z say they believe in God than say they are religious, showing that for young people today, religious belief doesn’t have to go hand-in-hand with religious practice. And while the majority of 13-35-year-olds believe in God, the contrast between that belief and their descriptions of themselves could actually have something to do with the influence of spirituality over organized religion today. Where in the past, religion was confined to specific spaces, sects, and practices, in the age of spirituality, faith is an ad hoc enterprise that is personal, not collective. Which leads to… 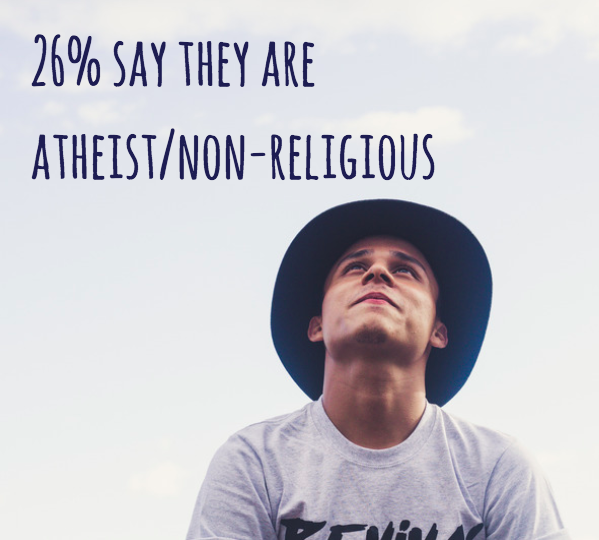 4. Only a quarter consider themselves atheist/non-religious

Though this is certainly the least classically religious generation to date, that does not mean Millennials and Gen Z are inherently atheist or all-around non-religious. With just a quarter of 13-35-year-olds describing their beliefs as atheist or non-religious, the vast majority are still calling on some kind of higher power—whether it’s from a church pew or a yoga mat. 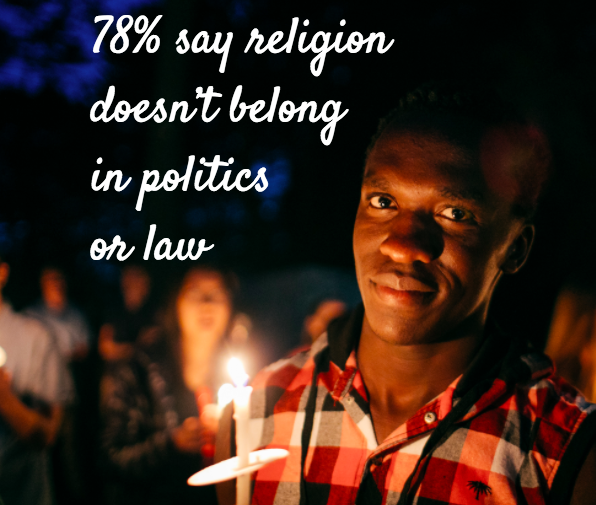 5. The majority believe religion should stay out of politics and the law

While more 13-35-year-olds are religious than mass media would have you believe, that doesn’t mean they’re looking for a meeting of church and state. Across the board, Millennials and Gen Z believe that religion has no place in government. And when we break it down by institution—school, work, government-funded programs—in each instance, the majority of 13-35-year-olds said neither religion nor spirituality belonged in such places. However, more respondents were okay with spirituality being present, showing that they do still maintain a fundamental difference between the two terms.