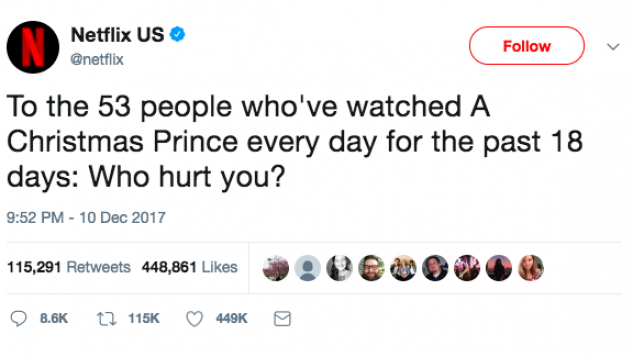 Netflix’s attempt to roast users goes up in flames, a viral and controversial anti-bullying video gains tens of millions of views, everyone is reading this story about Millennial dating, and more links that have taken over the web this week…

Netflix’s attempt to roast users on social media has gone up in flames. The streaming service, which kept user traffic secretive in the past, recently opened up in a press release with insight on binging behavior. On Twitter, they specifically called out the 53 people who watched Netflix’s sappy rom-com A Christmas Prince every day for the past 18 days, asking “Who hurt you?” Many came to the defense of the 53— including Lifetime, who quipped, “If Netflix doesn’t want you, there’s always room on our couch!” But the real criticism came from those who saw the personalized marketing as a creepy look into the data corporations are collecting and how they will use it. As one tweet from @treygraham explained: “Big Brother is watching you, and he’s worried about your emotional health TBH.”

This week, a video of a middle-schooler speaking about being bullied went viral, gained support from various celebrities, and then became entangled in “controversy over racism and money.” It all started when Keaton Jones’s mother filmed him tearfully recounting being bullied in school and sharing a hopeful “it gets better” message to others being bullied. In 24 hours, the video racked up almost 20 million views and earned messages of support from celebrities including Millie Bobby Brown from Stranger Things, Chris Evans from Avengers, and Justin Bieber. However, the anti-bullying message has since been lost in some scandal, as social media screenshots of Keaton’s family in front of confederate flags and both fake and real fundraising campaigns for the family have gone viral.

Everyone is Reading “Cat Person“

A short story about Millennial dating on The New Yorker website has broken records in number of online views, becoming one of the most-read overall pieces for the magazine. “Cat Person,” written by Kristen Roupenian,‏ is the story of Margot and her awkward date/sexual encounter with an older man she meets while working at a cinema. Released at the height of the sexual harassment movement, the story touches on how women may feel pressure to have sex despite very last-minute reservations. The message has led to intense debate, but mostly is being praised for its relatability. As one tweet expressed, “I had no idea how universal this series of emotions is for women…and it makes me sad for all of us.”

The backlash against Chipotle’s new queso is still going strong, with the chain learning this week it can’t even give it away for free. To promote its new queso—recently revamped after initial negative reviews—Chipotle offered it for free on Tuesday as long as customers were wearing a “cheesy sweater.” (To go along with the ugly Christmas sweater craze.) However, a recipe change and the allure of free food was not enough to quell the initial reviews, with many “using the deal as an opportunity to slam Chipotle’s queso.” Facebook commenters and tweeters not willing to give the dip a second chance, once again reiterated its bad taste, telling the chain to just “pull the plug.”

Seedless avocados are here to prevent a trending Millennial injury, the beauty world is enamored with this new galaxy look, Gigi Hadid is once again in the news (this time for her armpit hair), and Regal Cinemas excites Cheetos lovers with their new popcorn option. 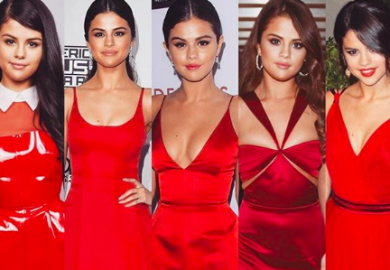