What buzzed about tech items do Gen Z & Millennials actually want for the holidays? The latest smartphones, OTT streaming devices, and smart speakers all earn a lot of chatter, but we asked young consumers which are actually on their holiday wishlists…

Of course, these shopping holidays have become synonymous with getting deals on some of the hottest tech of the season. When we asked what Millennials & Gen Z were planning to buy on Black Friday & Cyber Monday, tech items filled the top 10 list—with just a general plan to buy “electronics” ranking at number four. And while several of the top items on their overall holiday wishlists are things you won’t find in stores, young consumers’ love for tech is apparent there as well, with smartphones and gaming consoles easily making the most-wanted list.

The last months of the year are filled with marketing for the latest and greatest gadgets. The cute (and super high tech) robot Cozmo is breaking out of Reddit-themed escape rooms, and Nintendo is launching 17 pop-up shops to give fans hands-on time with their products. But all the smart marketing in the world might not be able to create demand among young consumers. So what specific hot tech items are they eyeing this season? In our most recent monthly survey of 1000 13-35-year-olds, we also asked about some of the most buzzed about tech items of the moment—from smart speakers to VR headsets—to find out which of the hot devices on the market are actually making their holiday wishlists. Here’s the top ranking: 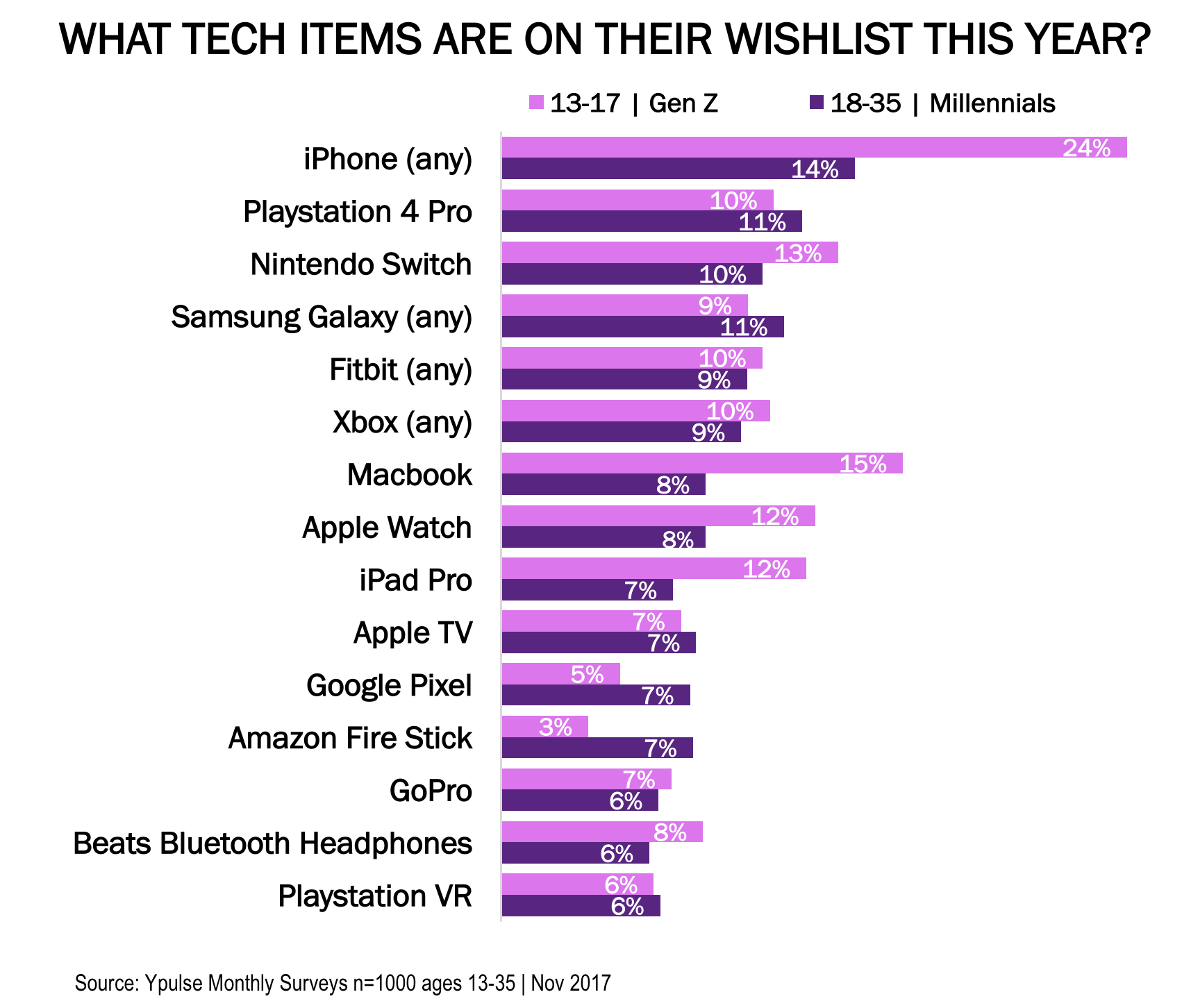 One note before we delve into the tech wishlist: about a third of respondents told us that none of the hot devices that we listed were on their holiday wishlist, a good reminder that things like clothing and experiences are just as in-demand with these generations this holiday.

But looking at the top-ranking tech devices they do want, iPhone made the top of the list—especially among Gen Z. The younger consumers were more likely to say they wanted an iPhone than any other device, and much more likely than Millennials to have an iPhone on their list. While the popular smartphone ranked highest among Millennials as well, it was followed closely by Playstation 4 Pro and Samsung Galaxy. iPhone wasn’t the only wishlist device that Millennials and Gen Z were not on the same page about: Gen Z was also more likely to want a Macbook, Apple Watch, and iPad Pro. (Notice a brand theme here?)

Looking at the top 15 devices on their wishlists, smartphones and gaming consoles are near the top, and you may notice some buzzed about tech that’s not as in-demand. Playstation VR was the only VR set to make the top ranking. Smart speakers/smart home devices were also less likely to make their lists. While 6% of Millennials told us they’d like an Amazon Echo, 5% said they’d like an Apple Home, and 5% a Google Home, we didn’t see enough demand to push these buzzy devices into the most in-demand tech of the season.