Taylor Swift Stirs Up Bad Blood on The Viral List

Taylor Swift sets the internet ablaze by throwing shade at Katy Perry (via Spotify), viral foods are getting a lot brighter (literally), the trending college meme wars stir up controversy, and more viral stories to check out this Friday…

Taylor Swift Stirs Up Bad Blood on the Internet

Taylor Swift set the internet ablaze last night, when she made the unanticipated announcement that her entire music catalog would be coming back to all streaming services (including Spotify) after a three-year hiatus. But it wasn’t her surprising return to streaming that got people talking, it was the timing. Katy Perry, who has recently confirmed she’s in a feud with T.Swift over backup dancers, dropped her new album last night as well, and the internet didn’t miss that detail. Many see the move as Swift throwing shade at Perry. As one Twitter user explained: “Katy Perry stole Taylor Swift’s backup dancers, Taylor Swift stole Katy Perry’s new album celebration, Spotify listens, and fans.” Swift, however, called it a celebration for selling 10 million 1989 albums worldwide in an Instagram post that has over 24,000 likes and 1,000 comments.

Trending Foods Are Getting Brighter (Literally)

Unicorn foods are bright, but not as bright as the latest edible trend: glow-in-the-dark treats. Black Star Pastry in Sydney, Australia has found viral success with donuts—or “glonuts”—that glow under a blacklight. The radiant sweet and sour treat (that also fits into the galaxy-inspired food trend) is now the highlight of the bakery’s Instagram, bringing in hundreds of likes and drawing consumers to their location for an Insta-worthy shot of their own. Disney California Adventure Park is also feeling the glow, with their addition of Infinity-Ade: “a lavender lemonade that comes complete with a color-changing glow cube.” A video of the colorful lit-up beverage from @kthedisneybear has already generated over 4,300 views. (BTW, unicorn food is still going strong, with Unicorn Pizza the latest viral contender.) 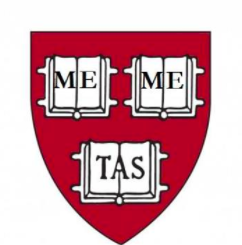 A Harvard College controversy is shining the light on an emerging trend among Ivy League University students: “college meme wars.” The activity is taking place on campuses across the country through Facebook groups with members in the tens of thousands—some with more members than there are actual students. The growing online groups are spaces for students to “poke fun at campus clichés, pop culture and other universities” via memes. But one group started by Harvard College’s incoming freshman class was the center of controversy this week, when it broke off into a smaller group where participants were challenged to post the most offensive memes they could. The memes, which ranged from obscene to racist, were brought to the attention of Harvard, which revoked the admission of 10 incoming students as a result. 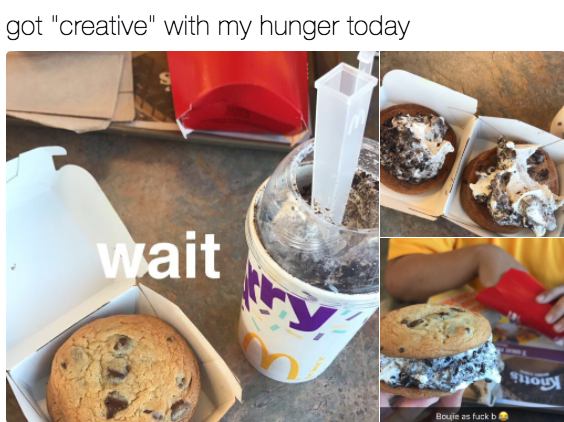 A secret McDonald’s menu item is going viral, but if you want to get your hands on it, you’ll have to do-it-yourself. In a “why have we never thought of this” move, Twitter user @nxthvniel_ posted a picture of a McFlurry sandwiched in between two McDonald’s chocolate chip cookies, stating he “got ‘creative’ with [his] hunger.” The sweet concoction has produced close to 20,000 retweets and 55,000 likes, along with memes that have captions like “I feel like you just discovered fire…” The McDonald’s DIY item is finding the same success as when consumers began swapping out Big Mac patties for McChicken patties. Now, that consumer-created Chicken Big Mac is an official menu item in Australia, so we’ll see if the ice cream sandwich goes from fan favorite to McDonald’s-approved dessert.