How Do Millennials Really Feel About Engagement Rings? 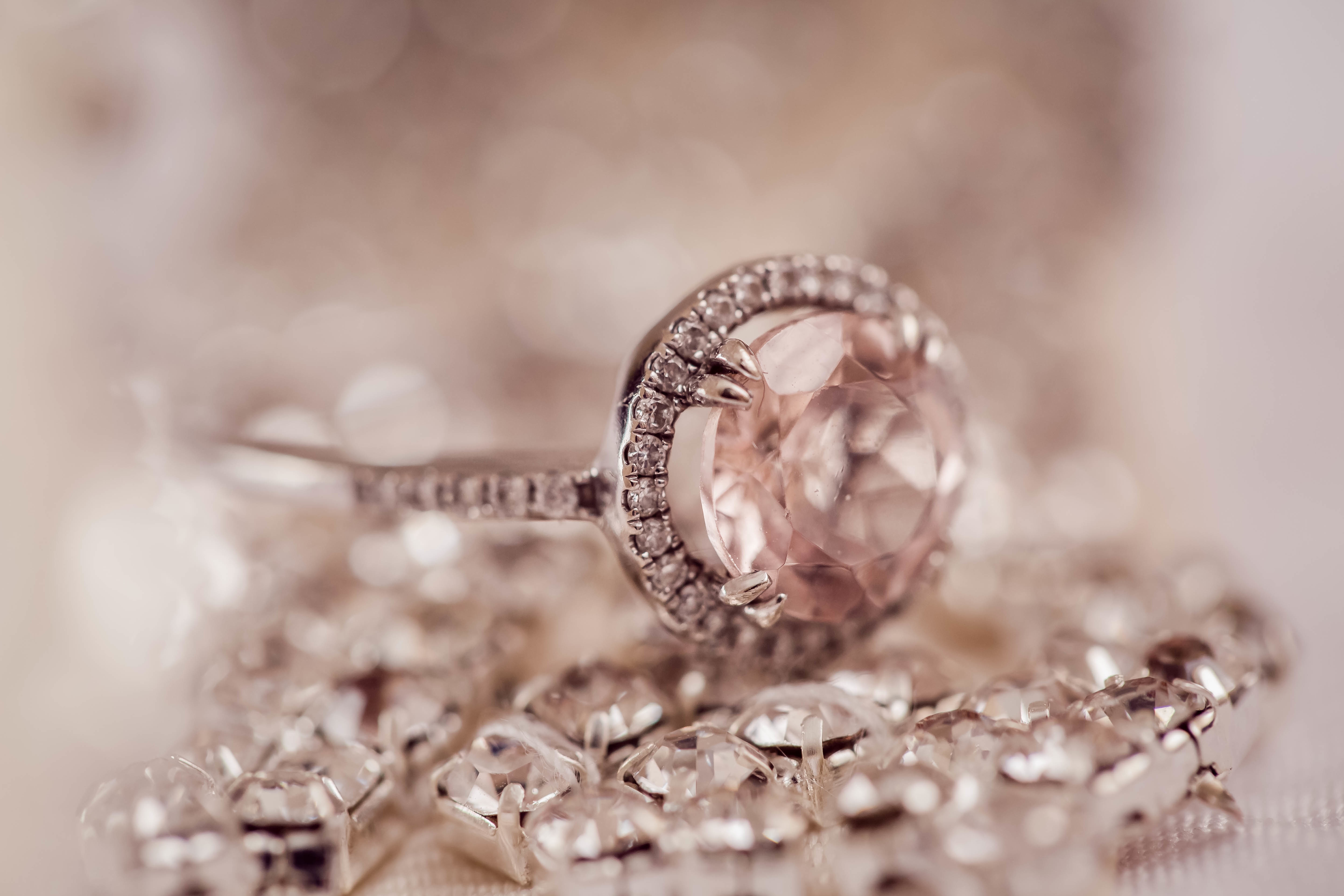 With the peak proposal day of the year approaching, we asked Millennials what they really think about engagement rings—and diamonds—right now…

Did you know we’re in the middle of Engagement Season? According to some reports, 40% of the year’s wedding proposals happen between November and December, and WeddingWire reported last year that the most popular day of the year to get engaged is Christmas Day—Christmas Eve is number three (after Valentine’s Day), and New Year’s Day is number four.

Millennials are the age group responsible for many of these engagements—but of course, the generation’s delay of marriage has reportedly sent the diamond industry scrambling. With over 80% market penetration, diamonds are still “an established product” for those considering marriage—the problem is, only 30% of Millennials are married. Other generational challenges include their shifting definition of luxury and status symbols, and environmental and social concerns. This summer, Millennials were called out as a threat to the diamond industry, and The Economist tweeted their story on the subject with the caption, “Why aren’t millennials buying diamonds?”—causing Twitter to offer their own blunt explanations for why the generation isn’t purchasing the “sparkly status symbols.” In fact, seven of the leading diamond brands have come together for the marketing effort “Real is Rare” to win over the group—their first ad campaign in five years.

But this year we also saw some potentially conflicting information about Millennials and the diamonds traditionally found on those engagement rings. Contradicting the idea that the generation is rejecting diamonds, De Beer’s annual report declared that “Millennials spent nearly $26 billion on diamond jewelry [in 2015]…acquiring more than any other generation,” and accounting for 45% of retail sales in four major markets. At the same time, findings from an MVI Marketing Ltd. survey indicated that for Millennials, lab-created diamonds are as tempting as the real thing. Of 21-35-year-olds who earn at least $75K, about 41% are aware of lab-created diamonds, and over half say they would like to know more about them. In fact, 55% would consider buying an engagement ring with a lab-grown diamond.

In preparation for the upcoming peak proposal days of the year, we dug into how these young consumers are really feeling about engagement rings and their stones in our survey on luxury (full results available to Gold subscribers this month). With the context that an engagement ring is one luxury item that many people buy as a part of a major life milestone, we asked 18-34-year-olds their thoughts on the traditional jewelry and real diamonds. Here’s what we found: 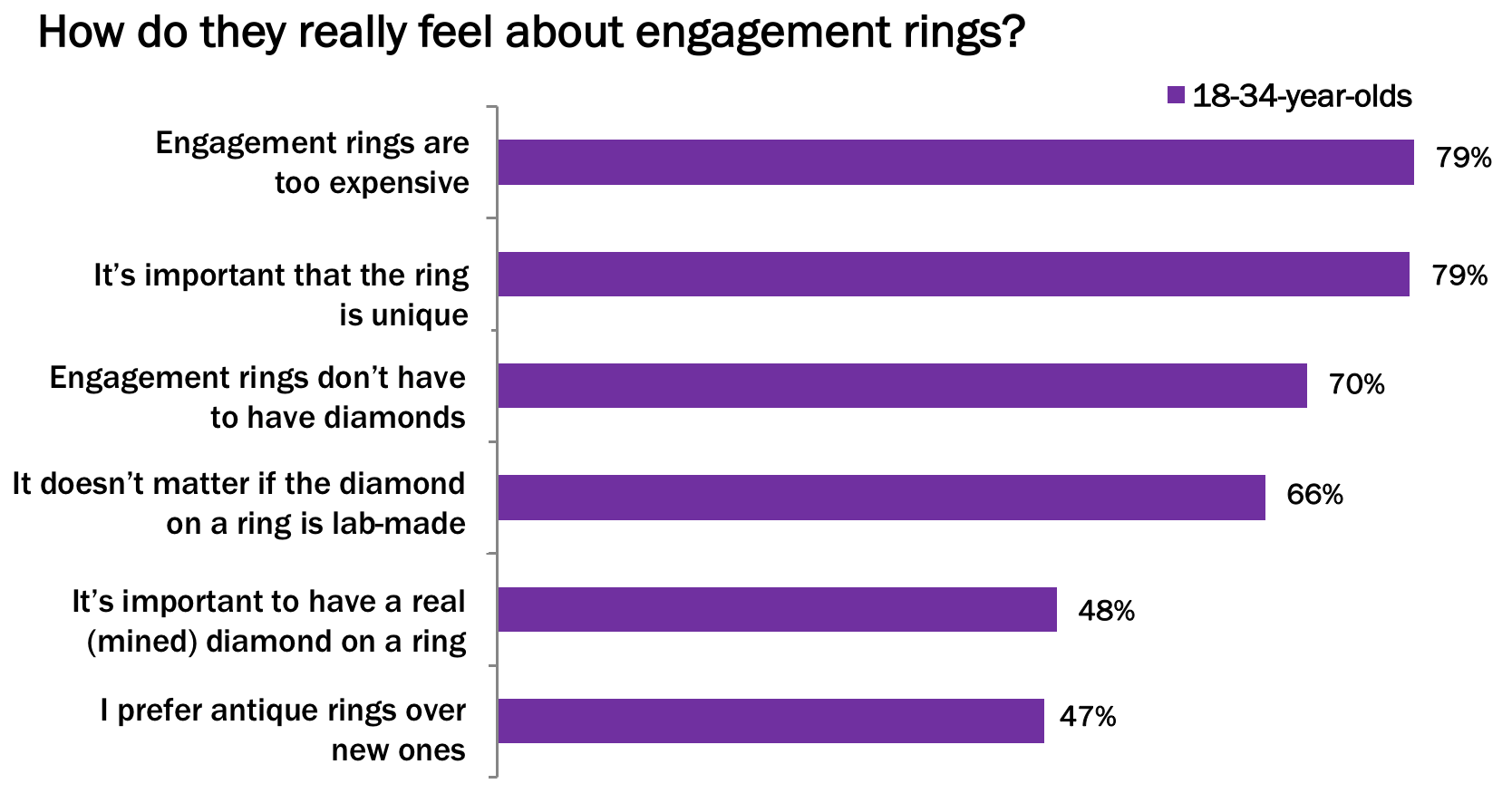 One of the strongest feelings that Millennials have about engagement rings right now is that they’re far too pricey, with almost eight in ten saying that they’re too expensive. Their price sensitivity could be changing the tradition. In our 2016 survey on wedding trends, 24% of 18-33-year-olds said that big expensive engagement rings are totally in style, while 36% said they are totally/somewhat out of style. We first reported on the growing trend of Millennials’ budget-conscious engagement rings back in 2014. At that time, we reported that Fast Company called the traditional three-months’ salary engagement ring “a prehistoric idea“ for Millennials, who put more emphasis on having luxury experiences than owning luxury goods. We also noted that qualitatively, we were seeing more Millennials turning towards vintage rings to cut costs, or embracing understated engagement rings, which trades big bling for creativity and uniqueness.

That uniqueness is clearly prized: almost eight in ten believe that engagement rings should be unique—which could put retailers who specialize in big cookie-cutter solitaires on the outs. Their desire for uniqueness could also be one of the reasons that the majority say that engagement rings don’t have to have diamonds. We’ve seen that as more Millennials get married, they’re putting some new spins on old traditions, and the engagement ring is no exception. While celebrities like Kim K. proudly sport huge diamonds, more couples are opting for designing their own rings, unique colored stones, and other details that make rings feel more one-of-a-kind. Social media and the “ring selfie” could be influencing the trend.

Their openness to lab-made diamonds is also clear here. Almost seven in ten agreed with the statement “It doesn’t matter if the diamond on a ring is lab-made”—more than those who agreed “It’s important to have a real (mined) diamond on a ring.” Interestingly, real versus mined diamonds is one area that age seems to impact: 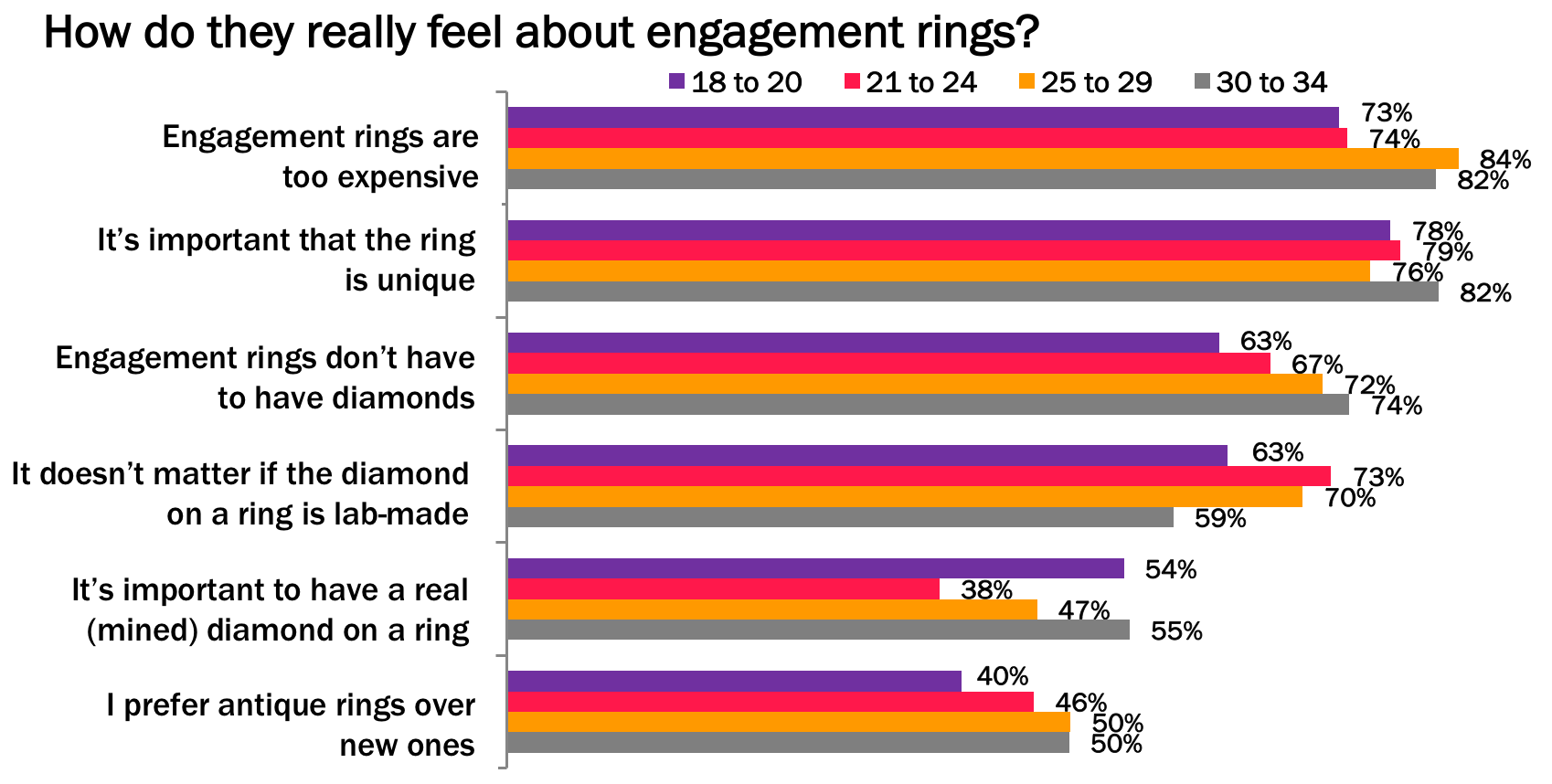 While a little over half of younger (18-20) and older (30-34) Millennials think a real diamond ring is important, 21-24 and 25-29-year-olds were less likely to agree, and more likely to agree with the idea that engagement ring diamonds can be lab-made. Another interesting note is that the desire for a unique ring increases as Millennials age up, perhaps because they’re getting closer to buying or sporting an engagement ring themselves. We should also note that agreement over the statement “I prefer antique rings over new ones” also increases with age, and half of older Millennials currently agree that antique engagement rings are preferable—another big watch-out for the industry.

Not surprisingly, gender also impacts feelings on engagement rings and diamonds, but perhaps not in the ways you might suspect: 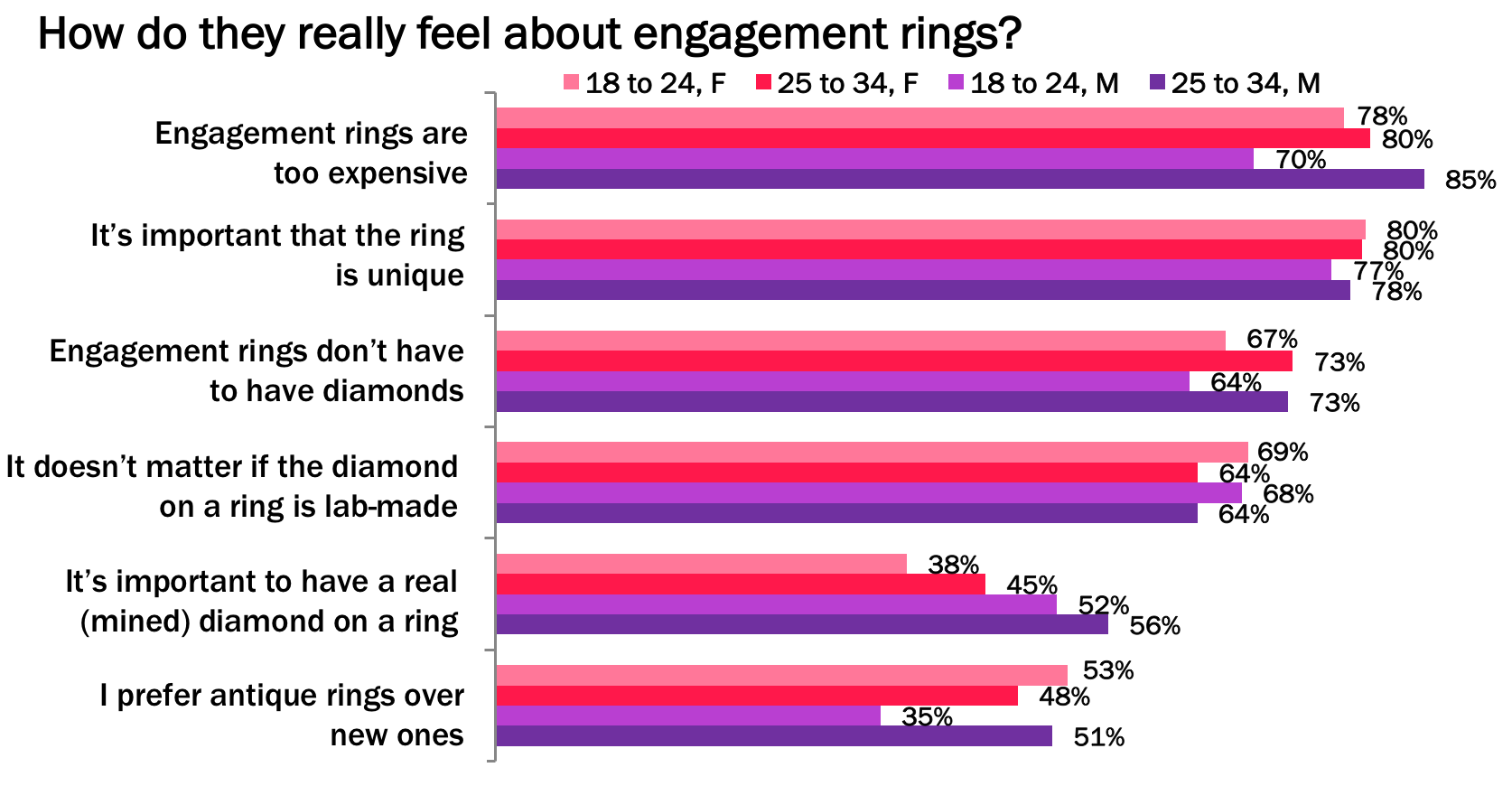 Older Millennial males were the most likely to agree that engagement rings are too expensive, again, potentially because of their closeness to the topic in comparison to other age groups. When looking at differences between males and females, females were less likely than males to agree that it’s important for rings to have a real, mined diamond. Considering the fact that more and more couples are choosing and buying rings together, their feelings on the topic could influence the industry just as much as mens’.