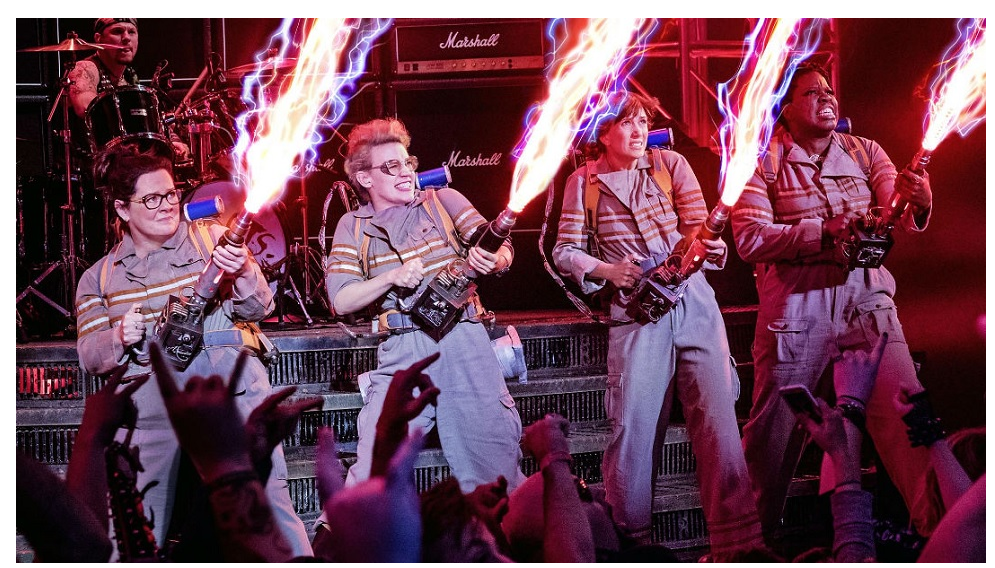 Millennials have developed a rep for not going to the movies—but evidence continues to mount that, surprise, they actually are. Millennials are reportedly in the midst of a movie-attendance resurgence, with National CineMedia reporting that their Millennial movie-goer audience grew 16% in 2015, and is up 8% in 2016 so far. Their data shows that Millennials are 50% more likely to name movies as a passion than the general population, and Ypulse research shows that 40% of 13-33-year-olds say they are die-hard fans of movies, putting it at number two on their list of things they’re big fans of (after TV shows).

We’ve also seen evidence of a resurgance in movie-going among young consumers. Our most recent entertainment tracker also found that 61% of 13-33-year-olds say they spend money on movie tickets monthly—an increase from 50% last year. When going out at night, 57% of 13-33-year-olds and 67% of 13-17-year-olds would prefer to go to the movies, versus 28% who said house party, 27% who said concert, and 24% who said bar. (Restaurants were their top preference at 72%—food trumps all, sorry movies.) Now we’re in the beginning of a busy summer movie season, and studios are undoubtedly counting on young viewers to make their summer releases into major blockbusters. So in our most recent monthly survey, being released next week, we asked 1000 13-33-year-olds which of the movies being released in June, July, and August they’re planning to see in theaters to get a hint of what those hits will be. (Note: This survey was fielded June 29th, 2016 – July 11th, 2016, so some movies have been released since data was collected.)

Because we still see major gender differences in young consumers’ entertainment interests, we’ll take a first look at the results by looking at the top 15 movies Millennials and teens plan to see in theatres, males versus females: 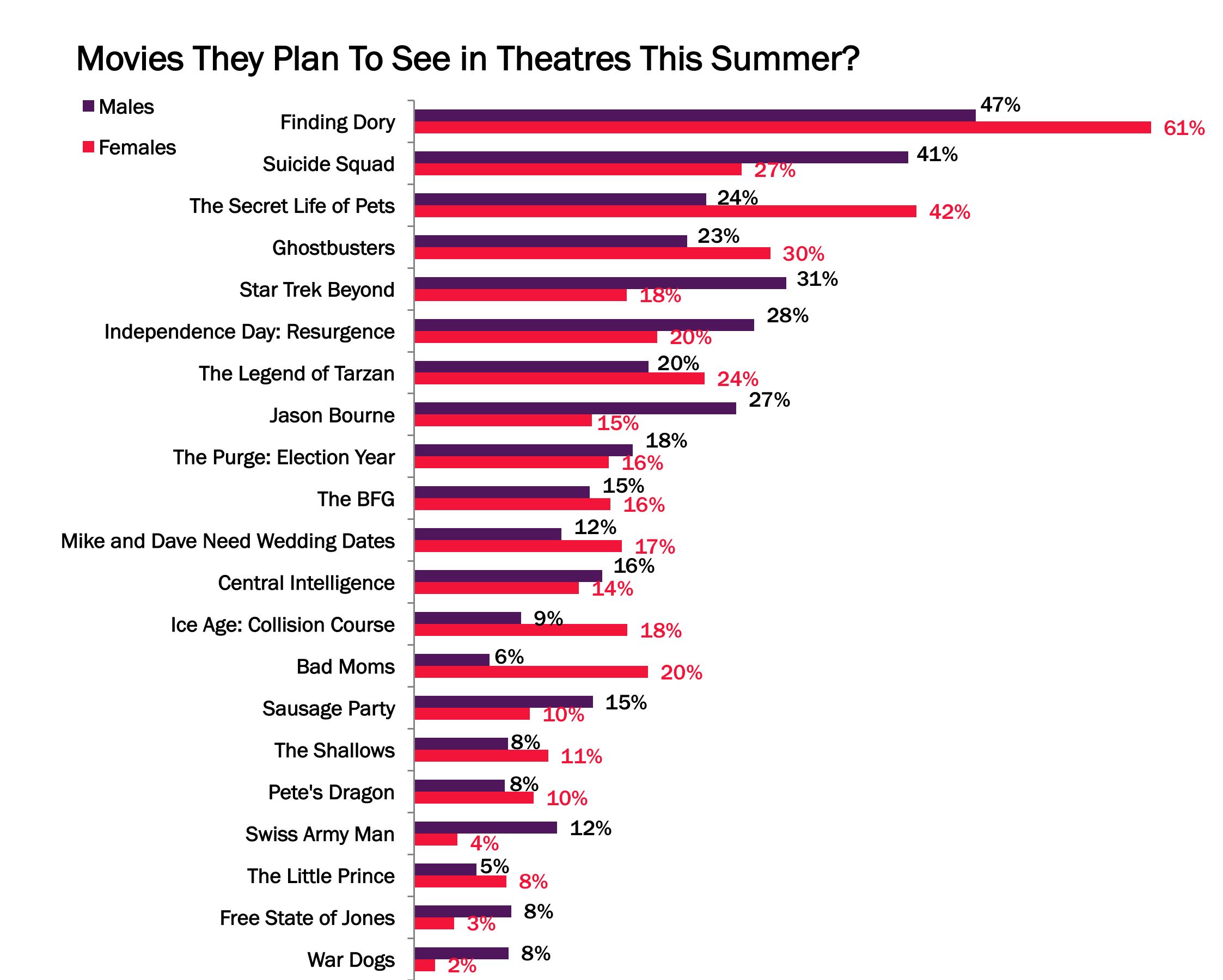 Finding Dory was the top movie Millennials and teens overall said they planned to go see in theaters, and females fueled this interest, with 61% planning to see the animated Pixar sequel. Their enthusiasm helped Dory find a $135 million opening, which was taken as further evidence that Millennials are still going to the movies. Disney has credited the successful box office sales to “Generation Nemo,” the viewers who grew up watching Finding Nemo and couldn’t wait to see the sequel.

But of course, age differences also impact entertainment preferences. So here are the top movies that Millennials plan to see in theaters this summer, teens versus older Millennials: 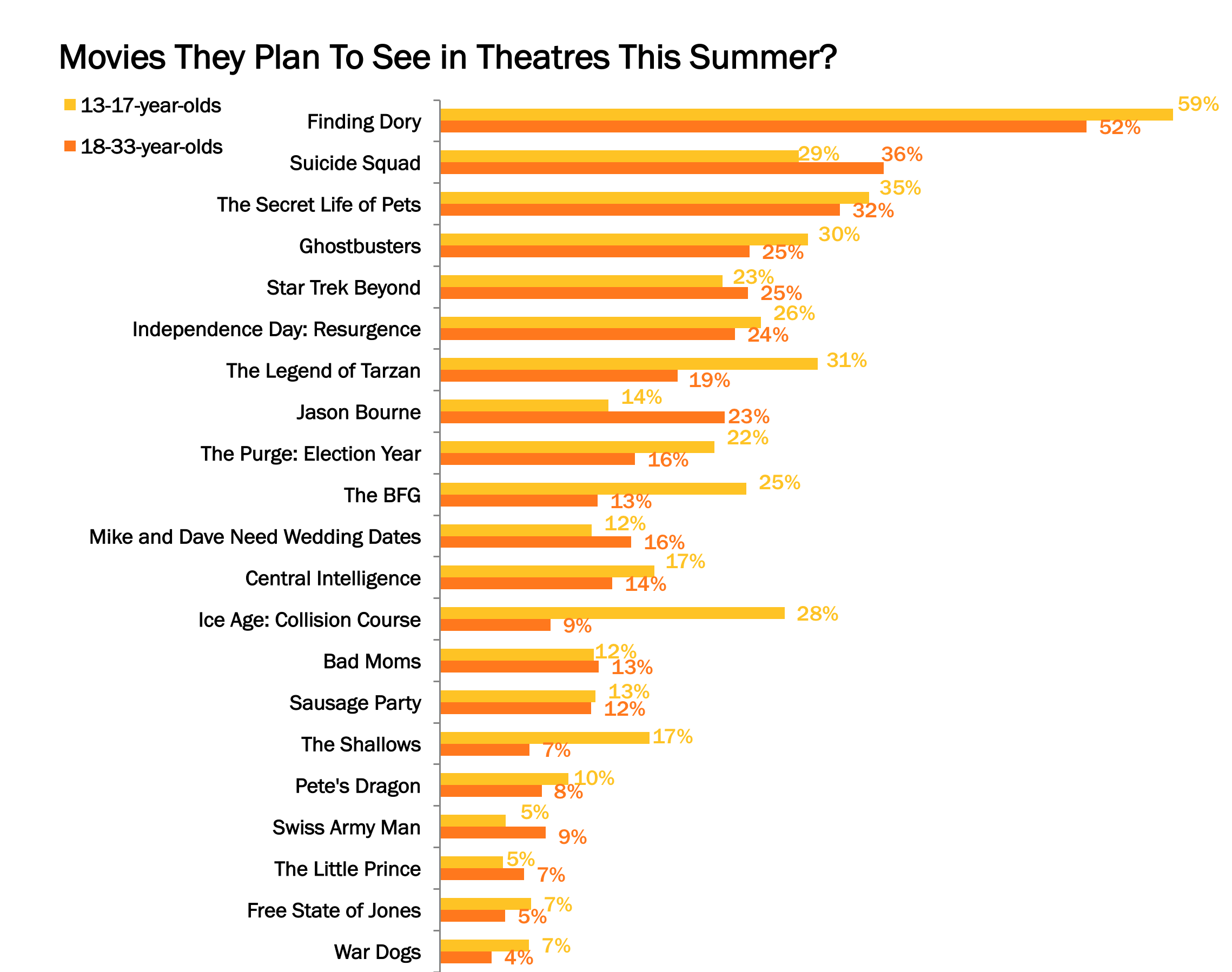 Interest in Finding Dory was not necessarily driven by a young audience. We see here that only 7% divides the number of teens who plan/planned to see the movie in theatres from older Millennials. Opening weekend statistics for the film align with this: While the under 18 audience decreased from 51% to 38% between the two movies, the 18-24-year-old audience doubled from 9% to 18%. Ah, Millennial nostalgia. But younger viewers are more interested in animation and children’s book-driven content overall, with more saying they plan to see The Legend of Tarzan, The BFG, and Ice Age: Collision Course than older Millennials.

Now what about the movies they’re most excited about? We also asked 13-33-year-old respondents what movie they’re MOST excited to see in theaters this summer. Here’s the top five winners across groups: 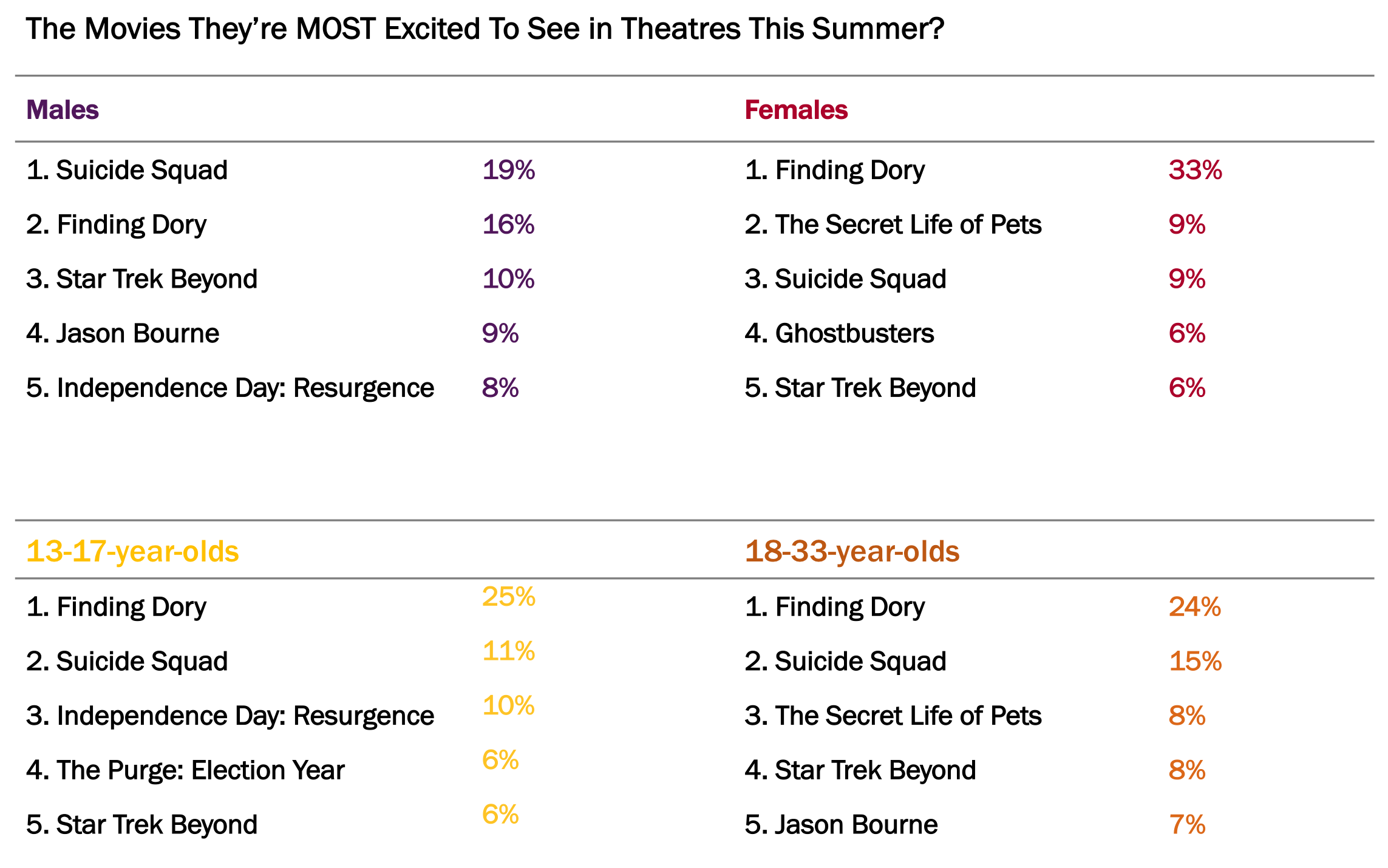