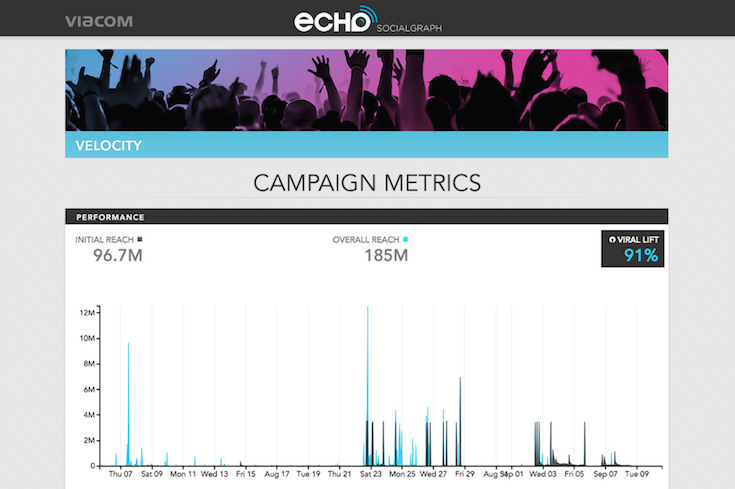 Platforms like Twitter are providing brands with more consumer feedback than they have ever had before—but harnessing the power of that feedback is still difficult. For one thing, the messages are messy, on multiple platforms, using language that brands can’t always easily understand—hashtags, slang, sarcasm, and quips, just to name a few.

This month, Viacom Velocity is unveiling a tool to turn all the social media noise into social campaign feedback. The marketing group has partnered with technology platform Canvs to update their Echo Social Graph, a social media analytics dashboard. The result, Echo 2.0, can map 56 emotional categories, using a database of “millions of pop culture words and phrases” to interpret Millennials slang. We talked to Lydia Daly, Viacom Velocity’s VP, about how the Echo Social Graph is helping them understand young consumers, and track marketing feedback across the internet.

Lydia Daly: Viacom Velocity is the integrated marketing department of Viacom, and Echo is something that we launched almost two years ago. It’s our way of describing campaigns that we do for our partners that are social by design, that have a really deep footing in the social media space. We think about how we can make social media a key component, and how can we make sure we’re leveraging all the channels that are available to us.

If you’re going to do campaigns that are social by design, you need to make sure that you’re measuring them correctly. Prior to the Echo Social Graph, the way that we were measuring things was a lot of manual tracking. A lot of excel spreadsheets, a lot of checking our own channels. Looking at MTV’s Facebook page, posts there, how many question we were getting, how many comments. When you do that kind of manual counting, you miss the bigger picture. You miss that broad social conversation, and particularly the organic piece: how is the audience reacting, and creating content on their own accord in response to the campaign. So we created the Echo Social Graph. It is a social media analytics dashboard, proprietary to us; created in collaboration with a team called Spredfast. It covers five difference social channels: Facebook, Twitter, YouTube, Tumblr, and Instagram. It will give you those broad metrics like reach and engagement, but it also goes a little bit deeper into content, showing which pieces of content are resonating the most, which influencers are getting involved in the campaign, what are the demographics of the audience that got involved, that type of thing.

YP: Why do you think it’s important for brands to engage in social media-focused campaigns?

LD: We can’t argue with the fact that eyeballs are moving away from more traditional media. There’s less appointment-viewing happening than we would probably like. Particularly when it comes to Millennials—they’re spending all of their time on social media. So if we want to attract them, and we want to target them, we should be trying to create entertaining, appealing content, in the spaces that they are. Social media is that space. Another reason it’s important for brands is because you can never be far enough ahead of social media. It’s always changing, there’s always new platforms, new developments on those platforms, and so on.

YP: What are the benefits to listening to social media conversations and having access to the emotion graph that Echo is providing?

LD: The benefit is it’s giving us insight beyond just impressions. Headline data for social media analytics has always been, “what’s the impression number, and what is the engagement number?” Those are important numbers, don’t get me wrong, and we do report on them. But really that’s just the number of times that somebody has seen something. It’s not really telling you, did they like it or didn’t they like it? How did it make them feel? Did they like the beginning more than the end? Did they like the Instagram as opposed to the YouTube video? Is there a particular tone of voice that resonated more with our audience? I think the Echo Social Graph gives you the type of information that allows you to delve deeper. So the next time you do a campaign, you’re able to optimize on what you did before, and even more than that, in real time when the campaign is live and you’re halfway through, it tells you how can you optimize, what can you change, what’s not working, etc.

YP: When we talk about social media marketing to brands, the question we often hear is “Ok, great, but how do you measure the ROI?” Do you feel that social media emotion could be a part of a new ROI?

LD: Possibly. I still think there will be traditional brands who will only think of ROI as, “did this translate to sales, and did someone buy my product.” That’s always going to be really difficult when it comes to social media, to provide that direct correlation. Social media in general, even though it is in the digital space, is more about what we would consider awareness and brand affinity, than it is about directly promoting a call to action that we can attribute to something.

YP: Do you feel as we embark on more social media campaigns, and more brands are trying to reach young consumers in these spaces, that traditional ROI is dead?

LD: No, I don’t. I just think there is a place for all different types of marketing. Social media is a part of that. There has to be different types of marketing that’s more directly related to ROI, because otherwise I don’t think brands would know what they’re doing. But I think they should be considering the social media space as something different. It’s about if the audience feels better about your brand. If you are you creating content that resonates with them, then they feel more positively about you, and hopefully that is going to relate to sales and whatever that ROI is for you. 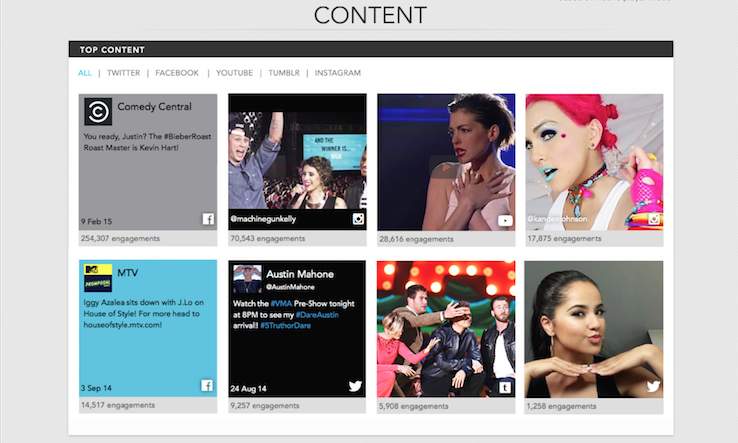 YP: Thinking about entertainment brands, we’ve seen ratings struggling to keep up with the way that Millennials consume media. The current system is a few steps behind their habits. Would you say that emotion scales and something like Echo should be considered by entertainment brands when they’re figuring out their ratings in the new on-demand viewing era?

LD: I do think that they’re going to have to broaden the way they look at how they measure things. It’s a very nuanced world, and Millennials particularly are not acting in the traditional way that we would love them to. Because it would be much easier for us all. I think emotions play a big part of that. So rather than just knowing that they saw something, knowing how they felt about it at that particular time, and what emotions it inspired in them and therefore what emotions they shared with their own audience and all the people that they’re friends with. It’s very important.

YP: Can you share any examples of how the Echo Social Graph has been used?

LD: We tested Echo 2.0 during the VMAs. In the lead up to the VMAs we had various partners who were doing integrated marketing campaigns, so we ran Canvs analysis over their Echo Social Graph for all of those campaigns. That told us a lot of things. It showed us how the emotions changed and varied in the lead up to the VMAs, to the red carpet, to the night of. It was able to tell us things like, who used social influencers as part of the campaign, which ones resonated, which resonated less. For performances that brands had sponsored, which artists were liked more than others, was the brand that we were partnering with mentioned in the context of the conversation, did somebody not liking the artist that we use give negative emotion to that brand, was the affinity of the brand impacted. We were measuring all those types of things across all of the different brands.

YP: Do you feel like brands today struggle to understand Millennials and young consumers?

LD: Yes—how could an older brand manager at a very traditional company understand somebody using slang words in a tweet? Is it a positive thing, is it a negative thing, how do they feel about the brand? I think they struggle. It’s not just understanding them when they do speak, it’s even being able to understand how to target them or reach them at all, because they are spending more time on social media, you’re not really sure what they’re watching because they’re watching it in their own time, their own schedules. So it’s definitely getting harder.

YP: The Echo Social Graph can interpret words and phrases…like “guilty pleasure” that kind of stuff. How often is Canvs updating their database to keep up with Millennial slang?

LD: They are updating it pretty much every day. They’re keeping an eye on new things that come in. It’s a mixture of machine learning, but also human. You can’t do this without using actual people to help you understand. The machine can’t understand sarcasm. So they’re continually deciphering things, and if they come across something that isn’t currently understood by the system, they’re using a person to help the system understand it. So it’s definitely something they’re continually staying on top of.

YP: Do you feel like brands need to take bigger risks on social media campaigns?

YP: So you should probably understand what Millennials are saying, but you shouldn’t be mimicking that language.

LD: I don’t think you have to be risky, but I think you have to be entertaining. You have to have a sense of humor. The way I always describe it is, you need to think of yourself as a person, and you need to have an emotional intelligence hat a person would have. You know how to respond to something that someone is saying to you, and what the body language should be, and the tone that you use. It’s the same way on social media. You should be speaking as a person who has emotional intelligence.

YP: Is there anything else our readers should know about Echo 2.0 and the work that you’re doing?

LD: We are continually evolving our Echo Social Graph, and Echo. Even though right now we have these particular social channels included, that will change. We’ll add more, we’ll change how we’re measuring things, we’ll spot something that we weren’t aware of before. So it’s going to keep changing. 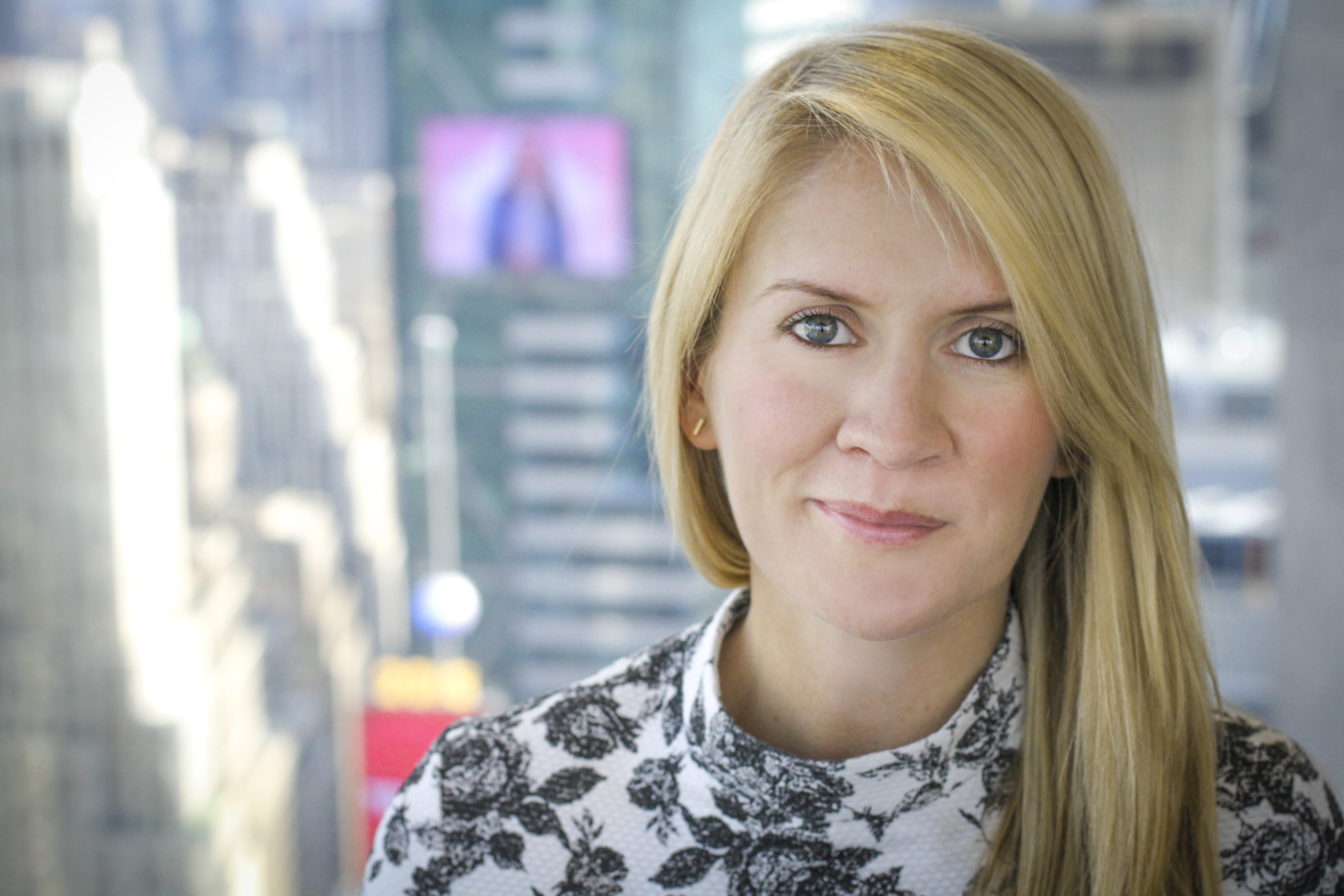 Lydia Daly is the Vice President of Social Media Activations and Earned Media for Viacom Velocity, a full service integrated marketing and creative content solutions division. She is the social media strategic lead for all integrated marketing executions across MTV, Comedy Central, VH1, Spike, LOGO and more. Daly oversees Velocity’s Echo offering and the ideation, innovation, implementation and measurement of all client specific social media programs. She reports to the Executive Vice President of Integrated Marketing at Velocity, Dario Spina.