Ho, ho, oh noooo. Holiday marketing is in swing, and we’ve already witnessed more than one brand display some pretty serious PR fails this season, giving us plenty to learn from.

‘Tis the season…for holiday PR fails. The marketing hype around the final months of the year are a double-edged sword: while some ads become a tradition, looked forward to by consumers, the increased attention also means that missteps stick out like sore thumbs.

Interestingly, one of the biggest backlashes against holiday marketing so far this year has actually been a PR win. Starbucks’ now infamous #RedCups might have infuriated a niche group, but the buzz around the “anti-Christmas” design was more than likely a boon for the brand, who also encouraged a huge amount of young consumers showing their love for the cups on social. But not all brands have been as lucky with their holiday marketing scandals. 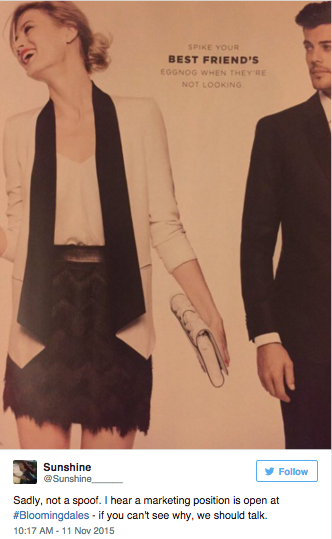 Bloomingdale’s came under fire last week for an ad in their holiday catalog that included the copy, “Spike Your Best Friend’s Eggnog When They’re Not Looking.” Oh, Bloomingdale’s, what happened here? Not only did the copy remind readers of a date rape scenario, the imagery included was a male model looking sideways, unsmiling at an aware, laughing female model. Oops. The internet responded with outrage, calling the brand out for its “creepy” and “inappropriate” ad.

Lesson learned: We can’t believe we have to say this, but anything that hints at such a serious issue should never make it into a campaign, as Budweiser showed earlier this year. When it comes to representations of gender and/or flirtation, proceed with caution—if there is even a chance that your copy could be interpreted as an encouragement of sexual assault, shut it down.

Bloomingdale’s did listen and react, issuing this apology on Twitter: “We heard your feedback about our catalog copy, which was inappropriate and in poor taste. Bloomingdale’s sincerely apologizes.” However, that apology wasn’t enough for many observers, who wondered why a bigger gesture wasn’t made, and suggested that the retailer donate to an organization that helps sexual assault victims.

Lesson learned: Young consumers are used to hearing brands say “sorry,” they now expect real action to be made if you want them to take your regret sincerely. 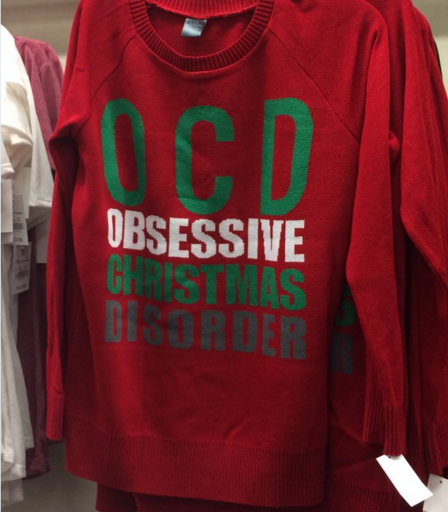 While Bloomingdale’s has been mopping up their spiked eggnog mess, other retailers have been facing public criticism for holiday products that are being called insensitive. A holiday sweater from Target began to appear on Twitter in early November, but not because shoppers loved it. The sweater reads “O.C.D. Obsessive Christmas Disorder,” and many—some who suffer from O.C.D themselves—have accused the brand of making a joke out of a serious disorder. The brand’s Facebook was quickly filled with messages about the offending item. Target has apologized, but does not plan to pull the item out of stores. Unlike Nordstrom, which has already yanked their own holiday sweater blunder—a Hannukah apparel item that read “Hanukkah J.A.P.” (Jewish American Princess). 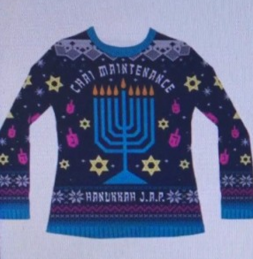 Lesson learned: Some may look at these sweaters and think, “what’s the big deal?” But the time for thinking everyone is just too sensitive has passed. Millennials grew up during first wave PC culture, and according to Neil Howe their love of the politically correct is “a symptom of the much bigger movement underway to push the culture at large in a kinder, gentler direction.” At the same time, thanks to the internet, what once might have upset a small group of shoppers can now turn into a mass backlash. What might be tongue-in-cheek or light-hearted in intent can be interpretted much differently, and it’s often the offended who control the story in the end. Put all products and messaging through a simple test: will this hurt anyone’s feelings? If the answer is yes, it might be better to leave it off the shelf…or risk being in that warm holiday spotlight for the wrong reasons.