Millennials & Teens Sound Off: Their Favorite Places to Shop, Online & Off

Young consumers are influencing the future of retail, so we asked 1000 13-33-year-olds where they most like to shop online, and in a physical store to find out who’s appealing to them right now.

Young shoppers are shifting the future of retail. Teens’ online shopping really might be having an impact on brick-and-mortar retailers. Because 18-34-year-olds spend more money online than any other age group, their behavior has a big influence on the online shopping space. The headlines about Millennials and teens’ behavior influencing and disrupting the retail space seem to be endless. Our March survey looked at how their digital spending is changing up IRL shopping time, and our most recent August survey of 13-33-year-olds (available to Gold subscribers today) did a deep dive into their online shopping behavior versus their offline shopping. We asked 1000 Millennials and teens to tell us their favorite places to shop online and offline to find out who’s appealing to their sensibilities right now.

These were open-end response questions to allow us to capture the full range of sites and stores they love. As with any qualitative question, it’s important to keep in mind that the responses will include those that are top of mind, those that are used most often, and those that are actually viewed in a positive light. But there are absolutely lessons to be learned from their top answers.

Because their online shopping is proving such a threat to brick-and-mortar, we’ll start with the top sites to spend on, asked of those who say they shop online. Here are the top ten responses to the question. “Regardless of category, what is your favorite place to shop online and why?”

No, you don’t need your eyes checked.

Amazon was the site named by the overwhelming majority of respondents. In fact, if we quantify the list, over six out of ten respondents named Amazon as their favorite place to shop online. Prices and the massive variety of products available are the biggest draws for them. A 28-year-old female said simply, “They have everything!” One 18-year-old male explained his choice by saying, “They almost have anything you can think of and they have stuff they wouldn’t have in stores.” According to the latest rankings for Customer Service Champions, Amazon is winning the battle for Millennials. The group reports that Amazon has “a recipe for loyalty” among younger consumers that “few retailers have been able to successfully copy,” and almost two out of five Amazon Prime members are under the age of 35.

Amazon Prime was absolutely one of the reasons that the site was mentioned so often: 13% of those who said Amazon was their favorite place to shop online mentioned Amazon Prime as a reason they love the site, and others mentioned the fast shipping. One 26-year-old female told us, “We have a Prime membership and love the ease of skipping the run to the store and still getting it within 2 days,” and a 15-year-old male said he named the site, “Because I have an Amazon prime account and Amazon has same day shipping.” For better or for worse, Millennials are getting comfortable with instant gratification, and their desire for convenience and “one click mentality” is reshaping the retail world.

We’ve told you that Millennials and teens’ online shopping is rivaling their IRL shopping, and it’s been forecasted that Amazon will dethrone Macy’s as the top American clothing retailer by 2017. The prediction comes after Amazon’s apparel purchases outpaced both Target and Walmart for six quarters. Amazon also ranked at the top of Ypulse’s list of stores that 13-32-year-olds have shopped at, so we can’t say we’re too surprised that the online giant dominated the favorite e-retailer list here as well.

But of course we’re not going to leave you in the dark about the rest of their favorite online shopping destinations. Here are is the list with Amazon removed to give you a more clear look: 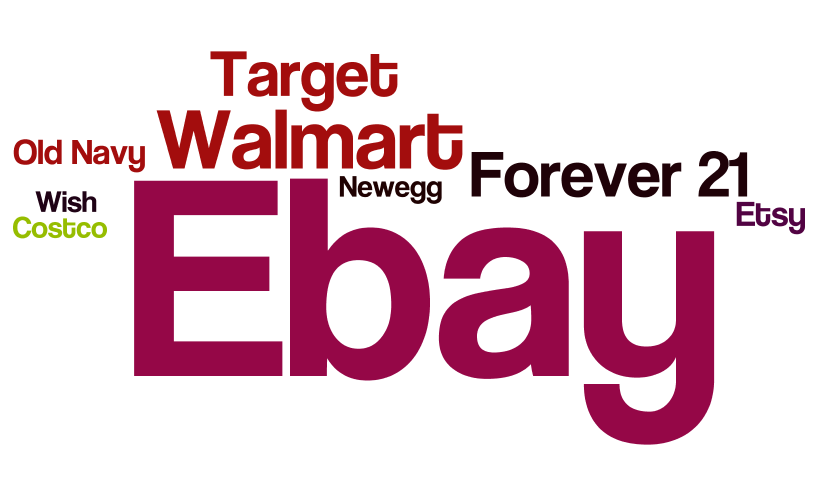 Walmart was ranked number three on the list, which reflects some of the retail news we’ve heard lately. Just last month, a report that Walmart “indexes higher” amongst Millennials than with their parents caused some surprise, but another report was released claiming that though Millennials might shop at Walmart, they don’t LOVE Walmart. The retailer’s score in a metric of customer loyalty and satisfaction among younger shoppers is actually below average, and competitor Target outpaced them in 24 out of 25 scored categories. Amazon’s overall score was over 40% higher than Walmart’s. We did see a bit of this reflected in their answers: a 33-year-old female told us. “Low prices, plus free shipping. Hate online interface though.”

Prices and low-cost or fast shipping were reasons mentioned for nearly all of their top ten online retailer picks. So did the same qualities determine their favorite places to shop in-store? Let’s take a look at the top ten responses to the question, “What is your favorite place to shop when you want to shop in a physical store and why?” 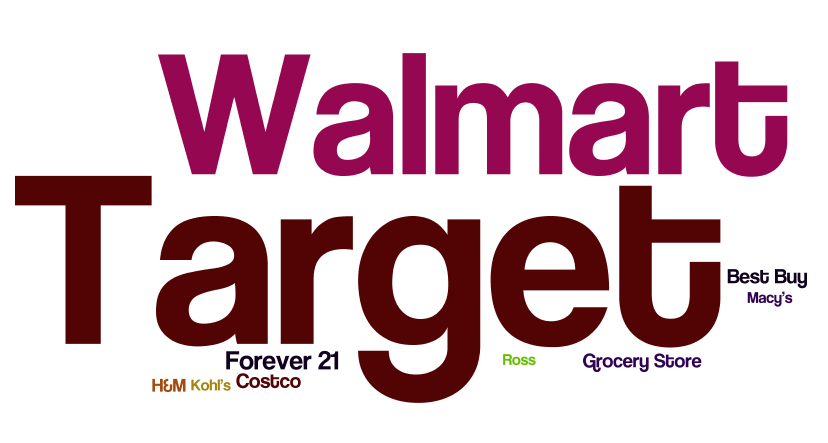 Target and Walmart were the top two physical stores mentioned by a landslide—though they do not dominate the brick-and-mortar list the way that Amazon dominated the online list.

Nearly a quarter of the respondents named Target as their favorite physical store to shop in, and many mentioned the convenience of one-stop-shopping and love of Target style as reasons why.  A 15-year-old female said, “I like a lot of stores that just sell clothing, but target is probably my favorite store because they sell pretty much everything-you could get a whole day’s worth of running errands done with just one trip to target! And it is pretty affordable.” A 21-year-old female compared the super-store to its rival Walmart, telling us, “It’s trendy. Unlike Walmart, it is a little bit more upscale in my eyes. You can buy groceries and cute clothing.”

But that being said, Walmart was a fairly close second place. Prices, wide selection, and convenience were again the most mentioned reasons why they named the chain. A 22-year-old female college student bluntly told us, “It’s cheap and I’m broke.” However we did again see that “they shop there, but don’t love shopping there” hypothesis pop up. One 20-year-old male told us, “I only like shopping there when I’m trying to save some money. I don’t really like shopping there, but it’s where I go most frequently.”

The rest of their top ten list is made up of a mix of affordable fashion retailers, including their fast-fashion favorites H&M and Forever 21 and retailers that feed some of their biggest passions: tech and food.

North America
2 Charts Show What Drives Young People’s Restaurant Choices
Price is always a top factor, but the restaurants they frequent really have food th...
North America
3 New Apps Taking Off Because of TikTok
It’s almost impossible to compete with TikTok, but some new apps succeed because of...
Western Europe
What Young Europeans Want to See From Brands on Social, In 2 Charts
Brands wanting to connect with young people in Western Europe need to know what the...