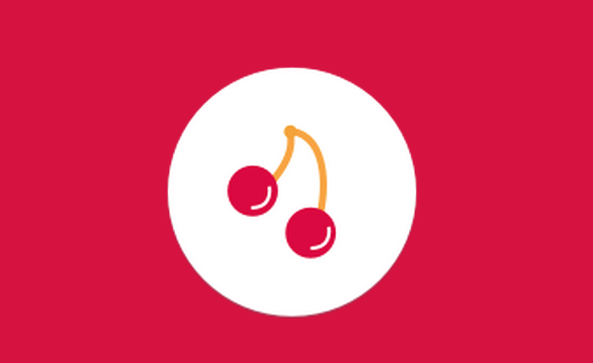 From sexting to the Teen Mom effect, being a teen today is not the same as when you were growing up. Now, talking about the birds & the bees is evolving to keep up with them…and maybe make “the talk” less awkward.

From generation to generation, talking about sex with teens has always been awkward. But being a teen today is not the same as it was when you were growing up, and with more contradictory information, more media, and more technology available to young people, sex ed might be more essential than ever. But those same factors are also revolutionizing “the talk” for some of this generation.

Most Millennials had some exposure to sex ed in middle or high school, but unfortunately they don’t think it helped them much. Though three out of four 18-34-year-olds favor teaching sex education in public schools, 37% said their own education was “not helpful” in navigating decisions about sex and relationships. Advocates are emphasizing expanding teachings beyond STDs and birth control to incorporate understanding the difference between healthy and unhealthy relationships, having a positive body image, making thought out decisions, and navigating the health care system.

Parents’ hesitation to talk about sex, and teens’ fear of parental judgment, could have serious consequences. 68% of teens agree the primary reason they don’t use birth control or protection is that they’re afraid their parents will find out, according to the National Campaign to Prevent Teen and Unplanned Pregnancy. The program reports their research consistently shows parents are the biggest influence on teens’ decisions about sex, not peers or pop culture.

The good news is the number of babies born to teens annually fell by 38.4% between 2007 and 2013. But while these numbers are obviously celebrated, the reasons for the drop remain a mystery. It is possible that a “perfect storm” of cultural, educational, and economical factors is responsible. Researchers point to high unemployment creating a climate that breeds more cautious behavior in teens, innovative sex-ed programs, and TV shows like Teen Mom as possible factors. The release of the iPhone may even receive some credit by making information on the internet more accessible. There is certainly evidence that efforts to modernize, “the talk” are being made. Here are three examples: 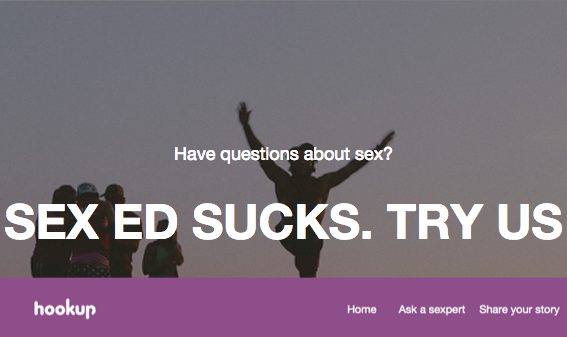 When you hear about an app called Hookup, your first thought probably isn’t sex ed. But Hookup is all about teaching young people about sex in honest, open, and even fun ways. The startup was created by 23-year-old Brianna Rader, who was officially condemned by Tennessee’s House of Representatives after creating a series of sex ed events at her university. In the wake of that upset, Rader wanted to create a place where teens could access information on things that are hard to talk about, like finding birth control and sexual assault. The beta app’s tagline is “Sex Ed Sucks. Try Us.” Users can currently “Ask a Sexpert,” by submitting their own anonymous questions and receive answers in real time, and share their own sexual experience stories—again anonymously. That anonymity is meant to foster openness and honesty. A quote from one 15-year-old on the site spells out the appeal: “It’s cool to be anonymous. To be honest, I’d rather it be a young person or relatable person instead of a teacher or doctor.” 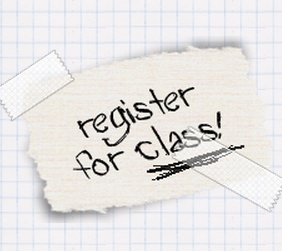 The birds and the bees conversation is, more often than not, awkward for both parents and kids. But new workshops are trying to make “the talk” more fun, candid, and informative. Great Conversations hosts honest, entertaining, and engaging sex-ed classes that speak to two generations at once to make the topic more approachable for families. One of their main goals is to “promote communication with preteens, teens and within families.” The course “For Girls Only” brought in 14,000 attendees last year, and opens the floor to any and all questions girls might have about sex and bodies. Boys are offered a different class, which begins with boys and their dads singing “The Penis Opera” as an icebreaker. 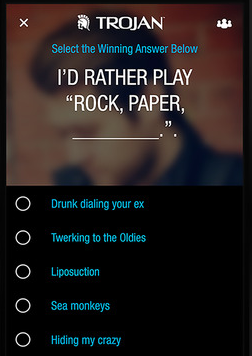 Trojan’s new, free Show Me Yours app wants to make sex talks a lot more fun, and keep educating young consumers after their teen years are over. The app is inspired by Cards Against Humanity, and lets users over 17-years-old fill in the blanks of phrases with a variety of humorous choices. The game can be played against friends, unlocks content the more it’s used, and winners can win up to a year supply of Trojan condoms. Show Me Yours also contains sex-ed resources, stats, tips on how to use the brand’s products, coupons, and an in-app store, which could be nice for those who avoid buying protection in person.