Social Media Tracked Trends: The Stats On Who’s Using What 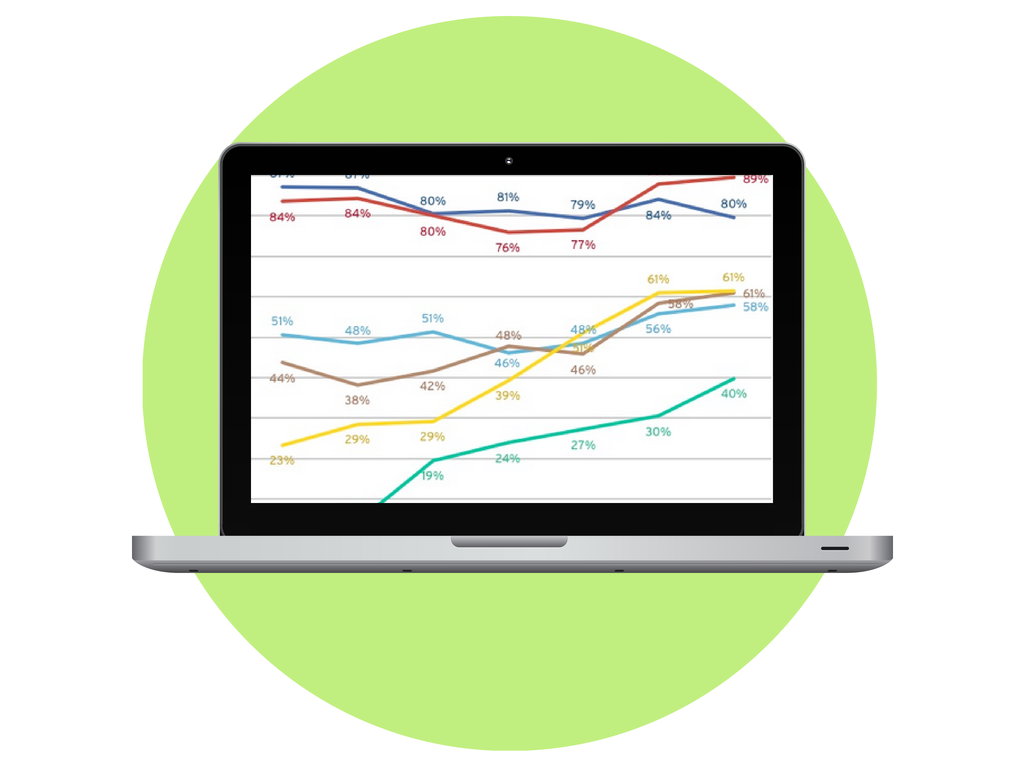 We’ve seen rumors about teens abandoning Facebook, and social media upstarts dominating more established platforms. Figuring out just what to believe when it comes to young consumers and social media use isn’t easy- that’s why we ask them to tell us what they’re doing and track social media trends throughout the year. Today we’re spotlighting those tracked stats to share our insights.

Thanks to Ypulse’s bi-weekly survey of 1000 14-32-year-old Millennials nationwide, we are able to track data on the generation over time. The speed at which the social media landscape changes (especially over the last two years) has made keeping tabs on what platforms they’re using, and what’s growing in popularity, more important than ever. Today’s social media upstart is tomorrow’s go-to communication center for a generation that is used to quickly adopting and discarding media. Each quarter, we ask these young consumers which social media networks they use, adding new networks as we see them rise in popularity. Here is a tracked trend snapshot of social media use amoung 14-32-year-olds from January 2013 to today: 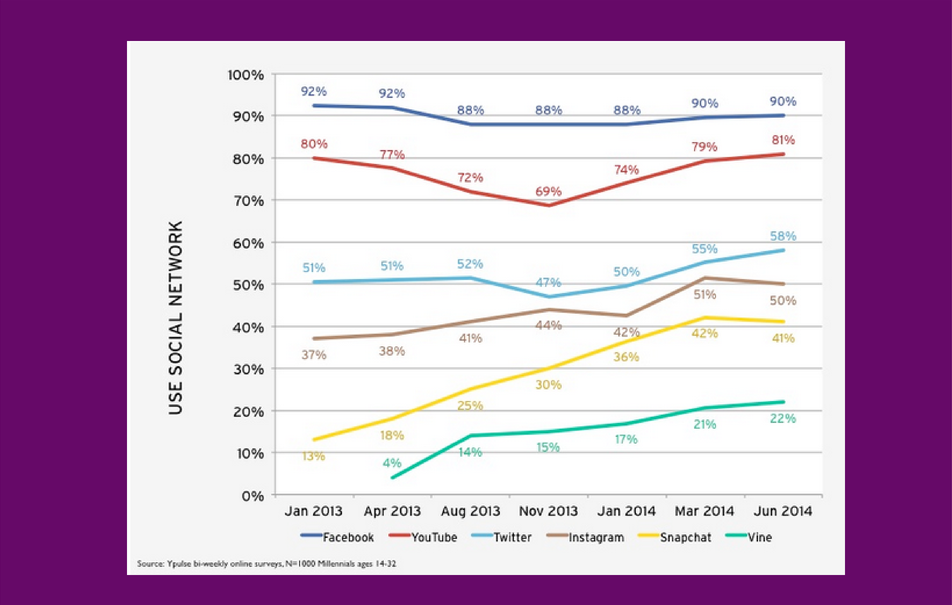 Despite the widespread near-panic that young consumers were abandoning Facebook, we’ve seen the network dip slightly in popularity, but overall maintain its position as the number one network that they say they use—by far. Even when looking at only 14-17-year-olds, which we break out in our age-specific charts, Facebook remains the dominant social platform, though YouTube has this year become the number one platform teens use, with 89% telling us they use the video site compared to 80% who say they use Facebook: 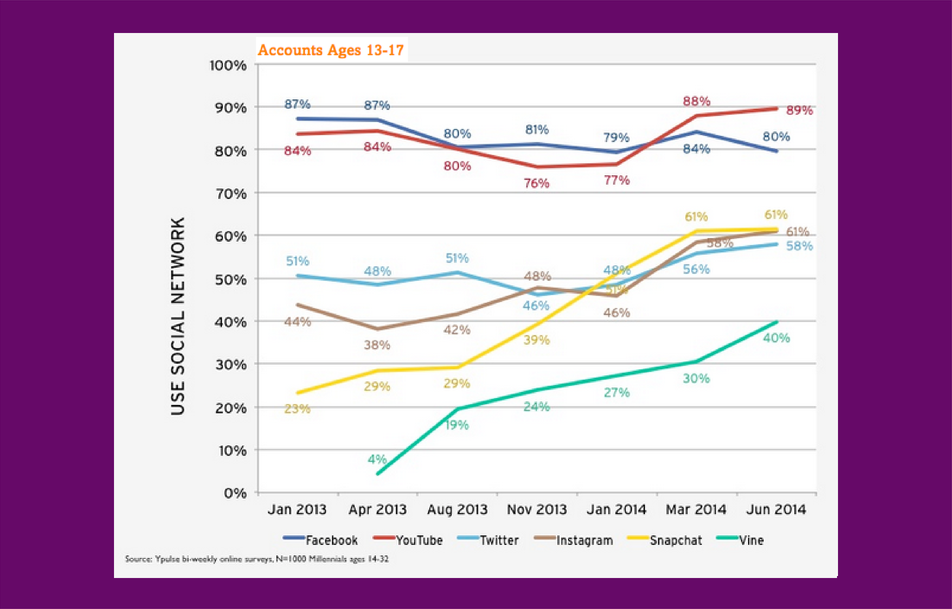 Meanwhile however, Vine, Snapchat, and Instagram have increased in popularity for all young consumers at a quick and steady pace, and skyrocketed in teen use, usurping Twitter and at times Instagram for 13-17-year-olds users. Millennials are hugely visual, and are drawn to things that allow them to display their creativity in a visual way. What these and other apps provide that they are currently not finding on Facebook is a focus on visual communication, which is key for the generation, as well as tools to make the visuals that they share into personalized mini works of art. The other big draw these apps have is a more exclusive circle of followers—there is a real attraction to spaces that they feel only their peers are using.

But just asking Millennials to tell us what they have an account on is not getting the full picture. Many use some networks sporadically, and others open accounts but don’t ever spend any time on them. So we also ask them what accounts they post or comment on daily: 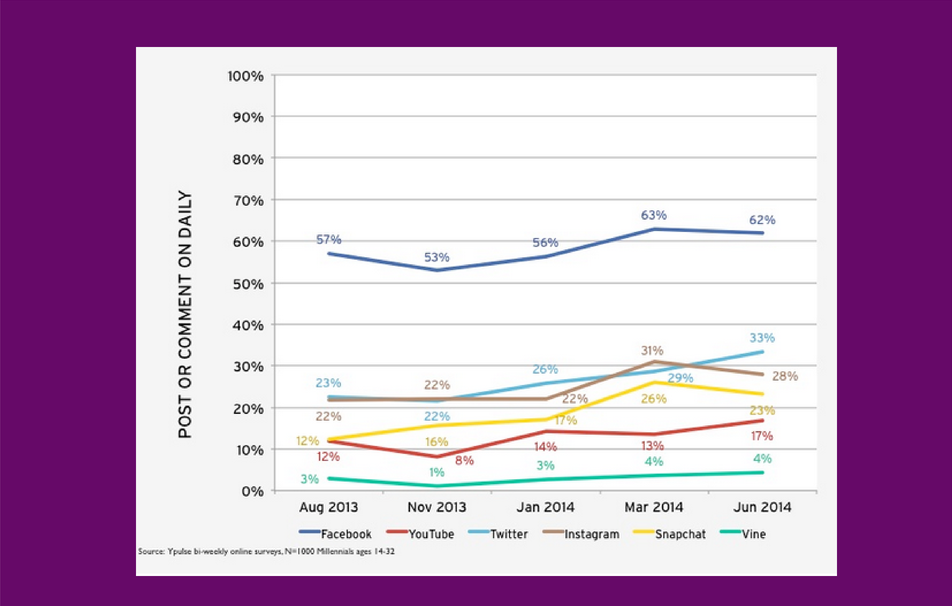 With daily use as a qualifier, we see a different landscape take shape. Facebook is by far the dominant network, with 62% of 14-32-year-olds overall currently using it daily. Instagram and Twitter are battling it out for second place. But daily use of Facebook for teens has dropped significantly to 34%, with Twitter at 38% and Snapchat at 36%. Of course age is not the only factor we see effecting social use, and we look at males versus females to get a pictures of which networks are being used by which gender. Here is the daily activity gender snapshot: 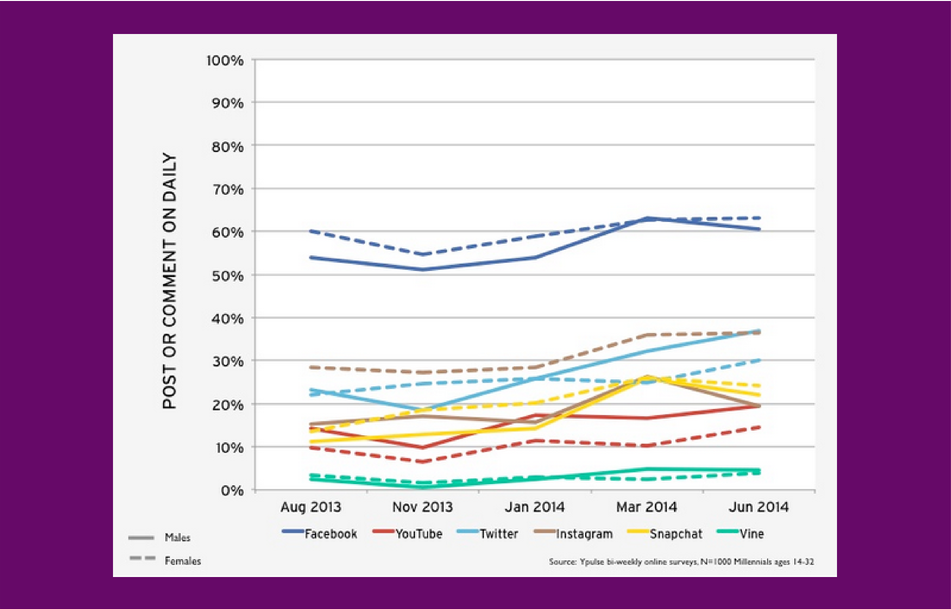 Here it becomes clear that while Instagram and Twitter might be competing for second place in daily use overall, among females Instagram is already the big winner. Use of the network among young females has risen nearly 10% since August of last year, and is far higher than male use. Females, not surprisingly, are the dominant users of most of the networks, save YouTube and, currently, Twitter.

Digging into the data regularly gathered directly from young consumers gives us an evolving picture of their social media behavior, where Facebook likely rules thanks to its longer history, but smaller networks are scrambling to catch up in popularity, and are already winning the battle among some segments. Visual communication platforms continue to draw in more users, especially females, we’ll likely see their popularity rise over the course of the next year as well.

Charts breaking out age and gender differences are also included in each category, and you can find all these constantly updated resources for you to explore in the Data Room of Ypulse.com.