Confessions of a Millennial: Why I Hate the Wendy’s Girl and I’m Not the Only One 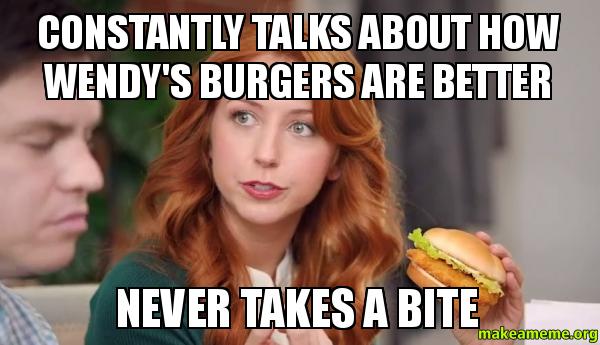 In 2012, Wendy’s introduced viewers to a new spokesperson in an effort to make the brand younger and fresher. The reactions over the last two years have been mixed to say they least. For every Facebook fan page, there is a hate page, and many younger viewers are openly hostile towards Red. Hate is a strong word, and the general dislike for the Wendy’s girl is more nuanced than it appears. On the surface, she is like any other attractive female on TV, appealing to more than half of teenage boys as demonstrated in today’s Instant Poll, most likely because of her looks. But threat-filled Facebook pages don’t just crop up without some truly strong feelings, so we got one Millennial’s full confession to understand just why so many people claim to hate the Wendy’s girl, and what it all says about missteps in marketing to the generation:

After the fifth impassioned conversation with friends and co-workers about our mutual hate towards the Wendy’s girl, I felt it necessary to explore just why she annoys me in the most unbearable way. These views may be my own, but I’m not the only one. The internet is rife with Red hate, and I speak for a large audience of Millennial viewers in saying that when I actively avoid watching her commercials, my TV watching experience is better for it.

First impressions may not be everything, but they do count. The Wendy’s girl was first introduced to audiences with a series of commercials that had her mocking a co-worker for his sub-par burger choices, being judgmental about the eating habits of busy moms, and even questioning their children’s antics. The problem with this approach was an air of pretentiousness about her fast food (and life) choices. Comedian Matt McCarthy summed it up best by explaining: “She’s a hamburger bully.” Yes, we know Wendy’s prides itself on real, not frozen beef patties, but is one greasy fast food meal any better than another? It feels like we’re back at the middle school lunch table. Lately the brand has lightened its “mine is better than yours” approach, but it’s suspicious that videos of her original ads have left behind a trail of broken links. Did Wendy’s purposefully remove the mean girl-esque videos? No matter, her introduction as a snarky know-it-all created a lasting first impression that, to this day, Red is not living down.

She did not eat that.

Over 130,000 people follow the Instagram account @youdidnoteatthat, myself being one of them, and it has called out the trend of models and actresses everywhere faking indulgent food habits. One would think that in commercials for bacon burgers, Asiago ranch sandwiches, fresh fruit-filled salads, and steaming sides that we would witness Wendy’s main cheerleader taking a juicy bite. But alas, watch any ad and you will come to find that she does not put a single morsel in her mouth. Shoving “Miss Conventionally Pretty and Skinny” in audience’s faces, making her the spokeswoman for a fast food chain, while never actually taking a bite of food is insulting to those of us watching the unrealistic scenes. TV content that depicts the details of real life lets viewers know that brands understand them, but unfortunately, Red doesn’t seem hungry enough to take a bite of her own product.

She co-opts Millennial culture in the wrong way.

Millennials are acutely aware when something on TV isn’t authentic, and Wendy’s commercials with spokeswoman Red set off alarms so loud that many admit to changing the channel to avoid watching them. If you haven’t seen the “Have to Tweet It” Wendy’s ad, it shows Red’s friend filming a video of her posing with (instead of eating) a grilled chicken flatbread and then sharing it with his “web friends.” It’s difficult to tell if Wendy’s is making a legitimate attempt at social media humor, or instead making fun of Millennials, but the hipster-looking sidekick and foodie posting storyline seems to point to the latter. It only gets worse in the latest pretzel bun parody, where Red covers the early ‘90s single “To Be With You” clad in jean jackets, flannel, overalls, and a bowler hat. I will be the first to admit that I don’t know this song, but my older Millennial counterparts were cringing all over the internet at the song parody. Speaking to her sartorial choices, members of my generation have built a culture around the revival of unusual instruments and fashions, but having Red, an otherwise pep-in-my-step prepster, walk the streets wearing ‘90s revival fashion and playing a keytar is crossing the line. Both ads are a clear imitation, and almost mockery of, what we deem to be cool.

She’s not even Wendy.

Last but not least, Red is not Wendy. Up until the aforementioned pretzel bun commercial, the Wendy’s girl did not have a name. We’ve actually met the real Wendy before, founder Dave Thomas’ daughter, in a sentimental commercial that nodded back to the brand’s roots. Says one commenter: “Wendy made me and others happy when we [saw] her on TV because she is Wendy, period! She is the equivalent of comfort food (thin or otherwise)! Just looking at her on TV made me smile!” We understand that Wendy may not want to be the face of her father’s empire, but using an actress who seems to have been manufactured to look like the Wendy’s logo, but younger, thinner, and “hipper” just feels wrong.

Ypulse’s Why It Matters:

The Wendy’s girl hate says a lot about the kinds of missteps that brands can make when trying to rebrand for a younger generation. Lesson one is repeated so often it feels like a cliché, but we’ll say it anyway: authenticity is key. A spokesperson better take a big bite out of that burger if younger viewers are going to believe they could actually really like it, and if they’re used to seeing a family member promote a product it needs to be clear that you aren’t trying to replace her with a younger, slimmer model. Secondly, getting the tone right when echoing Millennial-speak is essential. If it seems like you might be making fun of what they do, you should probably rethink it. Finally, if you’re going to play to Millennial nostalgia, you better treat it with care. They do not take kindly to their beloved songs, TV shows, and culture being co-opted for profit, and would rather see brands pay homage to the nostalgia they take pretty seriously.