The Next Wave of Temporary Internet

In the early days of social media, older Millennials thought of networks as secret clubs inhabited by just their peers, where they felt free to broadcast their every thought, their whereabouts, and incriminating pictures with little thought. Once that exclusive club was infiltrated, it took some time for them to adjust, but they’ve been doing so by gravitating towards networks and tools that keep things on the down low…or at least appear to. Snapchat has been leading the way in the departure from Facebook’s “anything and everything to anyone” sharing practices, and the app’s continued increase in popularity shows that there is a growing demand for an online social experience that is more private and less permanent. As one 23-year-old male from New York explained to us, “Snapchat is a trend because it’s easy to use, and since pictures get deleted, it ensures some (or the illusion of) privacy.”

In the socially connected world of a Millennial, each network holds its own, specific purpose: Instagram for authentic self-expression, Twitter as an acceptable place for status updates, and Snapchat for non-judgmental, quick-fire storytelling. Facebook, meanwhile, has remained an all-in-one site that includes privacy and exclusivity as an afterthought, instead of a focus. Now the network is playing around withSlingshot, a Snapchat copycat app that includes extra add-ons like reaction shots and image unlock features. Whether Slingshot will be the Next Big Thing in social remains to be seen, but new apps and sites are also following in Snapchat’s footstep, making privacy and impermanence some of the top priorities in messaging and social media. We’re keeping our eyes on the following three temporary apps, which are not only following in Snapchat’s footsteps, but upping the ante in the privacy game: 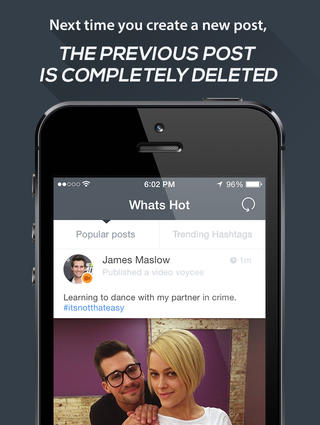 There are already apps that encrypt text and make images disappear, but new to the app store this month is Voycee: a completely self-destructing social network. When a user creates a new post, their previous post, including associated images, audio, or video files, likes, hashtags, and so on, is conveniently erased without any historical trace. Only one post (the most current) is displayed at a time, putting more emphasis on each piece of content shared as it alone represents a user’s experiences. Creating a network that is self-destructing in nature is a call for Millennials to live in the moment and focus undivided attention on what is happening right now. Voycee also goes against the rise in data collection, in favor of the pursuit of privacy. Users can worry less about information being collected without their consent, since when content is wiped from their profiles it is also deleted from the app’s database and internal servers. Every post on Voycee becomes a clean slate, giving users the ability to reinvent themselves daily and not worry about leaving behind a trackable timeline. 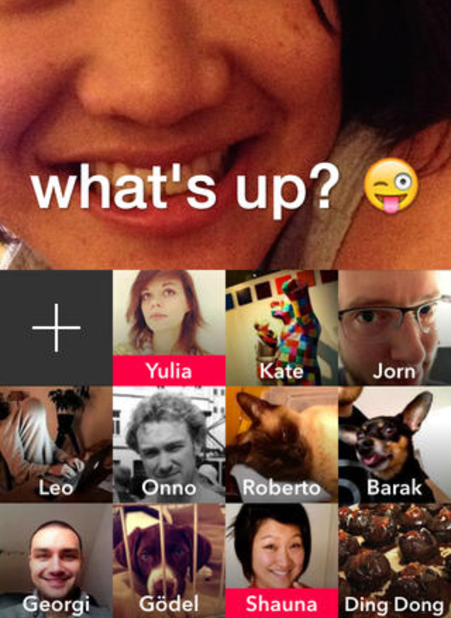 The creators of Taptalk believe that one tap is all it should take to send images to friends. Doing away with multiple screens, timers, and the added bells and whistles of Snapchat’s storytelling features, Taptalk lets users select a recipient, take a photo or video, and send all in one swift finger motion. The streamlining of features makes it the fastest chatting app on the market. Up to 11 recent friends are displayed at one time on the app’s home screen, and though more friends are just one swipe away, users are only able to communicate on a one-to-one basis, decreasing the ability to “broadcast” thoughts to a larger group. Being able to send mass messages is undoubtedly an important feature for group-oriented Millennials, but Taptalk turns what would be a one-to-one text conversation into image or video exchanges, creating a more dynamic way to converse. Efficiency and speed are at the top of the Taptalk bill, making visual conversations faster and easier than before. 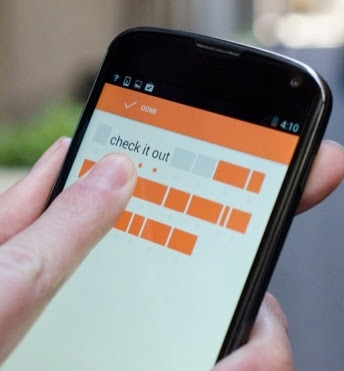 Snapchat pictures don’t really disappear, Google can read our emails, and someone might be listening to our phone calls. At this point many Millennials believe that nothing is truly private. But one app is working to keep some conversations confidential: Confide destroys messages bit-by-bit as they are being read. Words are hidden behind colored bars when sent, revealed only one-by-one as the recipient swipes over them and are deleted almost immediately after. Missives cannot be forwarded or screenshot, and users are alerted to whether or not someone on the receiving end attempted to do so. Encrypting text lets any conversation on Confide become “off the record,” mirroring the mentality of casual or confidential in-person conversations and allowing information to pass through the internet undocumented.