Q&A With Tyler Oakley: The YouTube Star Whose Fans Raised $500K For His Birthday 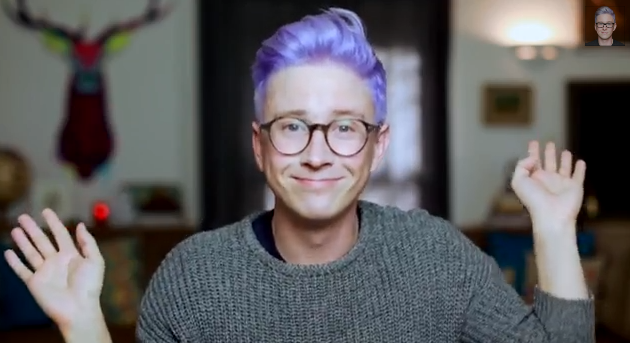 Meet Tyler Oakley. His “YouTube family” (subscribers) grew by over 3 million last year and today stands at 4,324,655—a following that rivals top entertainers on the platform. His vlog posts are deceptively simple, filmed in the same colorfully decorated room, spotlight on, and Oakley ready to share whatever is on his mind. But watch him tell one story and it’s clear that he has tapped into Millennial tastes with his personal storytelling style. Always charged with intense positive energy, Tyler reveals intimate details, and can talk non-stop without missing a beat. He claims to be fluent in five languages: “English, emoji, sexting, sarcasm, and sass” and has gossiped with President Obama himself. While his best friends include the elite of Millennial YouTube entertainment, the magic in Tyler’s videos lies in his ability to make every viewer feel like they too are his best friend.

Wanting to use his influence as a high-profile LGBT vlogger for something more, Tyler began a birthday fundraising campaign last year benefitting a charity close to his heart: The Trevor Project. This year, the campaign reached its goal of raising $150,000 in just six days. By the end of the full 50 days of fundraising, Tyler’s online “family” had raised over half a million dollars—$525,679 to be exact— for LGBTQ youth. We got the chance to speak with Tyler about his monumental rise on YouTube, the success of his birthday campaign, and how views on the LGBT movement are changing within the next generation.

Ypulse: Tell us about how you got started on YouTube.

Tyler Oakley: It was back in 2007 and I was a college student at Michigan State University. All of my high school friends went off to different colleges, so I wanted to find a new way to keep in touch with them. I had Facebook, but I also wanted to show them my dorm room and I hate calling people, like it’s the worst thing in the world. I saw this guy making video blogs just in his room on YouTube and it was this whole world that I didn’t know existed. I made my first video, which was so terrible looking back at it now, and sent it off to my friends. I kept doing that, telling them stories, talking about parties or classes. As I went on I realized, oh wow, this video has 100 views and I don’t have 100 friends, so other people must be finding it. Everything kind of grew from there.

YP: In the past year alone you’ve gained over 3 million subscribers on the platform. Did you have a plan for your channel and how to build a personal brand?

TO: There was never a moment when I realized, wow this is going to be a career or anything full time; that was never my intention. It was never the game plan to create something like this, but after it’s happened, it’s crazy to look back at. I think I really dedicated myself to a structured schedule…I did what I could to succeed, whether it was collaborations, traveling, thinking outside the box, or putting a lot more effort into editing. Over the past year I’ve also worked really hard to foster my fan community and be a part of it, not just facilitate it. I spend every day on Tumblr with the people who watch my videos. I respond to their tweets every day. Every week I do a Q&A with them. It’s constant. My fans are just excited to meet me and I’m excited to meet them because they’re the people who make my life possible. I tried to build something bigger and that passion translated.

YP: What is The Trevor Project and how did you first get involved?

TO: The Trevor Project is the leading national organization for crisis and suicide prevention among LGBT youth. I used to intern there back in 2009. The YouTube community has a day each year where they run the Project for Awesome where we all make a video about our favorite charity. In 2008 I found The Trevor Project, which was not that well known at the time, but was something that really resonated with me so I made a video about it and YouTube ended up featuring it on its front page. The founder of The Trevor Project even reached out. It was something that everyone got excited about and really resonated with my audience.

YP: Where did the idea for your birthday fundraising campaign come from, and how did you go about making it happen?

TO: Well, I have a P.O. box and people always send me stuff for my birthday, but I don’t need anything. I thought ok, let’s do something bigger, let’s do something to help people. So last year we set out to raise $24,000 for The Trevor Project [through my birthday campaign] because I was turning 24 and we actually raised $29,000. This year, with all of my subscriber growth, I wanted to do something even bigger. I thought maybe $150,000 would be doable, but a lot of people didn’t think it would be possible within 30 days, so we extended the campaign to 50 days. We launched it and within 6 days we reached $150,000, which is crazy. After the whole 50 days, we ended up raising over half a million dollars. It was insane, but in the best way possible.

YP: Why do you think the support this year was so drastically different than the first annual campaign?

TO: The YouTube community is a family, so when it came to the birthday campaign I think my viewers felt a lot more connected to it, whether it was because I had been talking about it for years now, or because it was something that they wanted to do for my birthday. On top of that, this year I was able to offer some rewards, like a signed poster, a Skype call, or a mention in a video. There was also a grand prize where one person was picked to be flown out to LA, put up in a hotel, and have me take them out for an adventure date night. With all of those things combined, I think people got really excited about the campaign this year.

YP: Tell us a bit about your fan base. Who are they and what do they like to see from you?

TO: It’s hard to pinpoint. I would say they’re younger, usually girls, and they’re from all around the world. They are very excited about a lot of things and I think that’s my favorite thing—that my viewers are very passionate and engaged. Say we want to trend something, they put out the word to say let’s get it trending guys. I’m really lucky to have them.

YP: Do you see yourself as an LGBT activist to your fans and among the YouTube community?

TO: I think to self-proclaim that is a drastic thing. I feel like it’s a status that is earned, not decided on by the person who wants to say they are that. So, I don’t know! I would love to do as much as I can for a community that I want to support. At the end of the day, it’s my passion to educate my audience and myself about LGBT issues and try to do something that is actually going to create change in the community.

YP: What do you consider to be the major struggles currently facing the LGBT community?

TO: I think the current struggle for the LGBT movement is that people need to see the bigger picture. There are a lot of things here in America that we can accomplish, but there are literally people being killed all around the world just because of who they are. While marriage equality is wonderful, we can’t forget that people are being killed for being gay. Helping people outside of our communities, just as much as we want to help the people in our communities, is going to bring us closer to equality and justice and safety for a lot of people.

YP: Explain to us the cultural sentiment towards LGBT among Millennials today. How is it evolving?

TO: I think it’s getting better as time goes on. I was doing live streams every Sunday during the birthday campaign where I would spend some time calling people who donated. These were fans from all around the world, usually younger, and I would ask them, why is The Trevor Project important to you? Being able to give them the microphone showed me that the next generation gets it. It’s not even an issue for them—they don’t understand how half of the things that have been changed in our generation were even an issue before.

YP: What do you see happening in the future for your birthday campaign benefitting The Trevor Project?

TO: After this year, I’m just wondering what I could possibly do to make it even bigger and better next year.

North America
How Food & Bev Brands Are Updating the Jingle with the Help of Hot Musicians
In the last year, food and bev brands have been tapping musicians (and actors) to wri...
North America
Gen Z TikTokers Are Loving This Y2K Filter on The Viral List
A Y2K TikTok filter is making thin eyebrows trend, Arden Cho opened up about why she ...
Western Europe
This Tinder-Meets-Fashion App Is Helping Combat Clothing Waste in The U.K.
This app is working to combat clothing waste by helping young people in the U.K. find...