Scaling the Wall Between Work and Play: Q&A with Brooklyn Boulders 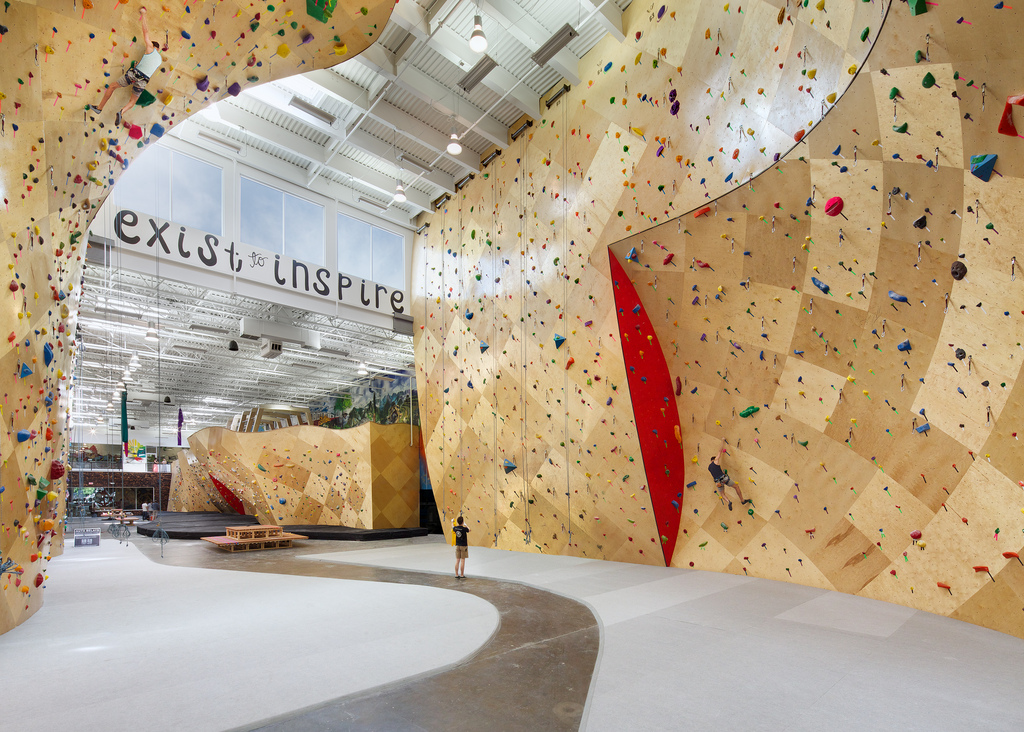 The Millennial generation has begun to redefine modern workspaces, calling for collaboration and flexibility in order to facilitate more productive and, in theory happier, working environments. As they choose start-ups and freelance careers over 9-to-5 corporate positions, they are looking for space outside of their living rooms to provide the right cultural setting for creativity and innovative ideas. As a solution they’re breaking down office walls, opting to collaborate with each other and use a new definition of work-life-balance to their advantage. Jesse Levin is the co-founder and “Senior Cultural Chameleon” at Brooklyn Boulders, a 40,000 square foot facility, which includes a 120′ long 23′ high bouldering wall with a built in active collaborative workspace, in the greater Boston area. Brooklyn Boulders hosts over 2,000 members in its Boston location, representing a range of ages, but the majority of members are Millennials who are looking for an integration of work and play and a non-traditional take on a workspace, allowing them to step in and out of work modes seamlessly and collaborate with like-minded peers. We sat down with Levin to talk about collaborative workspaces, the Millennial mindset, and how work culture is changing with the new generation.

Ypulse: What is the driving force behind Brooklyn Boulders and how does it serve the Millennial mindset?

Jesse Levin: The idea is that physicality stimulates innovation and creativity, blurring the lines between work life and play. We designed these hybrid centers as a platform to bring together very disparate groups of people who would not otherwise collaborate, and climbing is the medium by which we do that. So we have these massive facilities and inherently this sport attracts a diverse, eclectic group of people—aerial circus dancers, artists, musicians, engineers, and so on. Brooklyn Boulders brings them together and lets them do all of these cool things under one roof. There’s so much stimulation in the space, physically and visually, from art all over the walls to slack lines, people hanging from the ceiling, climbing competitions, to all kinds of capoeira and yoga classes.

YP: How do you think work culture has changed in the past few years among the Millennial generation?

JL: Seven or eight years ago the whole paradigm rapidly shifted, and the ultimate goal of start-ups and social entrepreneurship really expanded. We realized amongst our cohorts that we all have the collective capacity of skills to effectively empower each other. Younger venture capitalists, marketing experts, UX and UI guys all bring something different to the table, and can come together for a collaborative effort. 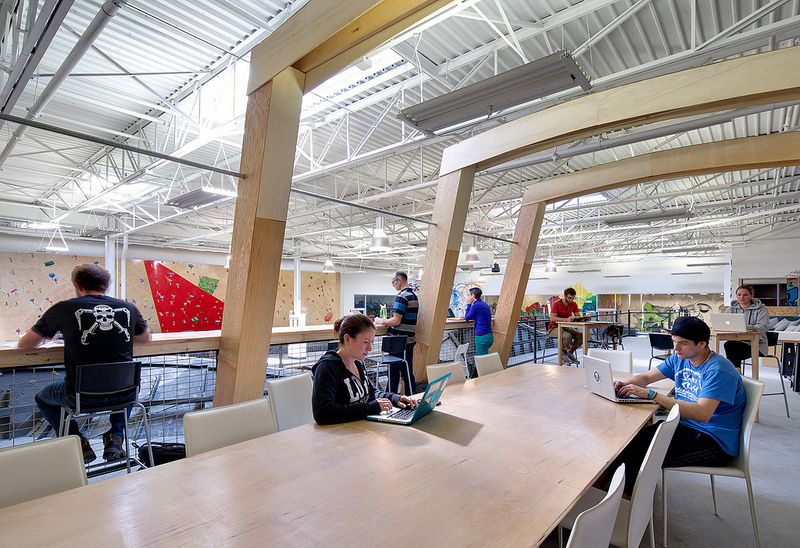 YP: How do you see the work habits of Millennials being fostered in a flexible environment like Brooklyn Boulders?

JL: In the middle of the day you’ll see people here working on projects, many coming from start-ups or not-for-profits. But even larger corporations are beginning to put more focus on having flexible work hours or work from home policies. We have plenty of professionals who come here and work in this space while being able to hang out with their buddies and get their workout in at the same time. Not until Brooklyn Boulders has anyone built a collaborative workspace around physicality. People here are productive, creative, happy, and they’re pushing themselves because in this atmosphere they can work but also climb, jump, swing, and play.

YP: What are some unique and unconventional ways that the space is being used?

JL: We’re constantly hosting brain jam sessions and sitting down with young start-ups to help them incubate their ideas, or giving people space to fly drones to practice their video shooting. It’s very much mixed use and things happen organically in this environment. We have different events and presentations that are open to the public and along with community gatherings held at local restaurants where the focus will just be open. We’re working to have a speakeasy-type salon series that will be curated to give community members a chance to access the community at large. The Boston area Brooklyn Boulders was built as a 2.0 version of the original and we want to make each facility more impressive as we go. This year our goal is to have two to three new facilities up and running, including one in the Chicago area, New York’s Long Island City, and possibly Pier 57 in Manhattan down the road.

YP: Tell us more about the collaborative workspace that is unique to Brooklyn Boulders Somerville. 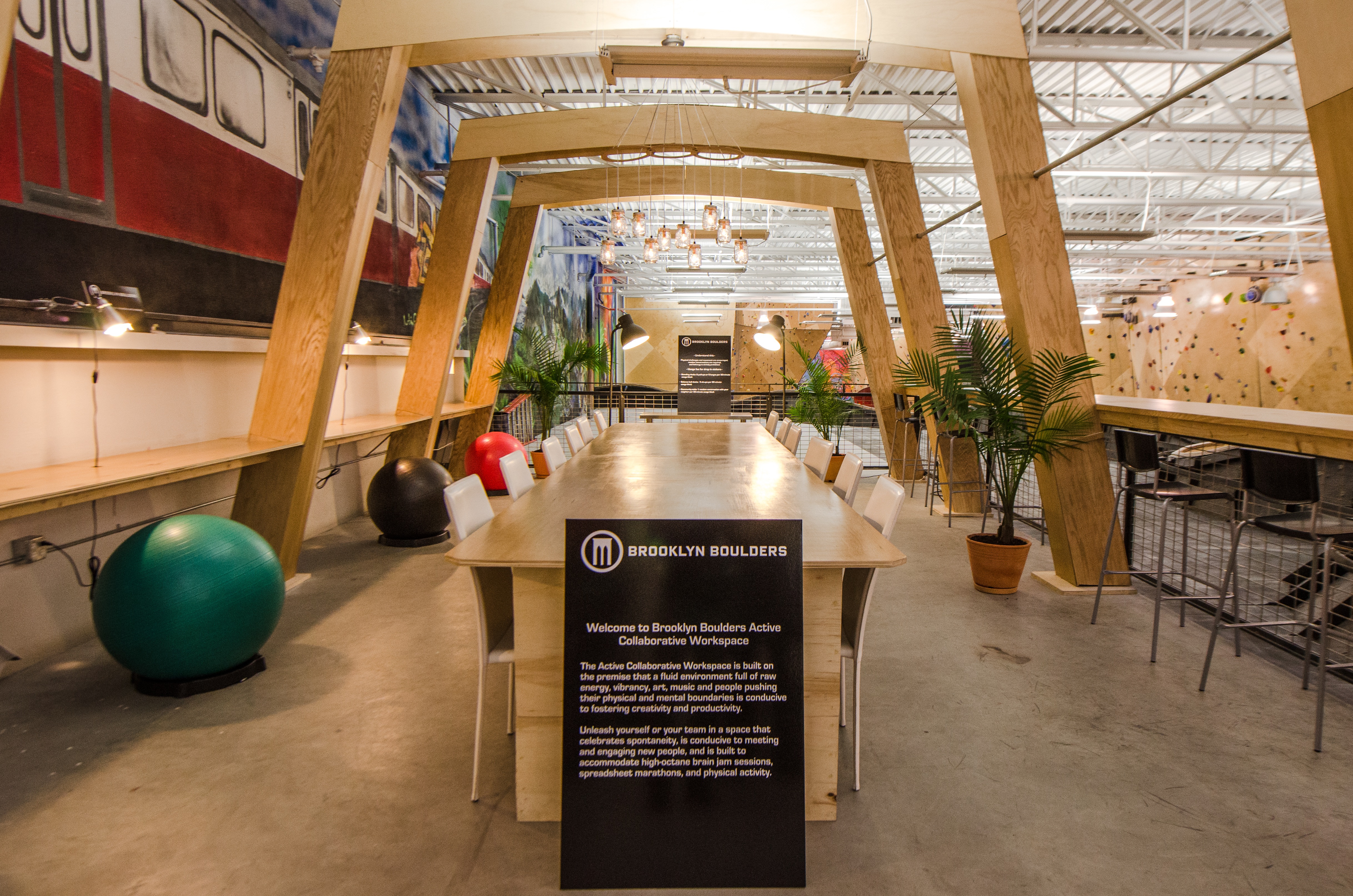 JL: I am sitting on top of the bouldering wall right now and am looking at the active collaborative workspace. There’s people sitting on yoga balls working on their laptops, people doing sit-ups, running, climbing. It’s very much an active, all encompassing space. In the collaborative workspace, people can come in and jam out ideas with their start-up team and in between take a climbing session, jump in the sauna, take a yoga class, and then go back to finish their project. It’s a very different type of environment, one that’s conducive to activity and noise, bouncing around, and meeting all kinds of different people.

YP: How was this facility originally founded?

JL: Well, I went to the original Brooklyn Boulders in Brooklyn, NY when Hurricane Sandy hit to find a space for 300 veterans as an active response effort. In 12 hours we had the whole place open for them to stay. It was this very dynamic, non-traditional, non-linear creative space and I was very intrigued. Originally, I tried to get the founders to come out to San Francisco to build out this concept I had, but instead I went to Boston and joined the team. We had this incredible piece of real estate and a wildly entrepreneurial team, including Lance Pinn, Jeremy Balboni, Gavin Heverly, Chris Ryan, and Veronica Dale. I was given a blank slate to devise strategies around creating a very non-linear and creative community space that was anchored by some of the best indoor climbing in the world.

YP: Brooklyn Boulders offers a host of programs for its members. Do you actively seek out partnerships and new ventures?

JL: In the beginning, we launched this place with very much a guerilla and grassroots mindset. We reached out to the community by inviting the top custom bike builders, top yogis in the area, and so on, asking them how they would use this facility. With that began this culture of hosting fashion shows and other creative outlets. We actively seek creative partnerships, but people are also coming to us.  We have partnerships with all of the Boston area colleges, and in Boston we’re just now launching our youth climbing program, which we see largely increasing our student member population. 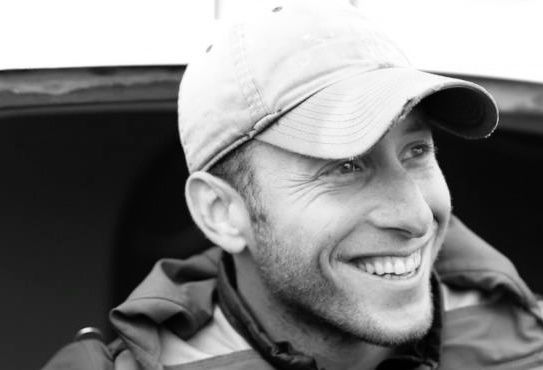