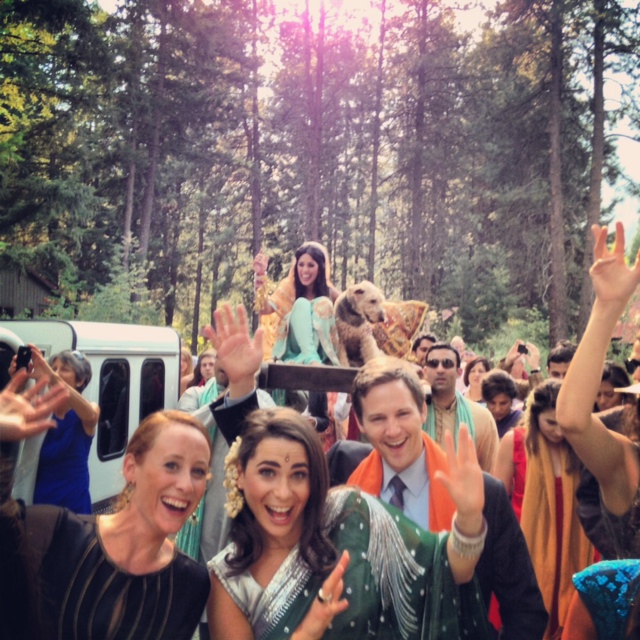 Today’s post is from Ali Driesman, Ypulse’s Director of Insights and Inspiration, who is giving us a first-hand look at the generational trend we’re calling Splice of Life. Splicing explains the phenomena of Millennials picking and choosing elements of structures and traditions that they like, and splicing them together into new products, styles and ways of life. We’re seeing this trend in action more and more, and our piece today looks at the cultural splicing that goes on at Millennial weddings.

The sun is out, the flowers are in bloom and that can only mean one thing for those older Millennials…wedding season is in full swing! Yep, although Millennials are getting married later in life, it is happening and per usual, they are redefining the norms for this tradition.

Being an older Millennial myself, I have attended my fair share of weddings and have taken notice of how Millennial nuptials are veering from the traditional path. The generation grew up exposed to an endless array of choices and ways of life. They have became accustomed to extracting pieces of culture most relevant to them in everything from fashion to food, and splicing these various elements together to fit into their lives. This ‘splicing sentiment’ is apparent as some Millennials define the next “adult” chapter of their life: marriage! For both the ceremony itself and the marital decisions moving forward, they are splicing together cultures, religions, and traditions to create their own unique ways of kicking off their new lives together.

Recently, the ceremonies and receptions I have attended have included a Christian/Jewish wedding, an Indian/American wedding, a Chinese/American, and an Indian/Jewish wedding. The ceremonies have been striking, combining various age-old traditions from both the brides’ and grooms’ sides, while adding their own personal spin and interpretation to their new collective life. From the food to the customs, Millennial weddings are a showcase for the ways that diversity is engrained and creatively incorporated into their lives. Whether watching the priest and rabbi alternate lines, or indulging in the food combinations of the family kimchee recipe alongside the American-Nuevo main dish, diversity was embraced and displayed through personalized splicing that stitched together cultural threads.

Take for instance the Indian/American wedding I was a guest at. Both bride and groom were 2nd generation Indian, with their respective families from different cultural and religious backgrounds. Neither of the newlyweds was particularly religious, but the ceremony was a beautiful celebration in which they spliced together elements of Hindu, Sikh and American traditions. The bridal dresses ranged from a tunic dress for the Sikh wedding, a sari for the Hindu wedding and a long, blue gown for the reception. There was a buffet with Indian food for the rehearsal dinner/Sangeet, and ‘surf and turf’ for the reception. The music jumped back and forth between Justin Timberlake and Bollywood tunes. Everything was given a unique cultural and personal spin, even the traditional Indian Barat, a traditional procession in which the groom travels into the wedding venue. Usually, the groom will ride up to the bride and her family on a white horse; however, the bride, not wanting to miss out on any of the fun and noting that times have changed, insisted that she too was hoisted up and carried to meet the groom half way to the alter. I also couldn’t help but think that it is probably not an Indian custom to have the family dog hoisted up alongside the bride on the platform next her!

While the traditions and details differed for the various weddings I have been to, one theme remained consistent: there was a real emphasis on the importance and closeness to family throughout. This comes as no surprise with Millennials growing up in a “peer-enting” environment, examined in Ypulse’s “First Generation Digital” Lifeline report, in which parents are often as much (or more) their childrens’ friends than their authority figures. It was clear that they foster a closeness with their parents, and often make thie relationship a featured part of the day as well. Parents’ speeches touched upon the significant time spent with both their children and their spouses with no indication that this was going to change now that they are married. In fact, I have noticed from some of my friends who have been married for a bit of time now, that being married has not changed the family dynamic all that much.

The theme of splicing was also consistent at each of the weddings. It seems that no matter where they are from or what their cultural background might be, it is becoming increasingly common for Millennials to pick and choose the elements of tradition that work for them, splicing together cultures to create their own wedding norms.

Ever since her days as a Red Bull Student Brand Manager while attending Brown University, Ali gravitated towards the power and impact that the Millennial generation held at its fingertips. In her various Marketing roles at Microsoft, she quickly found her sweet-spot on the Student Marketing team with an expertise in youth marketing. She drove marketing campaigns, launched offers in market, and led Worldwide student competitions; always diligent to ground herself in the research for these initiatives. She sees Millennial marketing as an opportunity to be bold, innovative and saucy and this is what keeps her coming back for more.  At Ypulse, her role continues to tap into the creative inspiration from youth culture to amplify your market research and insights in style.