Last week, we spoke a little about how Denny’s mockingly jumped on the brandjacking bandwagon with a subtle yet funny tweet in response to the #mtvhack. That tweet was the tip of the Twitter iceberg: Denny’s has consistently been creating some great social media content and setting an example of how businesses should be interacting with their followers. In the spirit of the Serious Faux Pas series, we’ll take a look at how Denny’s is hitting their social media stride by not taking it all so seriously.

Denny’s has put its social media in the hands of ad agency Gotham Inc. Fast Company wrote: “Instead of its ‘social media best-practices strategy’—posting a formulaic mix of queued-up questions and product shots at scheduled times—it decided to play on Denny’s atmosphere [and host conversations].” At the time of their brandjack tweet, twentysomething Gotham employee Arielle Calderon was in charge of tweeting on behalf of Denny’s. Millennials are digital natives fluent in the language of online communication. Given that the franchise is open 24 hours, Denny’s has been aggressively promoting late night dining for Millennials; and they know the best person to talk to twenty thousand twentysomethings on Twitter is a fellow twentysomething. Their followers certainly noticed the difference. For Denny’s, Twitter isn’t the place to get serious, it’s a place to have some fun. Here are some of the ways that Denny’s is #winning Twitter.

1. By staying playful on a personal level. Taking a look at Denny’s Twitter feed, many of their tweets are towards specific fans, responding to their posts about the restaurant. Others pose questions, and then later respond to the answers they get. Brands that are beginning to take advantage of the one-on-one conversation possibilities of social media are gaining attention, and Denny’s consistently fosters individual interaction with young consumers that goes beyond the average customer service speak: 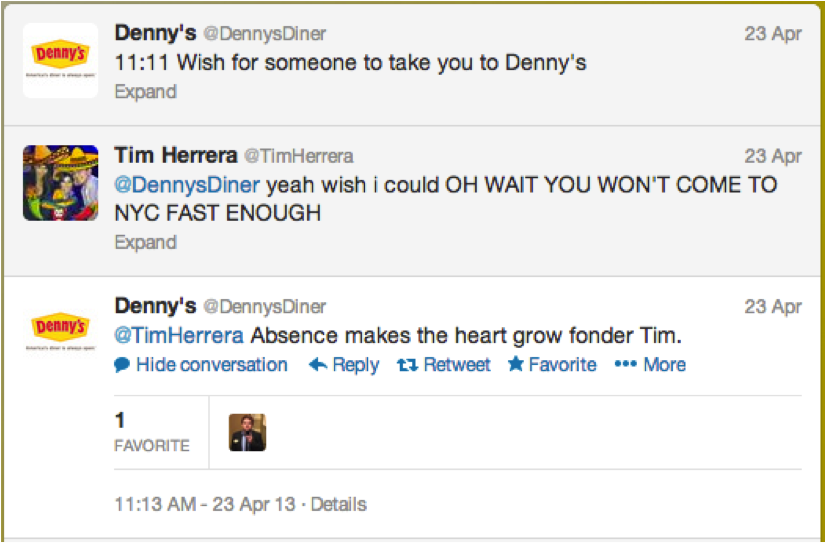 2. By talking to their audience the way their audience talks. Millennials have a knack for seeing through obvious marketing stunts. Communicating using the proper language and “etiquette” fosters trust and authenticity for brands because it helps to put them in the mindset of their consumers, and allows them to become a part of the cultural conversation in a more organic way. This requires a grasp of current memes and social media lingo so natural that it doesn’t come across as an imitation, and Denny’s shows a grasp of not only how Millennials talk, but also how they talk online: 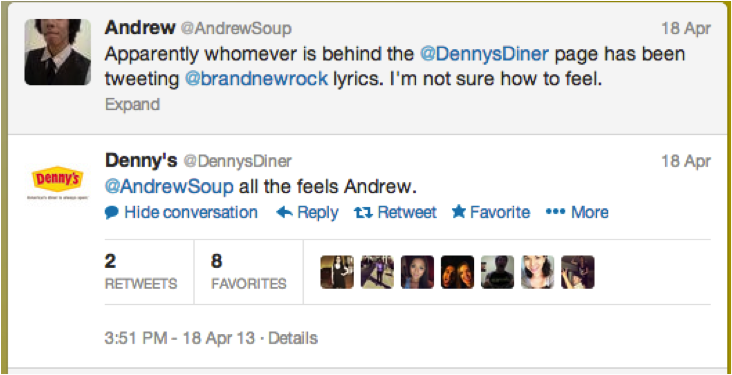 3. By not being afraid to talk about more than burgers and fries. There’s no denying that social media is a tool for marketers. However, it pays to deviate from the normal promotional content. Customers are looking for brands that can offer them new experiences, on top of the deals and discounts they have come to expect. Sometimes this requires a bit of creativity and imagination, and a brand that isn’t afraid to veer off the path of their own product category into other conversations. Denny’s isn’t afraid to post pictures of memes, not force conversations to loop in their own marketing efforts, and engage followers in conversations about more than just food: 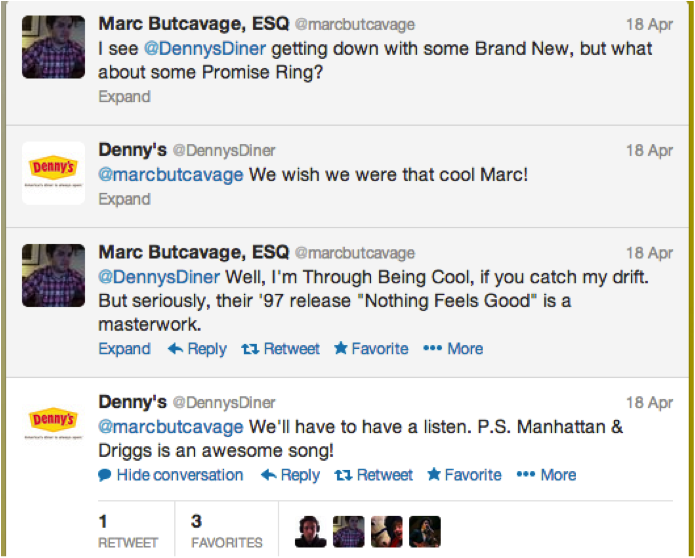