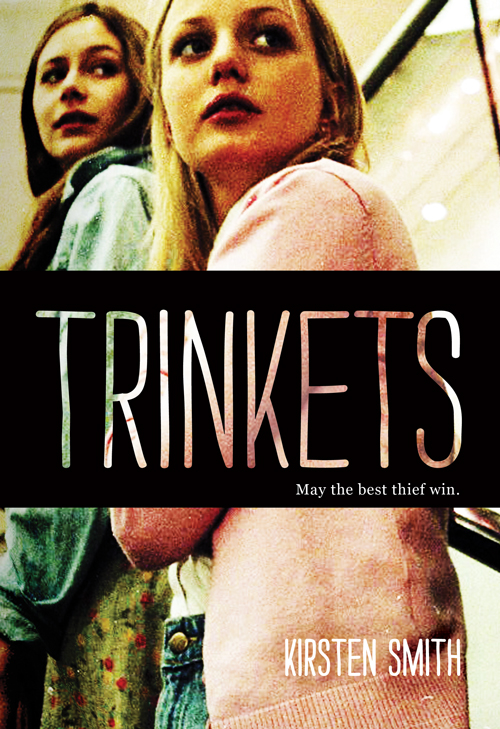 Ypulse had the pleasure of sitting down with Hollywood screenwriter and American novelist, Kirsten Smith; responsible for teen hit sensations like 10 Things I Hate About You and Legally Blonde. Her new book, Trinkets, a tale of three teenage girl shoplifters, is a gritty, dark comedy that takes place in a rich suburb outside of Portland. We had the chance to talk to her about her new book, the politics of making a teenage girl movie (in comparison to a teenage boy movie), the trends of the modern day female, and the cultural shifts of the teenage girl spanning the past two decades.

YPulse: Trinkets has so far had a great response. Famous blogger Tavi Gevinson said she even wants to devote a “shrine to it”. How was writing it and how are you feeling about the launch?

Kirsten Smith: I’m really excited about it and I am huge fan of Tavi’s. She’s one of the smartest people I’ve ever met, and I know that sounds crazy because she’s 16, but it’s true.

KS: It was a long journey to write the book because I was in the midst of getting a bunch of screenplays out so it feels amazing to finally get it out there.

YP: How long did it take you?

YP: Wow. Did you find yourself fighting with maintaining relevant subject matter? So much has changed in such a short period of time, primarily technology.

KS: Yes! Well, my friend and former assistant, Hope Leon always jokes that when I started the book, cellphones were the size of a giant purse. It feels true in a way because when I started writing it iPhones or Andriods didn’t even exist. Another way I went around that was that I chose not to focus on the technology aspect. You’ll notice it’s not very tech specific, it’s a little more classic in the way that the characters are operating.

YP: It’s funny you say that because when I was reading it I felt somewhat nostalgic for the 90’s. It almost brought me back to My So Called Life or even earlier, to Heathers. It felt like a dark, raw comedy without being overtly exposing, like we see a lot of nowadays. The dialogue felt very accurate even though the tech aspect wasn’t there. However, there was one aspect that I thought was very inline with today’s teenage culture:

YP: {Excerpt from the book}: “I’m a secret connoisseur of Mirror Faces. Every girl’s is different. My mom’s is a smoky glance, eyes half shut, all sexy and mysterious. Kayla puckers her lips like she’s making a kiss, sucking in her cheeks. Taryn tilts her chin down, with a saucy little half smile, angled in a way so she looks ten pounds lighter. Too bad none of them can pull it off in real life. That’s what sucks about a Mirror Face; you make it because it’s how you want other people to see you, but you’re the only person who actually gets to.”

YP: “Mirror Faces” reminds me of the Selfie trend. Girls are becoming hyper aware of themselves, and what their package is. I felt the “Mirror Face” comment captured that perfectly.

KS: I just met a young writer who read the book and screamed, “Ah! I can’t believe you wrote about Mirror Face! I’m writing about the Selfie in a screenplay I’m working on right now.” I think it’s adding a different aesthetic to the teenager that we’ve never quite seen before. They’re thinking about themselves as a brand.

YP: Ha, what an interesting image.  It’s true, they are very aware of their own package and their identity is actually being fragmented online as they experience different social media platforms and through the way in which they consume media [with multiple screens].

YP: Which reminded me a lot of the three characters in your book. They were told from three different perspectives, giving the reader a unique sense into the mind of each character who are so different from one another. On the outside, demographically speaking, you would never put them in a clique together, but they come to find that they are all bonded by the same interest, which today, is something the internet fosters as it brings different people of all backgrounds together based on interests. Where did you get the inspiration to tell the story this way?

KS: Oh, that’s an interesting analogy! I wanted to write about this notion of a shoplifters anonymous group. I always had this fantasy that I would go to this support group and find my ‘other selves’ there, which I guess now is happening in the digital world. We’d be part of this secret club, but instead of getting better, we would be criminal all together. At first, I wanted to write it as a female Ocean’s Eleven, where they all plan a heist, but my ability to plot a heist is a bit too limited.

YP: But I’m glad you didn’t take that route because of the timing of the film, Spring Breakers. I think it would’ve gotten lost in the shuffle and this way it stands out a lot more. Which is another aspect I wanted to talk to you about…this notion of “good girls gone bad” with a very aggressive push. And this book falls into this category with the shoplifting theme, but not as graphic or over-exposed as we’re now so used to seeing.

KS: Right, and Sofia Coppola’s Bling Ring too. It’s definitely reflecting the zeitgeist in the way that you can’t be a good girl for very long until you’re going to want to take the natural progression to shock value. I think the 90’s were a little more “PG-13” and in this world, teenagers are much more “R” because of how much access they have.

YP: Is that your feeling of the difference between now and say, 10-20 years ago, where the boundaries are almost nonexistent anymore?

KS: Yes, definitely. Now it’s much harder for teenage girls to get attention because they’re almost competing against each other online the way brands do. I was reading an article how teenagers are using Instagram as a game to get more followers.

KS: Right, and it just seems so time consuming and so focused on the collection of a number, very much a reflection of a capitalistic society. They’re almost naturally capitalistic and they don’t even realize it.

YP: Which makes me think of the title: “Trinkets”.  The title of the book seems very much to be about how teenage girls put an incredible amount of meaning onto objects. Did you consider that when you were writing the book?

KS: In a way, yes. What I found when I was researching about shoplifting and the psychology around it, is that it’s really about feeling special because you’re getting something for free that others aren’t. It’s almost a way of setting yourself apart from everyone else, which is what we were talking about earlier, how teenage girls really find it difficult to stay unique nowadays. Creating your own swag, statement, or personal logo. It’s another way to stand out.

KS: And of course, the fizzy thrill of it —criminality is something that is part of the teenage girl experience. Also, there’s nothing more intimidating than a group of teenage girls walking down the street. It’s a powerful visual, there’s always a feeling that they’re holding a ton of power. Your eye is drawn towards them because they’re the emblem of freedom and youth. And they’re unpredictable.

YP: Right, and they’re not really concerned about being on their best behavior the way that you do when you become an adult.

KS: Exactly, and they’re having so much fun and they don’t need “you” to have fun.

YP: It’s interesting you say that: “They don’t need you to have fun.” They can own it, they own the experience. Especially during a time where everything is about collaboration, and sharing….this is a time when they can actually own the moment by themselves, and they are in charge without anyone’s help.

YP: Speaking of powerful visuals, who designed the book cover? I love how raw and voyeuristic it looks…almost having a “caught-on-camera” vibe to it. Who was responsible for that?

KS: It was a wild journey with the cover. We had many different versions, but eventually scrapped them all and went for a whole new version. So I had a friend of Tavi’s, who happens to be a really great photographer, named Perta Collins. She did a bunch of shots, then Little Brown [the publisher] found a great title treatment and messed with the chosen image a bit to get it extra gritty. It was incredibly collaborative and I love how it came out.

YP: Have you thought about turning this book into a movie?

KS: Yes. I have thought about it but I wanted to release the book first and see how people reacted to it before I sat down to write the screenplay.

KS: It’s interesting though, because we discussed how Millennial culture is really pushing the boundaries and that’s become the new norm, but studios are still so sensitive about releasing an “R” rated movie. It’s really hard, if not impossible, to get a teenage girl movie out there with an “R” rating, unless it’s an independent movie, like Spring Breakers. But the rules don’t really apply to teenage boy movies that are rated “R”, like American Pie, Superbad, Project X, 21 and Over…as real life has gotten edgier, the movie execs have gotten more prudish in a sense when it comes to female “R” rated girls’ movies.

YP: I never realized there was such a double standard in hollywood when it came to teen movies. It’s almost as if they’re having trouble keeping up with how fast culture is moving now.

YP: If you were to turn it into a movie, which celebrities would you cast?

YP: That sounds like it would be a fascinating mash-up of girls. Most of these girls seem very authentic and comfortable in their skin. Do you think that this is another distinction between this generation and the previous ones?

KS: Yes, exposing vulnerability and insecurity is part of the big trend now. You can’t just go out there pretending everything is okay anymore. Part of it is just letting people know every insecurity, and all the self-doubt which is why I think the Mindy Kaling’s and Lenah Dunham’s, and all the current female comedians are setting this trend.

KS: We’ve spent the 80s / 90’s hiding our flaws, and now we’ve been given permission to let it all hang-out. That’s the arc of the book too, writing over such a long period of time…it has the 80’s / 90’s aspect of “hiding your secret self” but ultimately in the end, it’s resolved with a more contemporary view which is just about: “here I am, I’m not ashamed anymore.”

To purchase Trinkets or learn more go here. To get an update on Kirtsen’s past, current and future projects go here. You can also follow Kirsten on twitter @kiwilovesyou