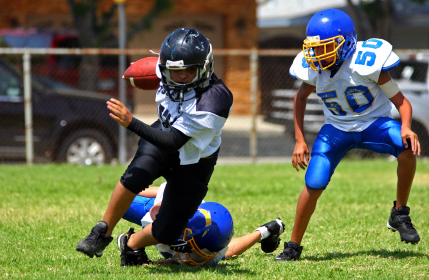 The next generation of sportsmanship is a hot topic that Ypulse is watching closely. The athletic landscape is changing among the younger generation as they grow up in a collaborative, information boom. Today’s post comes from Ypulse’s Chief Operating Officer and avid sportswoman, Tracy Tomasso. Tracy looks at the next generation of athletes but with a twist. Instead of highlighting young rising stars, she reports on the growing concern and recent media attention regarding head injuries on the field. She also takes a look at another rising trend; the growing intensity of helicopter parents and how it may be causing a risk-averse generation.

Recently, President Obama admitted he’d have to think hard about whether he’d let a son play football, amidst growing concerns about the safety of the sport.  With a keen eye on public opinion, the President is echoing the temperament of the nation.  What started in 1985 with the proliferation of “Baby on Board” signs has evolved into a socialized mandate to protect children from any and every potential threat, no matter how obscure or improbable.  Even the great American sport of football can’t escape the gravity of our communal desire to protect our precious offspring.

Being among the parent class, I’ve noticed a recent trend wherein year after year, each successive batch of new parents becomes more protective than the last.  If ‘Baby on Board’ signs are good, ‘Baby-Proofing’ your home is better.  If protecting your child from bullying is good, home-schooling your child to protect them from the vagaries of the playground is better.  With each tragic incident, the media whips up awareness, concern and reaction to the point where, it seems, the only reasonable reaction is to over-react.  It doesn’t matter that there is a 0.08% chance that a non-family member will ever abduct your child, the trailer for the movie ‘Taken’ is more than enough to convince most parents that their kids are safer under house arrest.

But back to football.  Part of the concern may indeed be based on a growing awareness and understanding of the long-term effects of head injuries.  Medical science has linked repeated concussions to Chronic Traumatic Encephalopathy, or C.T.E, a progressive degenerative disease causing memory loss, confusion, impaired judgment, aggression, depression and dementia.  To date, C.T.E. can only be diagnosed posthumously, but a recent study gives some hope to earlier diagnosis and detection.

With that early detection will come the ability to measure how common the disease is among athletes who participate in contact sports like Football and Hockey.  Until there are hard facts, the implied linkage is enough to convince parents to prevent their kids from playing contact sports.

Youth, likely at the encouragement of their (over) protective parents, have been increasingly turning to individual and non-contact sports like gymnastics, tennis, and soccer.   The zeitgeist dissuades risk-taking as the societal pendulum swings to an apogee.  It can’t be long until this parental impulse to protect starts heading back toward the center.

We’re already starting to see the early signs of a more balanced debate.  Jean Twenge questioned whether our extreme focus on our offspring has led to a sense of narcissism in ‘Generation Me’.  Lenore Skenazy, the Manhattanite mom who permitted her 9 year old son to ride the subway unattended, has actively hit the speaking circuit in support of her book Free Range Kids.  Similarly Pamela Druckerman has had the temerity to question whether our singular focus on our children is causing them to develop habits and behaviors that we hadn’t fully intended in Bringing up Bébé.

Maybe I’m less of a parent than the next person, but it seems to me that a balanced viewpoint will serve my family best.  There are and always will be risks.  The question for any parent is, what level of risk is acceptable in the pursuit of a life well lived?