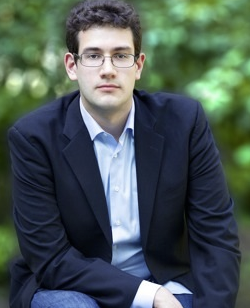 David Burstein, 24, is a Millennial writer, filmmaker, and storyteller. He is the author of Fast Future: How the Millennial Generation is Shaping Our World, the first broad book about the Millennial generation, written by a Millennial. The book takes readers inside the largest generation in history to tell how and why they are changing business, technology, culture, and politics. Ypulse had a chance to sit down with David and get his perspective on how he sees the potential of Millennials and the impact they will have on the future.

Ypulse: Firstly, let’s talk about Fast Future. What exactly is the Fast Future?

David Burstein: The Fast Future is the reality we are all living in right now. It’s a world where so much change happens so fast that we can’t always figure out whether we are living in the future or the present because the line between the two is increasingly blurry. While there has always been change in our world, today the exponential growth of digital technology is producing a series of constant simultaneous revolutions in almost every sector. For other generations, this presents a real challenge, because they have to constantly adapt to this Fast Future world. But for this generation, we’ve come of age understanding the Fast Future as the new normal and it’s allowing us to be incredibly effective agents of change, we simply see opportunities where others don’t. There are many disaffected people in Egypt, but Millennials intuitively saw that they could use technology to power a movement for change so they acted on that idea and toppled their leader.

YP: How do you think large businesses and corporations with hierarchical systems can learn from Millennial business leaders and what strategies would you recommend implementing within their eco-system to attract and retain the next generation of employees?

DB: There have been a number of studies that say a majority of Millennials believe their bosses can learn something from them, which is something that older generations have balked at. But I think there are things that they can learn from Millennials. This generation believes in openness and collaboration, which can run up against the traditional corporate world, and when that happens it produces tension and negative feelings about Millennials by older employees. Every generation of employees brings new perspectives and thinks differently and this generation is no exception. In this time of constant change, it’s especially important for companies to be open to new ideas, allowing their internal workings to be disrupted. Millennials are hardworking, passionate, resourceful, and have the power to be great internal disruptors, but more companies need to give Millennials that chance. It’s a risk for sure, but given that this is the largest generation in history, it’s of great importance for companies to understand this generation, and what better way to do that than to put Millennials in positions that matter. It will help companies gain Millennial consumer loyalty as well as retain Millennial employment.

YP: Your book points out exemplary Millennials who are leaders in business and social entrepreneurship. How is the Millennial perspective on business different from previous generations?

DB: The economic crisis of 2008 and the series of scandals we saw in the early 2000s, (Enron, Tyco, Worldcom, etc) has colored this generation’s view of big business. We’re seeing Millennials’ interest in going into the financial sector and business for pure profit’s sake on the decline. This generation wants their work to be meaningful and they want even the most corporate of jobs to be fulfilling, which is why one of the top questions Millennial prospective employees ask in interviews is about a company’s commitment to social responsibility and service. We’re also seeing Millennials create companies like Facebook, Twitter, and Tumblr which have social goals baked into their company’s missions. That’s a major shift. For a long time people wondered if Bill Gates would ever give any of his money away, and he was hounded about that for years, Mark Zuckerberg gave away $100 million before his company even went public. Philanthropy and social impact are front and center in the minds of this generation of entrepreneurs.

YP: We know there are many misconceptions about this generation but who do you think is getting it right? For example, have you come across any articles, blogs, business leaders, movies, TV shows, books, etc. that you feel accurately depict this generation?

YP: Since you are one of the Millennial voices, let’s talk about why you wrote this book. What was the motivation behind it?

DB: In the lead up to the 2008 election I was touring the country with “18 in ‘08” a documentary film about the importance of young voters that I directed. I was meeting my peers from coast to coast and I noticed there was something special going on— something deeper than just a desire to vote and participate in the election, which we absolutely did in a big way—there was a unique sense of entrepreneurialism and activism that was pervasive. And at the same time all the voices that were speaking about this generation were not from this generation and many of them were giving Millennials quite a bad name. I felt it was important for someone from this generation to tell the story of this generation.

DB: For a long time we’ve thought of pragmatism and idealism as lying on opposite ends of the spectrum, but in this generation we believe that it’s possible to hold both views at the same time, to aim to try and make big idealistic change but we also understand we have to have a plan in order to do that, and we are keenly aware that such a plan involves working with established institutions in our world from businesses to our political system. As pragmatic idealists we recognize the incredible power that businesses can wield and so we’re using our power as consumers to push them to change their practices and move in line with our values on social issues and it’s working.

YP: How do we know this generation is here to stay and make impact? Are they?

DB: During the 1960s, the incredible activism of the Boomer Generation produced the Civil Rights Act and an end to the Vietnam War. When both of those goals, around which their activism was grounded, were accomplished, many Boomers moved on to other pursuits. Much of their activism was done through protesting. But as they proved, that kind of activism is unsustainable. The pragmatic idealistic approach means we can make impact through proactive choices from what clothes we wear to where we shop, and what we eat, as well as more traditional kinds of offline and online activism. Those are all things we can do for our entire life.

YP: In the book you describe Millennials as the most global generation. In what way is this true?

DB: Never before has a generation been so able to be so connected to its global peers than this generation is today. We can literally access information and people from any country in the world with just a few clicks. As a result, we understand that we are part of an interdependent global world and we understand that we have likeminded peers who are working on tackling the same challenges that we are—whether it’s climate change or global human rights—together. What’s more a majority of Millennials expect to spend some significant portion of their lives living or working overseas. We not only understand the world as global, we are living it.

Follow David on twitter @davidburstein and check out his work at www.davidburstein.com. You can also purchase Fast Future here.

Virtual Camps Are The Hottest Marketing Trend of the Summer