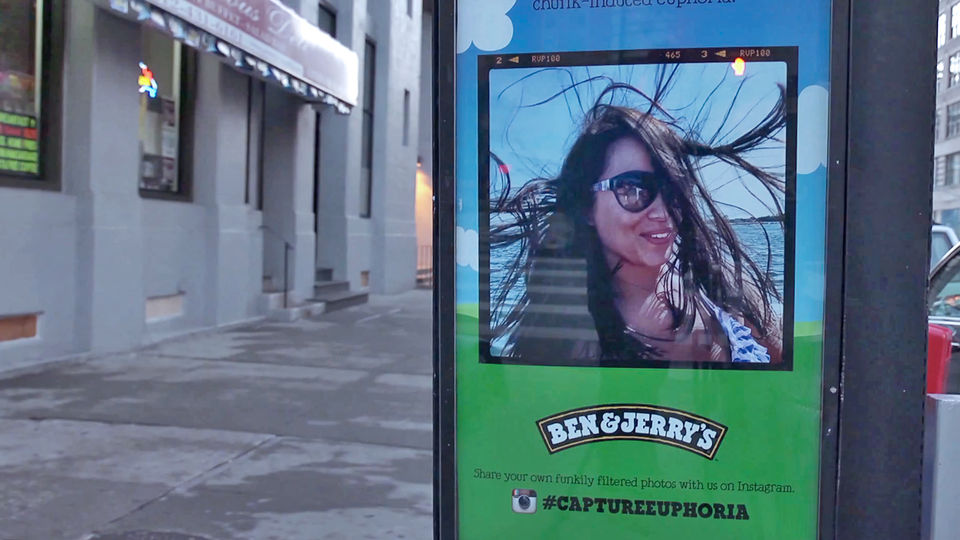 In today’s Facebook, Twitter, Instagram, and YouTube obsessed culture, brands don’t just want to interact with consumers on social media, they want to create meaningful relationships with them. One way of doing this, which is quickly becoming the norm, is by leveraging fans to fame. Consumers are rewarded for their interactions and relationships with a brand by being placed on billboards, buses, in TV spots, and even by appearing in campaigns alongside celebrities!

Ben & Jerry’s for example recently took this approach in its “Capture Euphoria” campaign, where fans were challenged to Instagram pictures that embody euphoric moments. The winning pictures will be featured in Ben & Jerry’s ads in each person’s hometown in print and on outdoor venues. Not only does this campaign tap into Millennial’s existing habits of using Instagram, but it also rewards them with local fame. Everyday people and their photography are celebrated, and the brand creates a bond with consumers.

Dunkin’ Donuts recently made its fans famous on a much larger scale through its “Top of the WorlDD” photo and video contest. Facebook fans were encouraged to share a photo or video of them wishing their family and friends a happy New Year and the winning ones were placed on a billboard in Times Square during New Year’s Eve. Through this approach, fans formed an emotional connection with the company and were made to feel on top of the world!

Skittles has long been a leader in this area, calling on fans to submit wacky pictures which reflect the Skittles brand or the company’s motto to taste the rainbow. Skittles rewards fans through fame each week with its “Greatest Fan in the World” feature on Facebook, a strategy that Dunkin’ Donuts also uses. A fan’s name, crazy photo, and country are posted on the brand’s page, and through this approach, Skittles has formed a community among its consumers.

Perhaps the most memorable example of this marketing tactic is the promotion for Justin Bieber’s perfume “Girlfriend”. Bieber asked fans to create a video of them singing his hit song “Boyfriend,” but with new lyrics about being his “Girlfriend.” They could submit their video to a Tumblr created for this promotional purpose and the best videos were selected to be part of the fragrance commercial on TV. Not only could fans express their creativity (and their love for the Biebs), but they could also achieve fame. One fan, Laina Morris, best known as Overly Attached Girlfriend, went on to become a viral video star and even landed a commercial for Samsung inspired by the clip she made in Bieber’s contest! This campaign exemplifies the power of this approach and how brands can benefit from putting the spotlight on their fans.

We expect this method to take off even more this year, especially as Pepsi announced that it’s crowdsourcing the introduction to Beyonce’s Super Bowl halftime show. Fans are encouraged to upload pictures in specific poses, which will be used in a video to welcome Beyonce on stage. 50 fans will even be invited to be dancers during the show! This tactic is effective since it’s not just crowdsourcing, but rather, a way to give consumers an awesome experience that they wouldn’t have ordinarily and a memory they’ll associate with your brand.