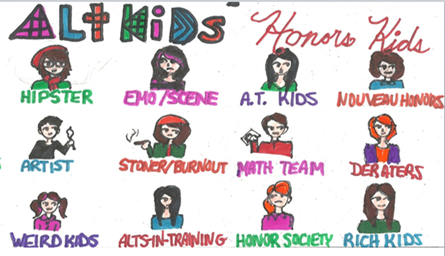 Today’s guest post comes from Alison Hillhouse, VP of Insights Innovation at MTV. Alison and her team recently examined how cliques exist in high school today, where new groups are emerging based on Millennials’ evolving interests and others are interacting or combining where there’s crossovers in culture.

For all the latest Millennial insights and trends, check out the MTV Insights Tumblr and follow @MTVInsights and @Alison222 on Twitter.

Drake wannabees, Japan-o-philes and Asian Gangsters certainly aren’t cliques you would’ve found in high school 20 years ago. And a “nerd” might have been more monolithically caricatured as Screech from Saved by the Bell… instead of today’s breed of nerds that run the gamut from anime players to orch dorks to even “popular nerds.”

While cliques are a timeless high school institution, MTV Insights has found that cliques have morphed to reflect the increasingly diverse, unique and fluid nature of the Millennial generation. We had high schoolers in our nationwide MTV Creative Lab (hosted by Ypulse) diagram their high school cliques. And here’s what we saw….

While some of the clique infrastructure of yesteryear continues to hold true—there are still groupings like “alternative” “nerds” and “popular”—these overarching classifications have splintered into micro-cliques that highlight the unique personas of today’s youth.

At one New Jersey high school, “alt kids” are fragmented into hipsters (“non-conformists”), emo-scene (“depressed hipsters”) and “alts-in-training” (“still deciding which sub clique to belong to”). Honors kids are known for their different academic inclinations, including “nouveau honors” who have just entered the honors scene and are figuring out how to sub-specialize.

Clique diagrammers were also adamant that there were many micro-cliques of nerds, and not surprisingly, 81% of Millennials agree “there are different types of nerds – weird nerds and cool nerds.”

Another high-schooler segmented out her school by where groups sat at lunch hour. She pointed out the nuances in tech types including programmers, gamers and techies… and even fine-sliced “band nerds” and “orch dorks” as distinct cliques (both who lunch together in the Fine Arts Hallway.) 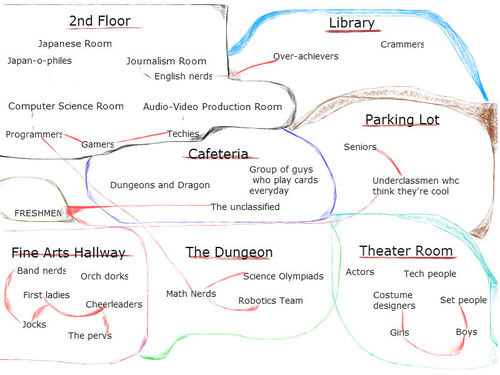 Although cliques have fragmented and specialized, there’s a new fluidity to cliques – 6 in 10 Millennials agree “At my school, it wouldn’t be uncommon for an athlete and a nerd to be friends.” Millennials told stories of cliques coming together for creative collaborations, like “techies” and “rockers” fixing a guitar pedal together.

It’s also desirable to be connected to multiple cliques for diversification and inspiration – 7 in 10 Millennials identify with being a “floater.” DJs are the ultimate “cross-cliquers,” according to many… particularly given that EDM is such a universally appealing music, bringing together jocks, hipsters and “scene” kids.

But it’s not to say high school is one big happy family – clique clashes occur, such as those between “plastic cheerleaders” and “scene girls who side shave their hair.” This elaborate diagram of guy cliques shows both inter-clique fluidity and clashes: 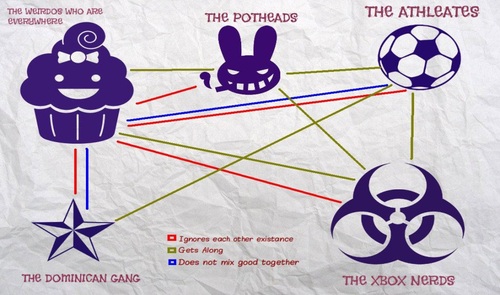 No longer are high schoolers left with just hallway gossip and school functions to get a glimpse into the lives of other cliques – social media offers a 24/7 voyeuristic view into the inner-workings of every clique.

Cliques have an unofficial code of FB posting… of which others are hyper-aware. The artsy kids share poetic thoughts and photos of themselves looking distant and aloof. Popular girls paint an image of a perpetual party, including “highly edited photos that poorly conceal how intoxicated they were” and “photos of themselves in yoga pants plastered to butt, super short shorts.”

And imagine what it’s like now that The Stoners have iPhone access?! Tech has given birth to #highdea and #stonerproblems… and helped spurn the virality of YouTube stoner sensation – Cows & Cows & Cows. Check it out… you’ll be mesmerized for what seems like hours.

And as for the sub-species of “Drake Wannabees” … “he tries to be sensitive and tough, fails at both and is completely self-involved, annoyingly uses ‘YOLO’ and ‘Swag’ any chance he gets.” 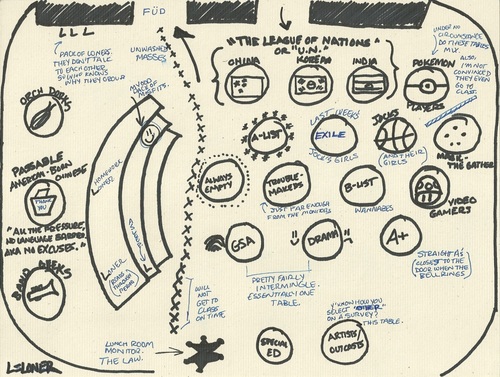