Retro Revival And The Return of “Goosebumps” 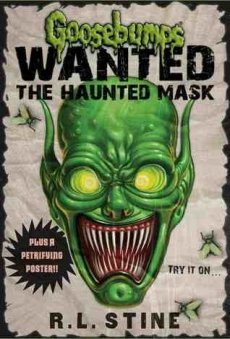 Millennials are nostalgic for the ’90s, which can be seen across all areas of culture today from TV and music to fashion and publishing. The retro trend has taken over in the past year with tons of companies bringing back old styles and hits to a loyal audience who’s missed them. Our YAB member Amanda explains that her generation seeks to re-experience simplier times and feel the comfort that comes with it. She recently read the updated version of “The Haunted Mask” in the “Goosebumps” series — which turns 20 this year! — and explains how the revamped book, like other things in culture, has old charm but with a modern twist.

Retro Revival And The Return of “Goosebumps”

I remember being in third grade and eyeing “The Haunted Mask,” a book in the “Goosebumps” series by R.L. Stine on my school’s library display. I had no idea what the series was about then, but I was already curious after looking at the book’s cover which featured a kid wearing a frightening mask. When I picked up the book, I saw that it was older than me and was worn out — its pages were falling out, the spine was coming apart, and the cover had cracks. Right then, I knew that “The Haunted Mask” had to be popular with kids at my school if they were reading this book — and the others in the series — to pieces.

“Goosebumps” had characters around my age who were unfortunate stars of a horror story which happened to have a mix of humour in it too. As far as I can remember, “Goosebumps” was one of the series that I would stay up late at night reading because I was interested in finishing each book (and was also too scared to go to bed afterwards).

Now fast-forward twelve years later. I still wonder if that very book has been torn to pieces and replaced by a newer version only to be read by younger students at my school today. After all, past popular series like “The Baby-Sitters Club” and “Goosebumps” have resurfaced and are on displays at bookstores and libraries again. I’m not surprised by this because the ’90s are back in style and it has inevitably influenced the publishing industry too.

Out of all of the trends among Gen Y lately, it’s safe to say that one of the strongest ones is retro. The ’80s came back a few years ago and now the ’90s have followed suit in giving us our nostalgic fix after it was finally declared vintage. Even though the majority of Millennials were born during the ’90s, we still have memories of the late part of the decade, such as playing with our old-school Super Nintendo, being obsessed with Pokémon, wearing overalls, and surfing the internet via Windows 98. As for the early years where we can barely recall anything, bringing back the ’90s as a whole is a way for my generation to discover where our roots started.

Both the entertainment and fashion industries have acknowledged my generation’s interest in going retro. Within the last year, television channels like Nickelodeon noticed how much Millennials missed ’90s programming and it created “The ’90s Are All That,” a programming block with past popular shows like “Clarissa Explains It All” and “All That.” ’90s pop culture staples like Sassy magazine are also influencing today’s style, as the mix of floral, grunge, and androgynous clothing can be seen in stores like Forever 21, ASOS.com, and Urban Outfitters. That being said, the interest in both the pop culture and fashion of the ’90s is helping Gen Y get more in touch with the era.

Finally, the publishing industry has caught on with bringing in the ’90s, which is why the “Goosebumps” series brought back “The Haunted Mask” for its Wanted sub-series. So when I had the opportunity to read another “Goosebumps” book recently, I couldn’t pass it up. Having a tendency to be nostalgic at times, I was pining to relive the time when I was a kid and was obsessed with the original book from the series.

In the original story, our protagonist experiences the fear of putting on a Halloween mask and not being able to take it off as it becomes her face. In the newest version of the story, “The Haunted Mask” is back to terrorize more kids’ lives. However, this time, the Wanted version has two stories and two protagonists. Our protagonists are Lu-Ann, a girl who is bored with the typical Halloween shenanigans and is looking for a scare, and her friend Devin, a boy who is spending his Halloween on a pumpkin patch. Although both friends are spending their night in different locations, their stories intertwine, and clash in the end.

Even though the revived story has kept its novel “Goosebumps” charm, it seemed like the humour and horror has been updated to today’s standards, which is more of a darker comedy mixed with horror/thriller. Personally, I think it’s a great way for younger readers to get a taste of the series that ruled in the ’90s, but with the stories taking place in present day. Who knows, maybe with the help of bringing back the ’90s, some kids will find this new version of the book already worn out and well-read in their school library, just like I did with the first one.

Hailing from Canada, Amanda has been a Youth Advisory Board member at Ypulse for over three years now. She enjoys reading, writing, watching films, and being a volunteer for Mindyourmind.ca and a street team member for MTV’s A Thin Line. What she does not like, however, is writing about herself in third person.