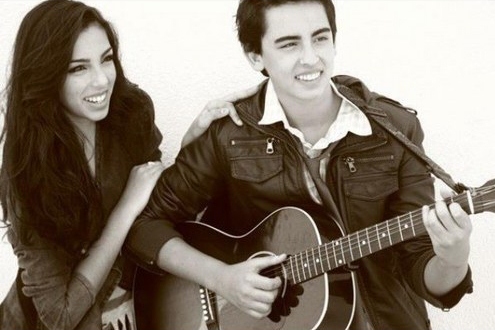 After hearing the catchy hit song “All the Runaways” by brother/sister singing sensation Brandon and Savannah Hudson, we were instantly hooked. The duo, who are surprisingly only 13 (Savannah) and 15 (Brandon) years old, have quickly risen to fame after uploading a video on YouTube of them singing together and the overwhelming response led them to record together professionally. But they aren’t stars who’ve entered the spotlight overnight. The impressive teens have been singing for years, they write their own music, play lots of instruments, and even directed their own music video featuring all of their friends.

Brandon and Savannah just kicked off their Camplified Tour last week. Before traveling the east coast to perform for thousands of campers, they chatted with us about how they got started in the music business, what it’s like working with their sibling, and how they have a unique style of music that’s not limited to one genre. And with lots of new songs coming out in the next few months (we got a preview!), a second tour with boy band Midnight Red, and a reality show in the works, Brandon and Savannah are performers to know!

Ypulse: How did you guys get started in the music business?

Savannah: Well ever since I was little, about 4 or 5, I would just stand on chairs and tables and sing whatever.

Brandon: Yeah, she would sing Broadway tunes at a young age and then when I was seven I wrote my first love ballad, which is kind of weird. My parents thought I was a strange kid. They were like “we’re going to need to take him to therapy.”

Savannah: Yeah I was really inspired by Brandon as a musician and I wanted to write too and we started collaborating and writing together.

Brandon: And then we just started practicing and people seemed to like us performing together more than separately. Ever since then we have been working at it and that’s how we are here today.

YP: That’s so cool! You guys really got your start professionally by uploading a video to YouTube of you singing, right?

Savannah: Yup, it was a Lady Antebellum song.

Brandon: It was “I Need You Now.” I think it was the first time anyone had really seen us perform together and we got 500,000 views or something like that.

Ypulse: So would you say that YouTube propelled you guys?

Brandon: It did for sure and ever since then we have just been performing and writing more together and we started working harder at it. And then we did “All The Runaways.” That video was a blast! It was all of our friends in the video.

Savannah: So it was an actual party.

Brandon: We didn’t get to have a birthday party that year so that was kind of like our party! It was awesome!

YP: Wow, was the concept your idea and then you included all your friends?

Savannah: We were in Nashville when we were writing it and we missed LA and we wanted to be there. We were thinking about the sun and the lights and we came up with the concept of everyone getting together just to have fun and enjoy a party.

Brandon: No matter who you are and where you come from, everyone can get together and have a good time. That was the main concept and the video emulates that.

YP: Besides YouTube, how else do you guys engage with fans?

Savannah: Well we have been in LA performing at a whole bunch of spaces, which is really great because people are from everywhere. People spread the music to their hometowns and that is also what we are planning on doing on our next tour for Camplified. People come from all over, so they will share our music and it will be a great experience performing!

Brandon: And also iTunes of course is a great way to boost our music. Once the video for “All the Runaways” came out we put the song on iTunes and that has been doing well on the charts. Our song is also now on the radio so we are pumped about that. It’s a crazy surreal feeling to hear yourself on the radio.

YP: That’s cool! Can you tell us more about the Camplified Tour?

Brandon: It’s 15 dates and there are going to be 15,000 kids; it’s just crazy! We are really excited! We have a really great show and we are debuting brand new music and also debuting merchandise.

YP: That’s great, we really can’t wait to hear all about it! So what’s it like working with your sibling?

Savannah: It’s great! We cut each other off — let me talk Brandon — I am just kidding. Working together is mostly amazing but we have our times.

Brandon: Obviously, we are brother and sister so we do bump heads now and then but in the end we get along.

Savannah: He finishes my sentences and I know I have him when I perform. He is always there for me and it goes both ways.

Brandon: Yeah, we have each other’s back. We argue the most and bump heads during song writing.

YP: What’s the process like when you’re writing music?

Savannah: Our songs are mostly all about real life experiences. They can be about relationships — not just with a boy or a girl but with our friends or family, or it can be about the places we miss. We like to touch other people and write about things that they can relate to.

Brandon: And the process usually starts with a guitar hook or guitar rift that I come up with and then we just feed off of that and take turns and just come up with different ideas.

YP: So what’s next in your trajectory of releasing music?

Savannah: On our tour we are going to perform a whole bunch of new songs and then from there we are going to pick some of the kids’ favorites and put them on iTunes and maybe give away some CDs with our songs on them.

YP: Speaking of performing, you guys opened for the boy band Midnight Red and you’re going to be touring with them again soon, right?

Brandon: Yeah, we’re going all over wherever they go. It’s going to be a blast. They are blowing up really fast and they have a huge following and basically since we have been with them, we have kind of been getting a huge following as well. So we are excited to meet new fans and perform with them because not only are they really cool performers, but they are really cool guys too!

YP: What do you guys think about all the boy bands in the music space today?

Brandon: Its cool! I mean it’s not my thing — you know I am not a girl.

Brandon: I think they are different, that’s why I’m excited!

YP: Who are some of your musical influences?

Right now, in today’s music, I like Foster the People and Taylor Swift. I think she has amazing talent writing wise and she is really great!

Brandon: When I first started writing I really looked up to The Beatles and Elvis Presley for sure because my Dad got me hooked on classic rock, and that is kind of where I got my start writing. And now there are a lot of great artists who are great song writers — Frank Ocean, Foster the People, a lot of indie artists, so we have a bunch of influences. Also, John Mayer as a songwriter and guitarist.

YP: What’s the best part about being performers?

Savannah: The best part to us is reaching fans.

Brandon: We love seeing their reactions to our music. I mean we have been doing this since we were kids and seeing people love our music and sing our words and take a song and buy it and listen to it, it’s a really crazy thing.

Savannah: You totally just copied my answer, I was just about to say that!

Brandon: Our music is close to our hearts. We’re the ones who write it, so when people listen to it and enjoy it, it’s really cool.

YP: Can we talk about the style of your music — you guys describe your sound as acoustic pop, right?

Savannah: Our song “All the Runaways” is pretty poppy, but it has something different in it. Most of our music, which will be on our EP, is not that same old poppy sound because we don’t want to just be the same as everyone else.

Brandon: And it’s different, especially because we look up to some of the industry’s different artists and we kind of incorporate those different sounds and styles into our music. It’s going to be cool, I am excited for everyone to hear the rest of our album.

YP: We also hear that you guys are going to be on an upcoming reality show. Can you tell us more about that?

Savannah: It’s on the down low, we can’t really talk much about it but it’s going to be cool and it’s kind of about the rising of our careers

Brandon: And our parents being our managers and that’s really all we can say…

Savannah: Let’s just say we take our crazy to the next level!

Brandon: Well it has taken us a long time to do this…we want to show people that this isn’t something that happened overnight. We have been working on this since we were seven and five. And it’s been a long journey and we are really excited that people are starting to recognize the music, and our writing is maturing as we are as well. We have been to a lot of places and seen a lot of things, so we are well traveled and mature, but when we are with friends our age, we do act like 15 and 13 year olds. But when it comes to business we take it seriously because this is our life and we are very serious.

YP: How do you guys spend your time when you aren’t working?

Savannah: Hanging with friends since we don’t get to do that a lot.

Brandon: We write songs a lot of the time too.

YP: Is there anything else you guys want fans to know?

Savannah and Brandon: Yeah to visit our website — brandonandsavannah.com

Brandon: It has photos, information, tour dates, new music, etc. Also @Brandonsav is our Twitter and check out our Facebook page. Everyone just look out for the new music. We want to touch people and see what everyone thinks about it!

Check out their first single, “All the Runaways” below!