Millennials And Social Media: Highlights From The State Of Now Conference 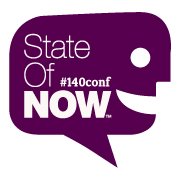 We tuned in to the State Of Now Conference (aka the #140conf) to check out what’s going on in new media and came away with so much insight into how Millennials are engaging on these platforms that we had to share what we learned with you. Here are some highlights on where technology is heading and how social media is impacting TV, education, branding, and music.

Robert Stephens (@rstephens), founder of Geek Squad, shared what he believes is the next evolution in technology — the anti-social consumer. In the past decade, technology brought consumers together so that they could interact, share, and discuss on social media, but in terms of business interactions, they’d rather be anti-social. They would choose automation over personal contact, so long as automation works.

What he’s found though is that automation is on the cusp of working well. He explained that when he types his handle into his iPhone, it always changes “rstephens” into “estrogens.” It hasn’t learned his name. In the information hierarchy, he explained that doing something once is a hint, twice is pattern, and three times is a preference. If apps could listen, they could turn automation into anticipation. If a map app could see that traffic is bad on a highway and a calendar app knew that you had a meeting coming up in that direction, it could alert you to leave a bit earlier.

He predicts that we’ll give up a degree of privacy for preferency (and we tend to agree considering how freely Millennials share information online) to make our automated lives more efficient.

The Future Of Social TV

Caroline Giegerich (@dailymarauder, Editor of Daily Marauder) spoke with Ian Schafer (@ischafer, CEO of Deep Focus) and Rishi Malhotra (@rishimalhotra, Managing Partner of [212]Media) about the evolution of social TV. Although TV manufacturers are creating split screen TVs that allow for the show to play on one half and a Twitter feed on the other, they don’t see these taking off. The beauty of the second screen is that it’s private, in the hands of the viewer. It’s a one-to-one conversation that becomes a one-to-many conversation when broadcast in that way. Social TV makes the biggest difference with live TV — sports and award shows — allowing for real time back and forth. The audience feels a part of the outcome.

The Grammys were a significant event this year, immediately following Whitney Houston’s death, and many tuned in to see what the show would do in tribute. However, it’s delayed on the West Coast, so those who were following on Twitter knew what had happened before they had a chance to see it. We’ll see the same phenomenon with the Olympics this year with live streaming. Time zones will collapse as athlete stories and event news takes over feeds.

So what’s the right way to go about social TV? The prevailing idea is the hashtag as a measure of engagement; you can’t game the system of followers and retweets. It’s content and authorship driven. Social check-ins are incentivized and are the lowest barrier of entry. It doesn’t require thoughtful commentary, just a click. But tweets become additional content.

Isaac Budmen (@ibudmen) is a Syracuse University student who earned the right to address the crowd at the conference through the #140cuse student competition. Social media has changed his life — not ruined it as media would like to suggest. He and a friend were online one day in class when his professor yelled at them to stop spending time on the Internet because no one gets a job on the Internet. Just to prove him wrong, they started tweeting with the hashtag #IGotMyJobOnTheInternet, which quickly turned into a nationwide conversation.

Like many Millennials, Budmen’s idol is a tech entrepreneur, Dennis Crowley, the co-founder of Foursquare. On a recent trip to New York, he went through all the proper channels to try to set up a meeting with him, with no luck. Finally, he turned to Twitter and landed the meeting of his dreams, that soon turned into a mentorship. Crowley’s advice to Budmen and his friends was to build — to start immediately, to create projects for themselves, and to build often.

They took the advice to heart, starting their own company, building everything from Twitter drinking games to check-in gumball dispensers. In the process he’s learned new skills that his traditional education wouldn’t have taught him. The real-time Web allows him (and the millions of Millennials like him) to start from having zero knowledge to set goals, get feedback on their goals, and meet goals.

What We Can Learn From Sneakerheads About Social Media

Dylan and Jake Pulver, co-founders of Solecamp.com, sat down with Jeff Staple (@jeffstaple, founder of Staple Design and Reed Space) and Ronnie Fieg (@ronniefieg, founder of Kith NYC) to talk about how social media plays a role in brand communications. The rise of social media has been a double edged sword for the footwear industry. It used to be an archeological dig to find a coveted shoe, but now you can get it instantly with just a click. The end result is that the shoe becomes much less of a treasure.

Social media has exploded, so much so that there’s almost too much information out there for a brand to be noticed. In the morning, the post may be on the first page of a blog, but by the afternoon, it’s on page four. Businesses are using it to help push products. In the beginning, blogs were more influential. They’re still important, but now they’re having less of an impact because of the amount they’re putting out. It’s important to capitalize on social and digital media, but it’s also key to have a physical space from the beginning to build a connection with fans from the ground level. Print media is gaining a bit of traction again in the past three or four years because people want something of substance, something more tangible.

Looking at the social sites that are rising, like Instagram, it’s about the easiest interaction. You take a photo and post it. You like it. It doesn’t take an effort to craft a response anymore. Not that people would read it anyway. Staple and Fieg both post about products they’re releasing with a note about when it will come out, and inevitably half of the comments on the post ask when the item will be available.

Whether a brand is on blogs, Facebook, Twitter, or other social media, ultimately, it’s the message that matters. If there’s no substance to what is being said, the medium doesn’t matter. There’s no amount of money and no social media expert that can save a business if it doesn’t have something worth sharing to begin with.

Music In The Age Of The Reality Star

Leslie Hall (@dollyhall, president of ICED Media) sat down with Sandy Lal (@sandylal of Universal Music Group), Dash (@Dash, music artist), and Charlamagne Tha God (@cthagod, radio personality at Power 105) to talk about the importance of social media in music. As social media and reality TV have risen in prominence, is it more important to have a strong personality or incredible talent? Talent is king, but record making is a toll to get fans to buy into the artist and his or her personality. A song dangling out there isn’t the end goal — the goal is for the song to connect with a person to create a real fan who wants to follow the artist on social media, watch them perform, buy a concert tee.

For labels, it’s easier to evaluate artists than ever before. Not only can they follow a link and listen to evaluate the music, they can also look at their viral properties, such as YouTube and Twitter, to see what their following is like, if they’re doing shows, if they’re connecting with fans. The label can see if people really care about them.

Artists are now in control of their own social platforms and promotion; it’s up to them to be continuously online. It’s not effortless. Artists usually want to “zone out and create,” according to Dash, but they also have to remember to update their fans and tell them about what they’re doing. Michael Jackson would talk about the mystery of the artist, having to be an elusive person that everyone would want to know more about; now fans want to know everything. As Dash put it, they even care about what you’re eating, so you tweet a photo of your meal!

While social media has made it easier than ever to establish a celebrity brand based on a personality (with or without much talent), to have longevity, you have to have both personality and talent. It’s their talent that makes us want to buy a record. People won’t buy a record just because they like you, they have to like your music. Lal summed up explaining that “First and foremost, it’s talent. If you have that, get your hustle on.”