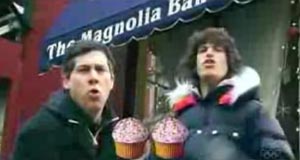 This weekend marked a major milestone for “SNL,” airing its 100th Digital Short. To put that in perspective, consider how online video has progressed in that time and the role “SNL’s” Digital Shorts have played.

The first Digital Short (“Lettuce”) aired in December 2005. That’s just 10 months after YouTube was founded and right after the site came out of beta. It was funny, but just two weeks later, Andy Samberg and his Lonely Island crew hit the ball out of the park with the second Digital Short, “Lazy Sunday,” which immediately went viral racking up millions of views.

It wasn’t just a cultural moment, it changed everything. In many ways, it put YouTube on the map — people shared the link of the video far and wide, and those who thought they had no reason to check out the video clip site suddenly found themselves “channel surfing” online. A few media analysts even credited the wild success of the video with influencing the unexpectedly high-price Google paid for YouTube ($1.65 billion) later in 2006.

The first Digital Shorts were purposefully shot with basic, consumer-grade video equipment, and fans immediately uploaded to YouTube. They spawned parodies that were easily made to look like the original — after all, they were shot with similar equipment.

It wasn’t long before celebrities including Natalie Portman, Jon Hamm, and Justin Timberlake started popping up in the low-budget shoots to poke fun at themselves and other pop culture phenomena. Granted, the videos were tied to “SNL,” but stars were willing to be ridiculous in widely-viewed “homemade” videos thanks to a rise in sharing via social sites and online video viewing.

With such compelling content driving them to sites like YouTube, people began to spend time exploring online video, discovering new stars and content creators whose imagination and creativity weren’t stifled by executives worried about what customers or advertisers would think. It lead them to find people like Justin Bieber, who was one of the stars of the 100th Digital Short. With “low-quality” video making its way to TV, doubters stopped questioning why people would want to spend time on YouTube watching low-quality consumer-generated video. They realized, if it was entertaining, they’d watch.

The Shorts were spawned from a network show (one that’s edgier than most), but they also embodied the spirit that anyone can be a filmmaker and a comedian. Not only were the first videos uploaded to YouTube for free  (until NBC Universal claimed copyright infringement) and promoted willingly by fans, but also the equipment used to create them was within the budget of most Americans, and they were shot in neighborhood locations. The barriers to enter stardom had never been so low. Couple that with Millennials’ skills of self-promotion and their willingness to openly share their lives and their work online, and it was only a matter of time before today’s TV stars were being plucked from YouTube.