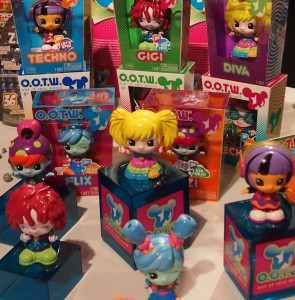 We were at the Time To Play toy showcase yesterday to keep an eye on the trends coming this spring and summer — and to have a little fun letting our inner child come out to play.

As usual, toy makers are putting out toys that are travel-friendly for summer holidays — including Crayola’s fold-and-go Dry Erase Activity Mat and Mattel’s WWE Money In The Bank play set that all folds up into a briefcase (like the one that hangs in the center of the ring for that event). There were also plenty of toys that take advantage of the heat — including Little Kids’ Limbo sprinkler set and the Nerf Supersoaker with the largest water capacity ever.

Amid all that, however, were some new trends we’ve been keeping our eyes on:

Blip Toys actually spoke those very words — low-tech meets high-tech — when we stopped by to check out its new line of Out Of This World dolls. The characters — which include a DJ, a Hollywood diva, and a bubbly jokester — and their stories borrow from texting lingo. Each also comes with a QR codes to scan and read stories about characters on a mobile phone, extending offline play online.

Wish Factory’s i-Poppin’ Necklaces also take a low-tech item, a necklace, and adds a high-tech twist making it double as retractable headphones. The charm on the necklace — in the shape of hearts, stars, skulls, and more — conceal the wires until they’re needed.

3D has been hot in movies, but not so much in sidewalk chalk…until now. Crayola’s Kaleidoscope 3D Sidewalk Chalk set comes with glasses with special lenses to produce the two effects when looking at the chalk designs. 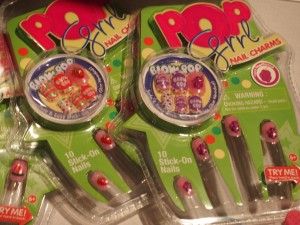 Wish Factory’s Pop Grrl line also includes Pop Nails, a nail art line of press-on and DIY nails that lets younger girls take advantage of a trend we’ve been seeing with teens and 20-somethings. Some of those older girls would also love to get their hands on the pop-art designs that include scented sets based on candy brands like Tootsie Rolls and Blow Pops.

Spin Master’s La Dee Da dolls may be New York City fashionista, but they’re also resourceful, turning random items into wardrobe essentials. They put their own spin on their outfits, and each doll comes with instructions to inspire girls to take everyday items they have at home and “upcycle” them into new pieces to wear. 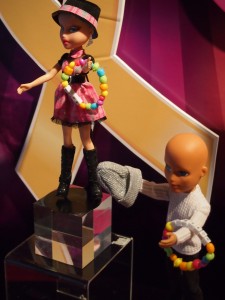 One of our favorite new lines we saw were the True Hope Bratz and Moxie Girlz dolls from MGA that are designed to provide emotional support for kids fighting cancer. The dolls are all completely hairless — they don’t even have eyebrows. After Mattel initially turned down Jane Bingham’s plea for a bald Barbie, MGA decided to move forward with the idea in its own lines, producing both bald boy and girl dolls. They come with bracelets, like the ones children receive when undergoing treatment, with each bead representing another treatment session completed, but they don’t come with wigs because the point is to remind them that they don’t need hair to be beautiful. With the sale of each doll, MGA is donating $1 to the City of Hope for cancer research.

This trend may be more important to parents than to kids, but we saw it frequently. With the plethora of toys that kids have, play rooms and cars quickly get cluttered with plastic parts. Crayola is introducing a Color Wonder roll that is designed to fit in the cup holder of a car. What’s more, the markers are neatly stored in the center and the coloring pages can be torn off and stuck to the car window for coloring and “display.”

At home, Mattel and Warner Bros. Consumer Products are doing their part to keep toys tidy and off the floor. Mattel’s Hot Wheels tracks clip to any table surface, putting them at just the right height for little kids and keeping them out of the middle of the floor. WB’s The Dark Knight Rising Wall Tracks uses 3M’s Command Strips to stick the Hot Wheels track to the wall, giving more space for building while keeping the floor clear.

We’ve seen a lot of retro toys make their way back on to shelves, but we’ve not been as excited about any as the reintroduction of the Big Wheel bike! Kids Only is bringing the classic back in its original colors, and we can’t wait to hear the sound of plastic on pavement again as kids peel out and drift in their Big Wheels. 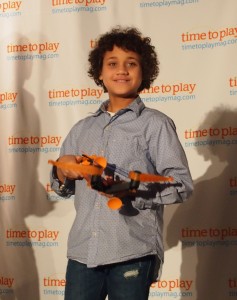 “The Hunger Games” is having a widespread effect on youth culture that has filtered into toys, with boys and girls wanting to be able to (safely) shoot like Katniss. Zing’s crossbow and target are sure to be a big hit. Easy to wield and aim, kids will be pleased with their ability to hit the target.

Disney’s “Brave” also features a bow-and-arrow-toting heroine, Merida. As with “The Hunger Games,” Merida’s archery skills play a key part in the film. Jakks Pacific is producing a “Brave” branded bow and arrow set, which is certainly a different take on traditional princess role play. While parents may have some concerns about putting a “weapon” in their kids’ hands, less dangerous toy versions may make everybody happy.