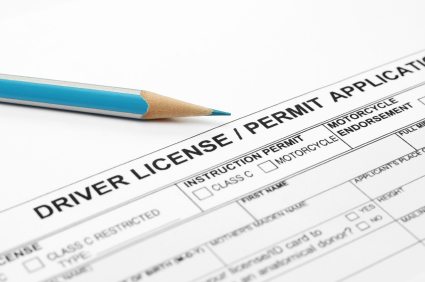 We’ve been seeing plenty of headlines this week about how Millennials don’t like cars and don’t want to drive. The auto industry is sweating because Millennials aren’t buying cars at the same rate that Boomers did in their youth, citing their preference for technology and the Internet over cars. The ultimate question is whether this shift is driven by a new mindset about driving (which will likely not change) or economic conditions (which will likely change). Of course, there’s a possibility that it’s both.

Millennials do bring unique attitudes and a different cultural mindset to vehicles, but the fact is, they still drive. But an article in The New York Times cites stats including:

“In 2008, 46.3 percent of potential drivers 19 years old and younger had drivers’ licenses, compared with 64.4 percent in 1998, according to the Federal Highway Administration.”

“Forty-six percent of drivers aged 18 to 24 said they would choose Internet access over owning a car, according to the research firm Gartner.”

What it fails to note, however, is that new laws restricting licenses for drivers under age 18 took effect during the decade reference, reducing the number of fully licensed teen drivers. As for the 46% of 18-24 year olds who would choose the Internet over driving, that doesn’t reflect the number that would like to do both. What’s more, that figure also means a majority of 18-24 year olds (54%) would choose a car over a computer.

An article in The Atlantic says:

“Growing up in the ‘burbs was part of the reason driving was so central to Baby Boomers’ lives. Car keys meant freedom. To city dwellers, they mean struggling to find an empty parking spot.”

“Surveys have found that 88 percent [of Millennials] want to live in an urban environment.”

Urban living is indeed on the rise as young people head toward cities in the hopes of finding jobs. And while a large number of Millennials would like to live in urban areas, the fact is that only 28% of 16-20 year olds actually live in a big city, according to the Census’s Current Population Survey (February 2012).

Ypulse recently surveyed more than 1,200 Millennials about their attitudes toward cars, driver licenses, and getting around town. While they aren’t thrilled that they have to stay off their phones and can’t visit social networks while driving, they place more value on the freedom a car brings. 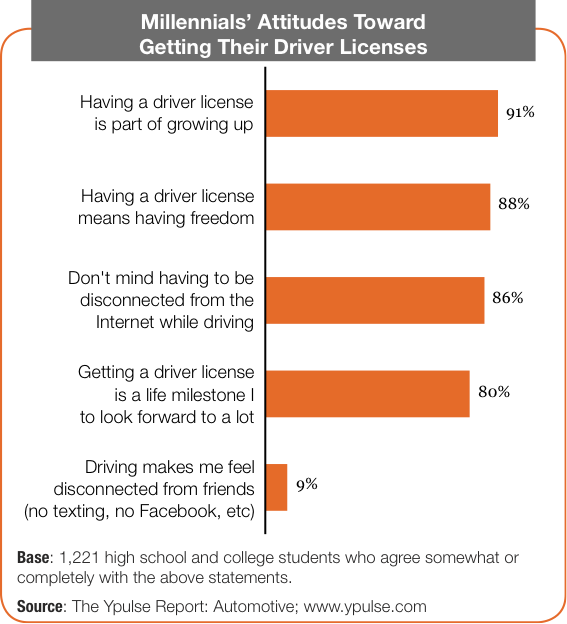 Our study found that 70% of Millennials drive on a typical weekday. They consider driving the most comfortable, convenient, and practical form of transportation they use. They also think it’s fun and cool. While they consider walking, biking, and taking public transportation more affordable than driving, each has drawbacks. They don’t think of biking as very safe, though it has become cool to ride. Public transportation has a poor image; it’s not very available, easy, convenient, or cool, and students consider it restricting. Walking may be a smart, healthy transportation option, but it’s not always feasible.

The Atlantic and The Times are correct that the culture around cars has changed. A car still represents freedom, but now it also represents a huge responsibility. Millennials are willing to deal with that bittersweet compromise because the benefit of driving far outweighs the negatives of cost and having to be offline while driving. Young people still see getting their license and driving as an exciting rite of passage (see chart), but the car itself is a commodity. Unlike having the latest, coolest cell phone or tech gadget, they don’t care as much about what car they drive, so long as it serves their needs, which involves a lot more than getting them from place to place.

To Millennials, cars are personal spaces; that’s particularly true among high schoolers, who see them as an extension of their bedroom and a place to escape their parents. Some 58% of high schoolers (and 47% of Millennials overall) think of their cars as a place to hang out with friends. They use their vehicles as places to do homework, grab a quick bite between classes, and to simply relax. Only 30% of Millennials say their cars are just vehicles that get them from place to place, serving no other purpose. While many Millennials say any old car will do for their needs, that doesn’t mean they wouldn’t like to see cars redesigned to reflect their always-on, busy lifestyles.

So far, the auto industry hasn’t given Millennials a compelling enough reason to buy new cars. They’d rather spend their money on entertainment or technology than spending extra (on top of the cost of a used car) to get a new car. To correct The Times, which says “many young consumers today just do not care that much about cars,” the reality is that they don’t care that much about new cars.