Are Young Europeans Participating in Veganuary? 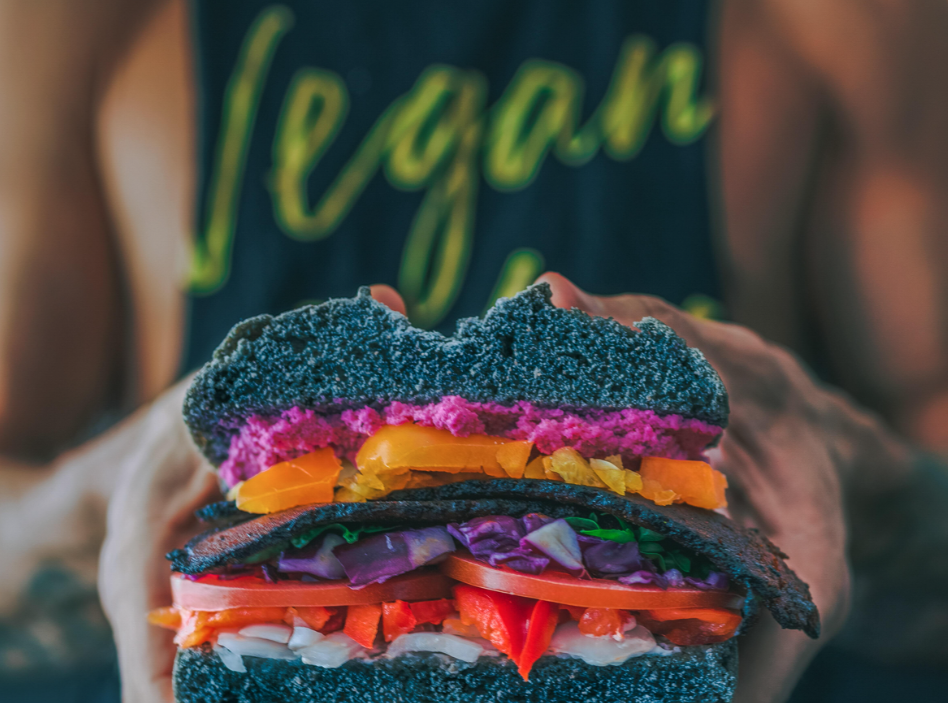 Brands are going all in on Veganuary in Western Europe this month—but are young consumers actually participating?

Veganuary started a few years ago in the U.K. with the aim to challenge people to cut out meat and become vegan for the month of January. The movement is led by the British Veganuary charity and has been growing in popularity among young consumers in Western Europe over the years. It is now a global event, with people from across the world participating in the challenge—and with Billie Eilish being last year’s ambassador for the cause, the movement got cooler, too. In Western Europe, brands have been using the month to launch new vegan products, and publicize their meat-free efforts. Starbucks launched five new vegan menu items this Jan, including a plant-based breakfast wrap, and Subway added a new plant-based “steak” sub to their offerings, just to name a few.

While Veganuary doesn’t tell the whole story about young consumers’ relationship with veganism, it is clearly being used by brands who want to appeal to young Europeans’ dietary habits. And though experts are saying Veganuary could be a big opportunity for food businesses, YPulse’s data indicates that the event might not be as popular as headlines are making it out to be. YPulse has surveyed young Europeans the past two years to find out how they participate in Veganuary, and the number who say they would be actually decreased this year: 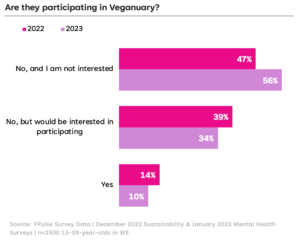 Young Europeans are less interested in Veganuary this year

Just 10% of young Europeans say they are participating in Veganuary this year, compared to 14% of 13-39-year-olds in 2022. And it’s more than that: the number who say they’re not interested in participating at all increased significantly, from 47% last year to 56% this year.

This certainly marks a dip in the popularity of the event, which by all other reports has been growing significantly over the years. In 2021, following a year when plant-based eating was accelerated among young eaters, Adweek reported that Veganuary was “growing rapidly” with brands like Costco, Yelp, Robeks, Albertsons, and Nestle, as well as vegan influencer Tabitha Brown, on board. The nonprofit organization behind the program created a marketing campaign featuring Brown and reported 80K Americans signing up—nearly a 50% jump from 2020—and topped 500K sign-ups globally for the year.

Veganism is not yet prevalent in Western Europe

Of course, Veganuary isn’t reserved for vegans, as it’s intended to be a trial period of veganism for the vegan-curious. Anyone can participate, so is there something else that is impacting overall interest this year?

YPulse has reported consistently that when it comes to making buying decisions, Gen Z and Millennials are the pragmatic generations, whose choices are essentially guided by pricing as much as what they like. In our trend report The End of Foodie Culture (As We Know It), YPulse found that only 15% of young Europeans consider “dietary options” when choosing a place to eat. By comparison, more than three in five Gen Z and Millennials answered, “how good it tastes,” and “price” as their top considerations when eating out.

This pragmatic attitude to shopping has been intensified with the cost-of-living crisis and inflation that unraveled across the region in the last year. As consumers were driven by their wallet, they are simply looking for cheaper food options. For example, high-end supermarket chain Waitrose revealed an interesting stat last October: consumers are increasingly turning to canned food in their quest to save the pennies. And of all canned products, spam and fish heads are getting the most interest, with sales for both increasing by a third. With the price of basic products in supermarkets going up, young people have to make choices about how they spend their money, and they might not opt for a 100% vegan diet, considering that vegan products are still more expensive than fish / meat. Brands can have a hard time understanding young consumers’ purchasing behavior, especially when they buy clashes with their values, but our Western Europe Cause Conundrum Report revealed that young people don’t always have the economic power to match their eco-ambitions.

Young Europeans overall are participating less in Veganuary this year, but looking at the difference per generation shows that not all generations are totally disinterested: 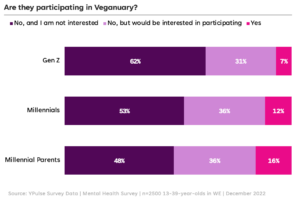 It might surprise some that European Gen Z is the least interested generation in Veganuary, with more than three in five respondents saying they don’t participate, and are not interested in participating. But surveying Millennial parents gives us an insight into how Gen Alpha—which YPulse defines as children born since 2020—might be participating in Veganuary through their parents. Almost one in six Millennial parents say they’ll be participating in Veganuary, compared to only 7% of Gen Z. Millennials parents in Western Europe seem to use Veganuary as an opportunity to explore veganism with their little ones, and so, despite a current dip in Veganuary, Gen Alpha could end up becoming the most vegan-friendly generation of all.