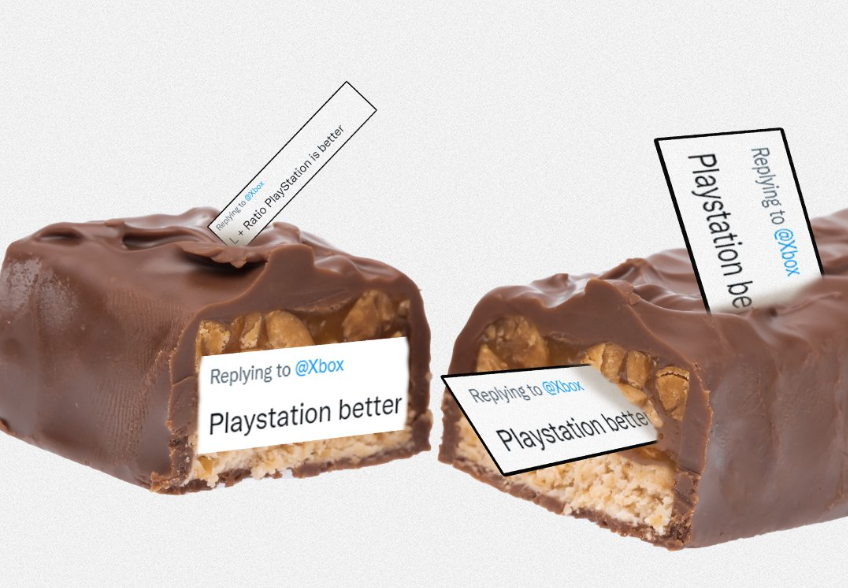 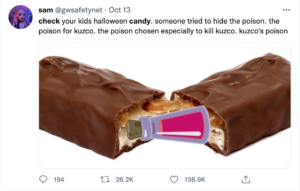 Check your child’s Halloween candy, there might be a meme in it

Every year, parents (or at least the news) worry about finding something nefarious in their child’s Halloween candy. Concerns about finding needles and razors in chocolate bars, or children being given drugs that look like candy started back in the ‘70s and have popped up every few years since. But because the hype around these extreme incidents is known to be bigger than the actual threat of them, Twitter has taken to making a meme of what might be hidden in candy this year—and even brands are in on it.

Users have edited all kinds of things into candy bars, from real to metaphorical, and are urging parents to watch out for them diligently. Xbox found troll posts, a Wildlife Conservation department found an invasive species of fish, and one user found, you guessed it: a negroni spagliato with prosecco in it. The list goes on, easy to replicate for sports, games, and nostalgic movie references. And, while it seems like this meme might teter on insensitive, brands are easily taking part and appear to be free of backlash for this recurring seasonal joke. As proof, even Snickers has responded in a quote tweet of Xbox: “PSA: check your candy for trolls (and goblins) ((and witches)).” 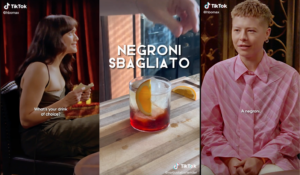 This week on TikTok: A negroni sbagliato (with prosecco in it)

House of the Dragon’s Emma D’Arcy has accidentally inspired everyone on the internet to make a new cocktail (or just a TikTok). In an HBO Max interview with their co-star Olivia Cooke, D’Arcy answered that their drink of choice was a negroni, punctuated by the details “spagliato. With prosecco in it,” to which Cooke replied “ooh, stunning.” HBO’s TikTok clip of the interview has gone entirely viral, with 15.7M views and 1.4M likes.

But it’s the audio of the clip that’s gone far—rather than the drink in question—being used as a meme for over 30K videos on the app. It’s been used to back conversations asking any number of questions; instead of “what’s your drink of choice?” users ask “what’s your go-to outfit,” or “what sort of music do you like?” each answered in three parts to match D’Arcy’s, and of course met with Cooke’s “stunning” response. Many take the self-deprecating humor route, as Gen Z so often does, asking questions like “what’s your mental illness of choice?” Some do answer their own drink of choice, but it’s a classic McDonald’s diet coke (with extra ice) instead of a cocktail with a twist.

Of course, some are trying the drink, and making content of it when they do. Recipes for the cocktail, under the original sound, are racking up thousands of likes, with comments noting every bartender will likely be getting this request soon. Even though the recipe itself is quite simple, at only 3 ingredients, big brands like New York Times Cooking are taking their opportunity to get clicks, tweeting the link to a recipe with the caption “A negroni. Sbagliato. With prosecco in it.”

Dunkin’ changed their rewards, and their loyalty members are furious

Young people debate Starbucks versus Dunkin’ all the time, but some members of DD Perks are giving up the battle this week after changes to the loyalty program. Like many others, DD Perks is an app-based point system, which offered users a free drink at 200 points and one on their birthday. But, the system has changed: free drinks are now hundreds more points away, and birthday drinks are gone.

While Dunkin’ claims the changes were based on member feedback and enhance point earnings for users, they were quickly debunked. In the Dunkin’ Donuts subreddit, one member pointed out, “Even while ‘boosted’ I’m earning 30% less points compared to the old system.” The claims from Dunkin’ just didn’t add up; one Twitter user showed the new point quality makes free drinks “$20-$30 more.” Plenty have denounced their Dunkin’ loyalty altogether, and some say they’re “a starbies girl now.”

Now instead of spending $40 to get a free drink from Dunkin, I have to spend about $60-$70 with the new app/rewards update? Y’all what🥴
I know inflation has been bad but $20-$30 more for a free drink? Y’all gotta be joking. Please say it’s a joke. @dunkindonuts

And Starbucks certainly did take advantage of their competitor being down for a moment, announcing their new loyalty partnership with Delta Airlines just days after Dunkin’s change. The rewards collaboration will let users link their Delta SkyMiles account to their Starbucks Rewards, and start earning miles in tandem to their stars. They’re even going bigger by offering those who sign up before the end of the year 500 miles, and 150 stars after their first qualifying purchase. YPulse’s Brand Loyalty report shows a top factor that will keep Gen Z and Millennials loyal to a brand is giving them free things, and 33% say they would stop being loyal to a brand who increased their prices. 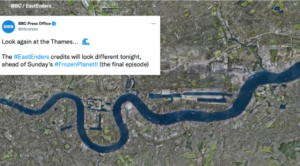 British soap lovers will notice their beloved East London drama featuring a different ending credit. As part of a one-off special to advertise the last episode of the BBC Frozen Planet II series, the classic panned-out view of London’s East End will see the impact of climate change. With David Attenborough’s recent series already discussing the seriousness and importance of stopping climate change now, the advert creates a sense of shocking revelation for those that don’t believe climate change is an issue as of yet.

It’s causing quite the stit on Twitter too, as many diehard EastEnders fans were upset that it was an advert and not a trailer for the next thrilling story. But for the majority, it was praise for the hard-hitting realisation that climate change is closer than they think, and the creativity of being able to “hammer the message home.”

Eighty percent of young Europeans believe climate change is an immediate threat to human life and nearly three-in-four young people believe they have the potential to help stop climate change. The use of ads being used to declare support for a cause is welcome by the majority (59%) of young Europeans and something that brands should consider when hoping the grab the attention (and support) of these activist-eager generations.

Apps: Tinder has added an Election Center to learn more about voting while they swipe

Music: Nicki Minaj called out the Grammys for moving her record breaking hit “Super Freaky Girl” to pop categories, but not other rap songs

TV: SNL is getting backlash for doing a skit of The Try Guys’ video addressing their recent scandal

Cartoon Network is being absorbed by Warner Bros.

Beauty: Skinny brows are back, but no one is actually shaving them to get the look