Though it’s only September, “spooky season” has already begun for Halloween-loving Gen Z and Millennials. The moment August ends, many flip the switch to autumnal fashion, apple picking, and the cozy vibes they wait all year for. For weeks already, young people on social media have been sharing their excitement for all that comes with the changing season. Users on every platform measure the beginning of the season to the first sighting of a Spirit Halloween and the return of the Pumpkin Spice Latte. As they bring out the chunky sweaters, regardless of the weather, planning their Halloween celebrations are next up at the top of their fall to-do list.

On TikTok, the hashtag #Halloween2022 already has 1.3 billion views. But for these gens, Halloween is not just for going out in their insta-ready costumes. In fact, YPulse’s Halloween report shows that over half of 13-39-year-olds say they’d rather stay in than go out on Halloween this year. Instead, YPulse data also shows what they’ll likely be doing: watching their favorite Halloween themed movies and TV episodes.

The vast majority of young consumers (83%) agree “watching certain movies/TV shows is a Halloween tradition.” And with so many options, both classic and new, they won’t be watching just on Halloween, but all the time leading up to it. We asked Gen Z and Millennials what kinds of Halloween-themed programming they’ll be watching this year, and on which platforms, and these are their top choices: 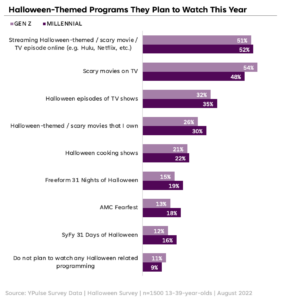 Nearly all of Gen Z and Millennials tell YPulse they’re planning to watch some kind of Halloween programming this year. Their top choice is Halloween-themed/ scary movies / TV episodes on streaming services, naturally. YPulse’s Media Consumption report shows 86% of young people watch content on streaming platforms weekly or more, making it the top form of video content they watch, so it’s no surprise that’s where the majority will be watching Halloween programs. They’re looking forward to special Halloween content on these platforms, too, as 83% agree streaming services should suggest Halloween content during October (but they probably wouldn’t be mad if it started in September).

To appeal to the young gens’ love for Halloween streaming, some platforms have begun to mirror the classic marathon-style schedule cable channels have offered for years. Though streaming services aren’t dictating what’s on when, they can use a release schedule to encourage viewers to plan their streaming time as they would a classic TV release night. This year, Netflix has created “Netflix and Chills,” a Halloween lineup of new releases every Friday of September and October, including both movies and series. On Twitter, one user took it upon themselves to share 31-day Halloween watch lists for several popular streaming platforms (Netflix, Hulu, HBO Max, Prime Video, Shudder and tubi) and has received 158K likes.

Cable TV has a seasonal advantage

But, despite their significant preference for streaming services over cable TV, young people say they are planning to watch scary movies on TV nearly as much as they’ll stream online this Halloween. While YPulse data shows only 16% of young people say they watch cable weekly or more, watching scary movies on TV was Gen Z’s top response to what kind of Halloween-themed programming they plan on watching.

One possible explanation for this is that marathon style watching appears to be a Halloween fav for young people, at least for spooky season. Cable channels are the originators of monthly marathon programs, like Freeform’s 31 Nights of Halloween, AMC’s Fearfest, and SyFy’s 31 Days of Halloween, which roughly 15% of young people say they’ll be watching each. The benefit of marathons is that they can tune in at any time and find a Halloween flick, without having to search through tons of options on the variety of platforms they subscribe to. YPulse data shows that 60% of young people agree they have experienced decision fatigue from choosing what to watch on streaming services, and the nature of their Halloween watching is to cozy up and relax, not stress over which movie has the perfect vibe.

So, while streaming services are certainly going to be successful as they release their spooky program lineups for the year, cable channels should take advantage of the opportunity to pull in young people with Halloween reruns. It’s unlikely that young people will have a subscription to every streaming service, meaning they’ll only have access to some of their favorite Halloween classics, which is a huge part of their watching experience, because…

Nostalgia keeps Halloween programming popular as the gens get older

While you might assume Millennials have reached an age where they’d grow out of Halloween celebrations, and the oldest of Gen Z might be reaching that age too, it’s quite the opposite. Gen Z and Millennials even show nearly equal interest in most kinds of Halloween programming, with only slight differences in the platforms they’re planning to watch on. Given the majority see this activity as a tradition, it’s not surprising that they’re embracing it even as they get older. On social media, young people express their love for Halloween watching in viral posts, showing how widely popular this attitude is.

For these gens, this season of festivities is evergreen, and 85% of young people tell YPulse they agree that you’re never too old to celebrate Halloween. In fact, it seems the nostalgia of doing the same things they did as a kid is one of the best parts, as 85% agree Halloween is a great excuse to be a kid again. The types of Halloween-themed programming they’re planning to watch is evidence of this, as well, as 28% say they’ll be watching Halloween-themed / scary movies that they own already. Meaning, they’re likely watching old Halloween classics their parents had on DVD as much, if not more, than new releases.

And new platforms who take note of the value of nostalgia will be rewarded, as is evident by how eagerly viewers are awaiting the release of Hocus Pocus 2 on Disney+ later this month. Many Millennials will remember the original 1993 release, but Gen Z likely grew up with it on rerun—and the youngest Gen Z are, too, as Freeform will be playing it 13 times next month. YPulse data shows 83% of Millennial parents use watching TV together as a way to spend time with their kids, so the tradition of nostalgic watches will likely be passed on to yet another generation.

Halloween plans are on the horizon, and this year Gen Z and Millennials are planning to celebrate...