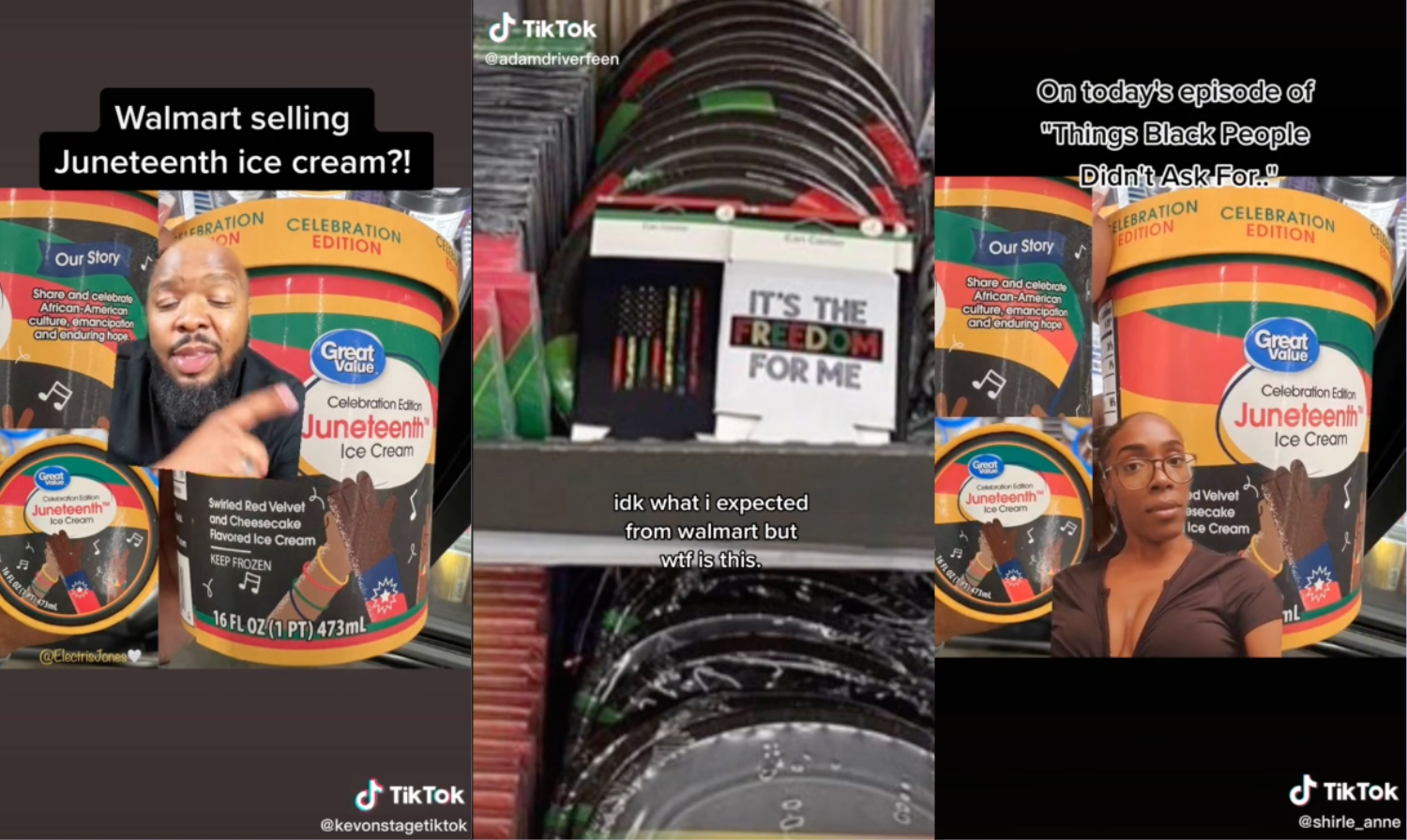 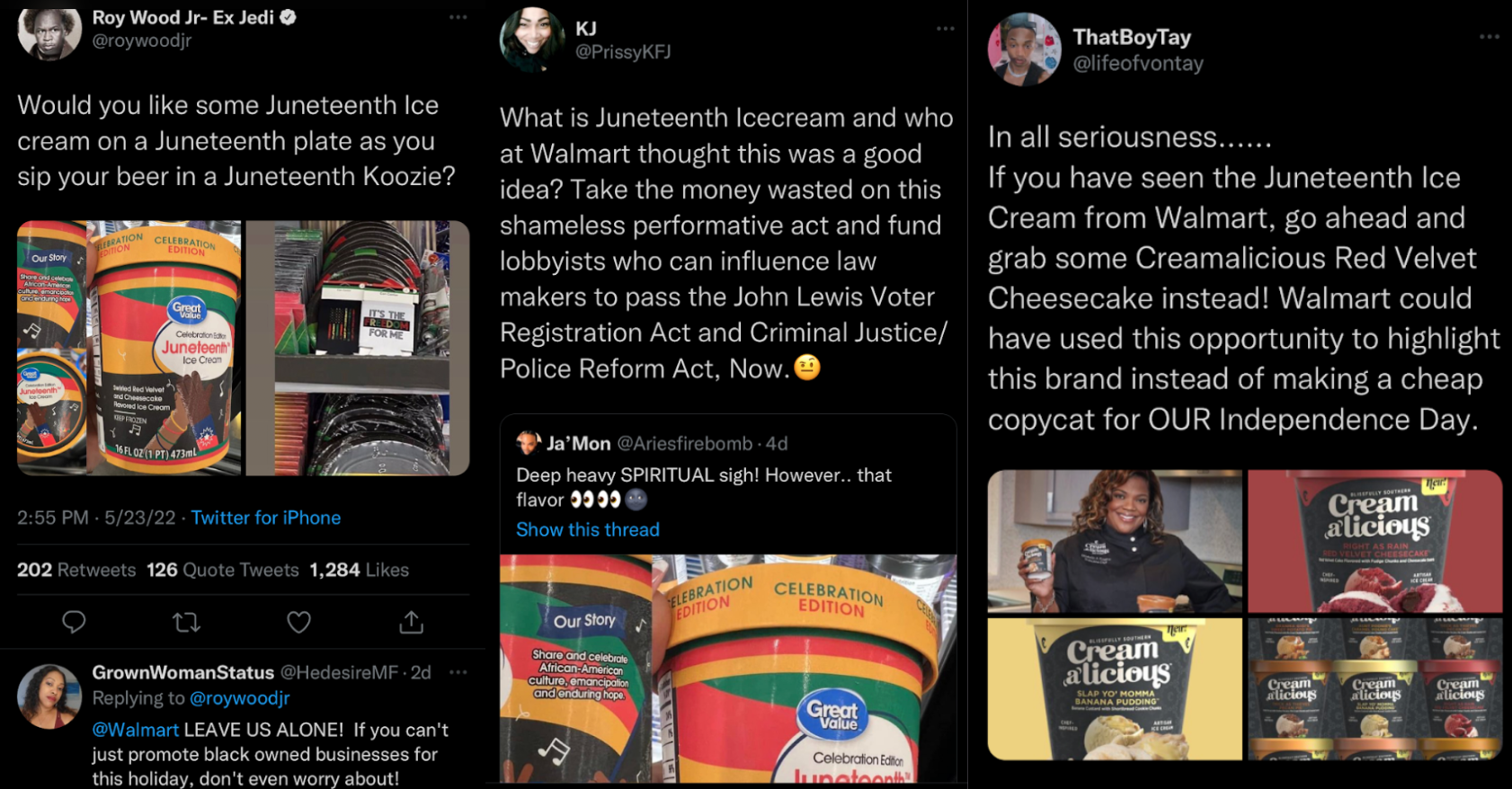 Earlier this week, images from Walmart’s Great Value “Celebration Edition: Juneteenth Ice Cream” products circulated online—and the reactions were not good. The product line included themed party supplies, which included red, yellow, and green napkins, paper plates, and beer cozies with the slogan “It’s the freedom for me.” Meanwhile, the label on the red velvet-flavored ice cream carton read, “Share and celebrate African-American culture, emancipation and enduring hope.” In some retail locations, there were Juneteenth-themed wine, water bottles, and t-shirts. Users on TikTok and Twitter weren’t happy with the retailer for “inappropriately commercializing” Juneteenth, a day marking the end of slavery. One user tweeted: “Walmart could have used this opportunity to highlight this [Black-owned] brand instead of making a cheap copycat for OUR Independence Day.” while another user pointed out that it’s “important to have diverse voices at the table when making strategic business decisions. When you don’t, you end up making costly, foolish mistakes.” Some users pointed out that people should instead support Black-owned Creamlicious Ice Cream from Target, founded by Liz Rogers, which also has a similar red velvet-flavored ice cream. Following the swift backlash, Walmart apologized and said in a statement: “Juneteenth holiday marks a commemoration. However, we received feedback that a few items caused concern for some of our customers and we sincerely apologize. We are reviewing our assortment and will remove items as appropriate.” The retail giant also said it would remove some of the Juneteenth-related products from store shelves. YPulse told you about the type of holidays that companies need to be mindful of when it comes to marketing. We also told you how young people aren’t afraid to call out brands for culturally appropriating holidays like Black History Month or Pride Month—and Juneteenth isn’t an exception. For brands, there’s a big lesson: simply selling merch is not the right way to support a significant holiday or date. Think about the real ways that the community being targeted can be supported, and please, have a diverse team making the decisions around these holidays.

TikTok is driving a lot of what young people are listening to, so it makes sense that going viral on TikTok has become a major strategy for music marketing. (Look at Lizzo’s latest hit, which had the now expected TikTok challenge dance pushing it to the top of the charts.) But some musicians are pushing back against the pressure for music to go viral on the app. On Sunday morning, Halsey jumped on TikTok to vent about their record label, Astralwerks/Capitol pressuring her to create a viral moment on the app in order to release a track. In a video, Halsey wrote in captions: “Basically, I have a song that I love that I want to release ASAP, but my record label won’t let me,” with the alleged unreleased track playing in the background. They continued: “I’ve been in this industry for eight years and I’ve sold over 165 million records and my record company is saying I can’t release [the song] unless they can fake a viral moment on TikTok.” It received over eight million views, and many fans commented with their support for the 29-year-old musician. One person wrote: “you deserve the best halsey, you needa find one who lets you release YOUR music when you want,” while fellow music artist King Princess commented: “Tell the girls !!!!”  But some other users pointed out that the video itself is the “fake viral moment,” with one user commenting “This is the viral marketing video…” and another said “hey look. that viral moment they wanted.” Halsey made a follow-up video that received 4.7 million views with the caption: “I wish I was kidding lol” and used the audio from a supposed meeting they had with an unnamed executive from the record label talking to Halsey about creating the fake viral moment, ending with Halsey saying “I just hate this.” Previously, YPulse has told you that organic viral moments are the best way to attract young people—but it seems like some artists in the industry are starting to push back against engineering these “organic” moments. 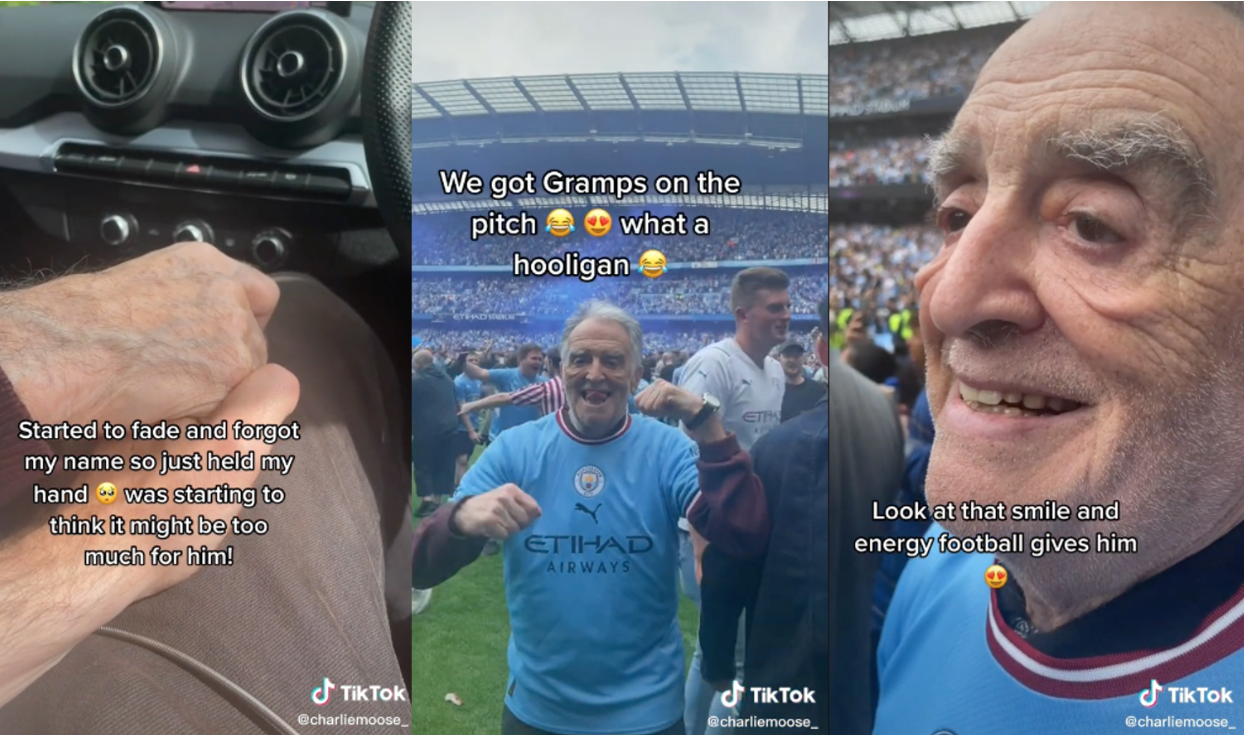 Last Sunday, after a nerve wracking ninety minutes, Manchester City won against Aston Villa 3-2—much to the dismay of Liverpool fans and Steven Gerrard. Young Europeans are avid sports fans, more so than their North American peers, deeply besotted with their chosen football fans. But not as much as 84-year-old Barry Carr.  Grandson Charlie Gibson and his granddad, who are known for posting videos about the battle with dementia on the TikTok @charliemosse_, went viral this week after Charlie shared content about his granddad watching his beloved team win the cup. The video shows their trip to the stadium, Charlie documenting his struggle as Barry struggles to regain where or who he is, but his love for his team overcoming the obstacles. It starts with their breakfast out – joined with a song – and follows their day as they get to the City grounds, showing the audience the grandson’s patience as he waits for his Granddad to recover. Of course, it’s followed with more singing as Barry remembers City’s “blue moon” song despite everything, and celebrations as they watch City score three goals within the space of ten minutes (and documenting even some football hooliganism) – whilst showing how football gives him the enjoyment he sometimes forgets abouts. The video so far has 5.7M views and 772K likes as the heartfelt story goes viral across all media platforms, raising awareness of dementia whilst highlighting the importance, significance and sentimental meaning football has on Europeans regardless of age. YPulse also told you that pure, wholesome content is something that young people (sports fans or not) crave—and the story of Charlie Gibson and his granddad is clearly something that has touched audiences in the U.K. and beyond. 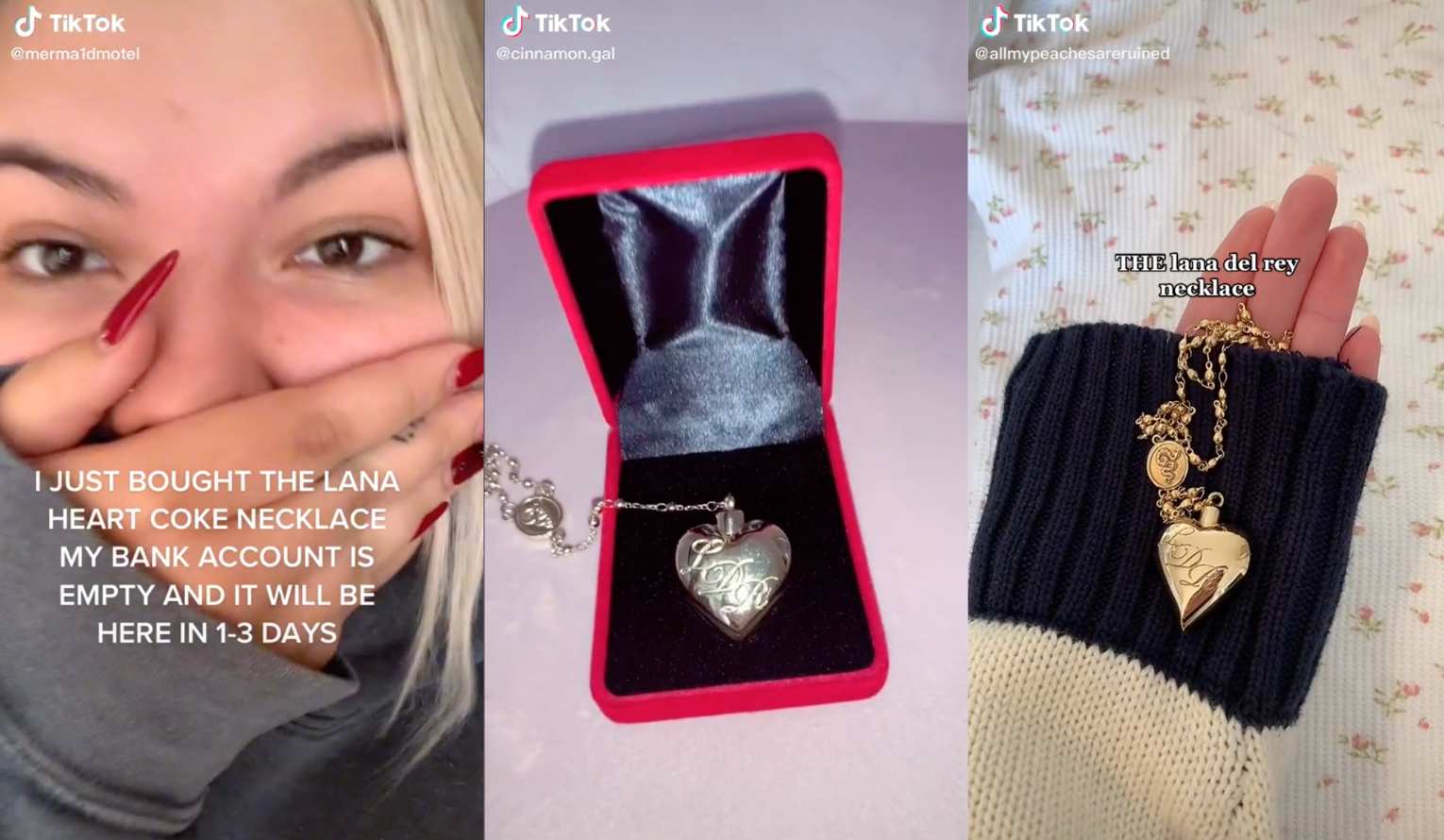 Links We’re Passing
A discounted necklace that used to be part of Lana Del Rey’s merch is going viral on TikTok several years later—and fans are spending a lot of money on it on resale platforms.

Celebrities are speaking out about how Seth Green’s Bored Ape NFT, which was supposed to be the star of his animated series, was recently stolen and the show can no longer move forward.

The Sims 4 is adding custom pronouns to the game.

The first part of the fourth season of Netflix’s Stranger Things is finally here.