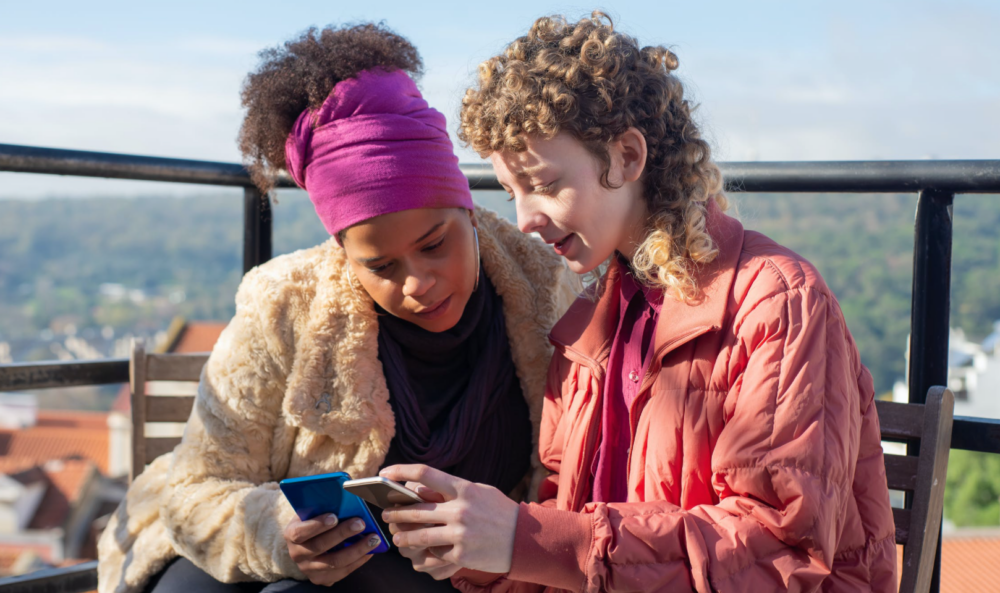 What are the biggest reasons young people get on social media? We asked and found big differences between Gen Z and Millennials’ social media usage…

YPulse’s recent Social Media Behavioral report found that Millennials are much more likely than Gen Z to remember a time before social media. These two generations have grown up in different eras of social platforms, making their context in using social media platforms very different. Many Millennials were users of the very first social sites, which were engineered for connecting with friends and family. Meanwhile, much of Gen Z was born as social media has evolved into image and video sharing hubs. In many ways, that’s all they’ve ever known. In fact, YPulse’s social media behavior survey found many differences in how Gen Z and Millennials use social media that stem from their differing experiences on social platforms. But one of the most significant is the fact that they’re not signing on to social media for the same reasons: 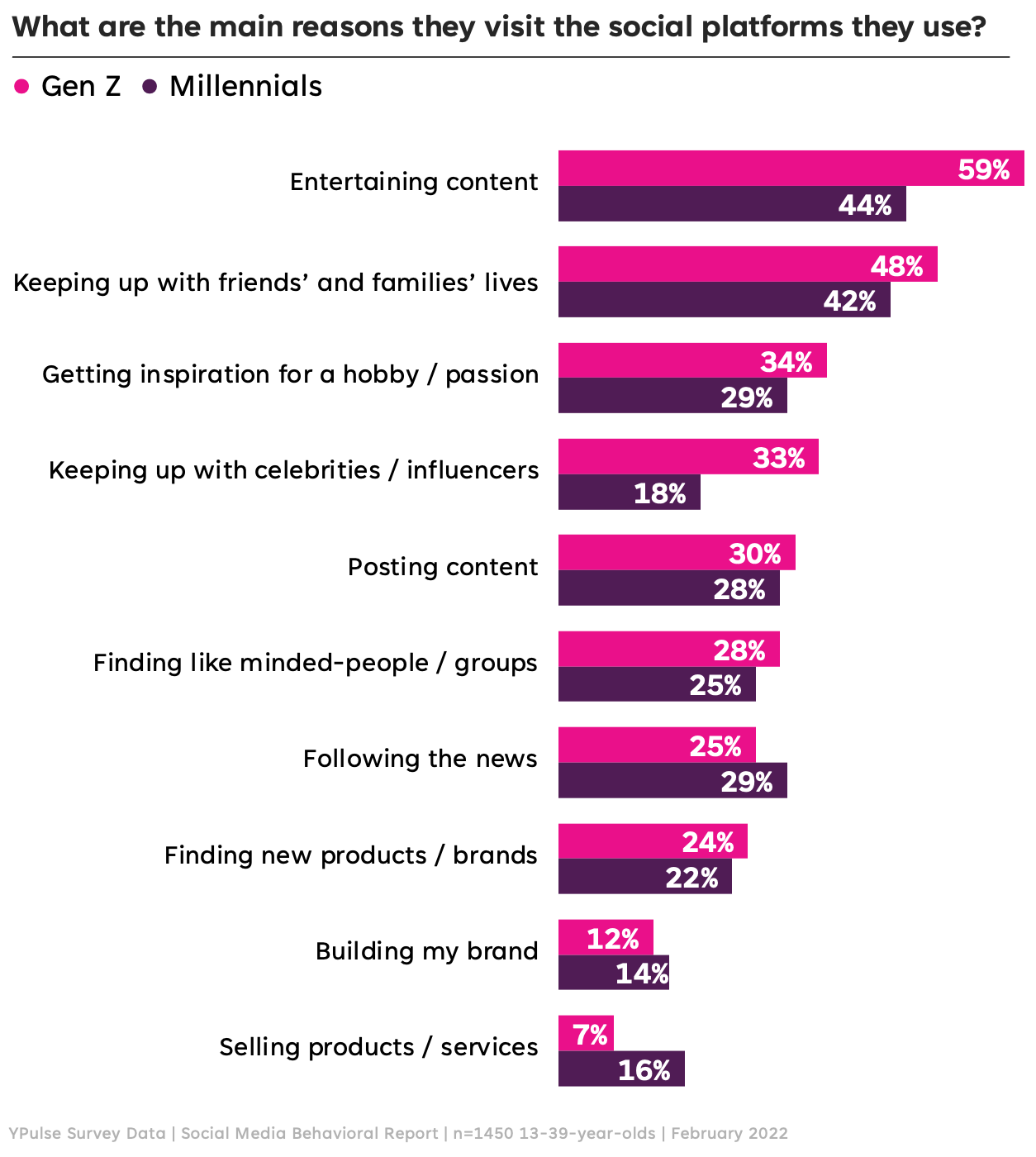 This helps explain why they’re fueling the popularity of platforms that are focused on entertainment over socialization. By now, you probably know that TikTok is dominated by Gen Z. The app helps young people connect to be sure, but the first focus is to hook them in with addictive entertaining videos. Of course, that entertainment was especially craved during the pandemic when most young people were cooped up in their homes, and TikTok’s use among young people soared.

Gen Z isn’t just more likely to be visiting social platforms to find entertainment, they’re also more likely to be sharing the entertaining content that they find there. Our research shows that 45% of Gen Z say they share memes / posts/ videos that they see on social media with their friends, compared to 37% of Millennials. We told you that social media memes / viral videos are the top pop culture moment that young consumers think their generation cares about—and Gen Z are the ones helping that content to go viral. But this is also an indication that Gen Z is connecting with their friends in a different way from Millennials: memes and other social content are a form of language for them, and a way to connect with one another.

It’s also notable that Gen Z is much more likely than Millennials to say that keeping up with celebrities and influencers is a main reason that they are visiting social platforms. This is clearly more a part of their entertainment than it is for older gens. This difference is also reflected in the data on who they follow on social networks: 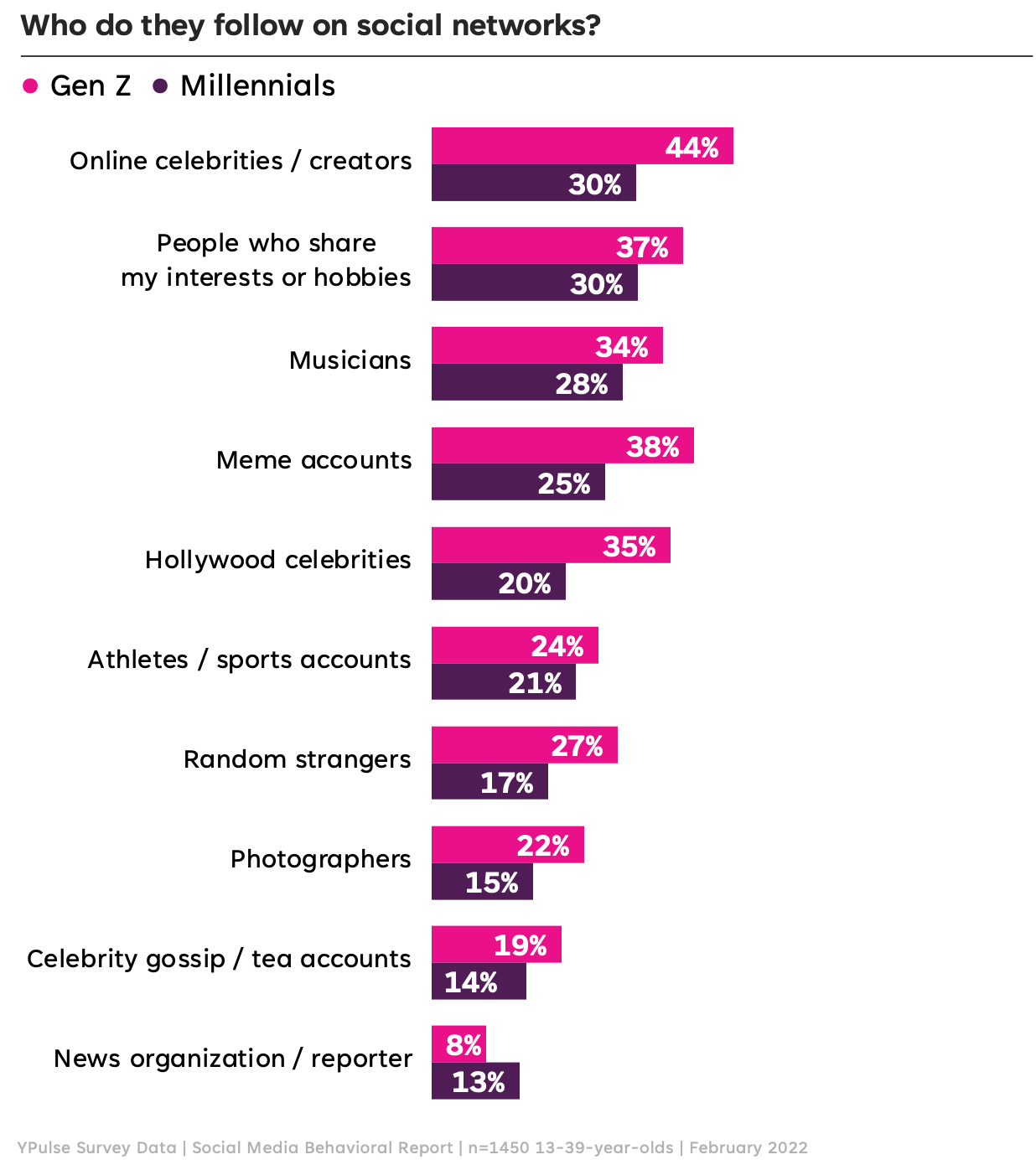 Gen Z is more likely than Millennials to follow online celebrities / creators, people who share their interests or hobbies, musicians, meme accounts, and Hollywood celebrities. In short, the kinds of accounts and individuals that fill their feeds with entertainment. Online celebrities are also influencing the content that Gen Z discovers: they’re more likely to have watched a video / TV show / movie or listened to a new music artist / band after learning about it from an online influencer.