How Many Young Consumers Plan to Watch The Super Bowl This Year? 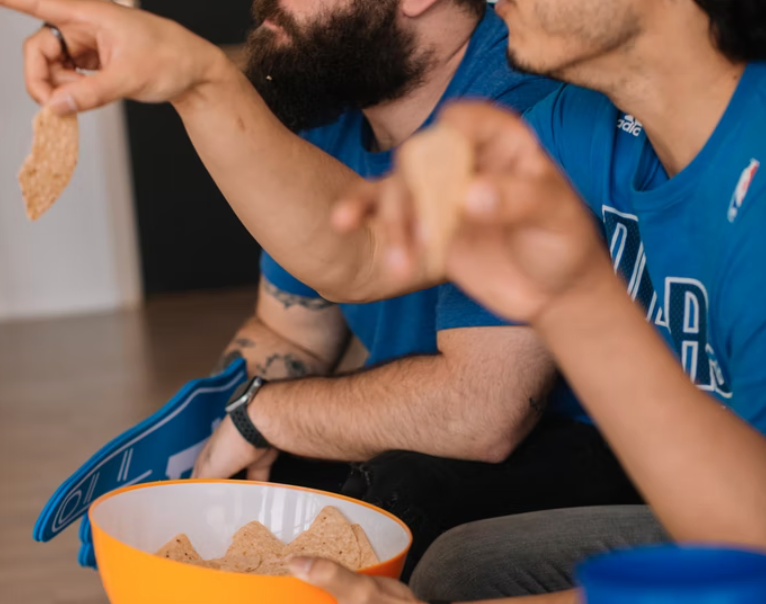 How many young consumers are going to watch the Super Bowl—and how are they planning to watch it? We used our on-demand survey to dig into their plans and shows how their big game viewing continues to shift…

Super Bowl LVI is almost here and is the second big game to take place during the pandemic, but will it impact how young consumers watch it? The NFL is one of their top sports leagues—and ahead of the NFL season, we broke down how many of them watch football, reporting that a third of young consumers follow NFL football, while nearly half say they watch football on-screen.

But YPulse’s Pop Culture Redefined trend report found that big sports events are not top pop culture moments that these generations pay attention too, and the NFL has certainly been doing a lot–from teaming with Nickelodeon to hosting tailgates on TikTok–to reach younger viewers. Meanwhile, many brands are  increasingly shifting Super Bowl marketing from big budget game commercials to off-TV digital activation like the metaverse, the return of in-person experimentation, and more TikTok. So how many Gen Z and Millennials are actually planning to watch the Super Bowl this Sunday? We used our on-demand survey platform PULSE to find out—and we compared it to last year’s results to analyze the shifts in their viewing behaviors: 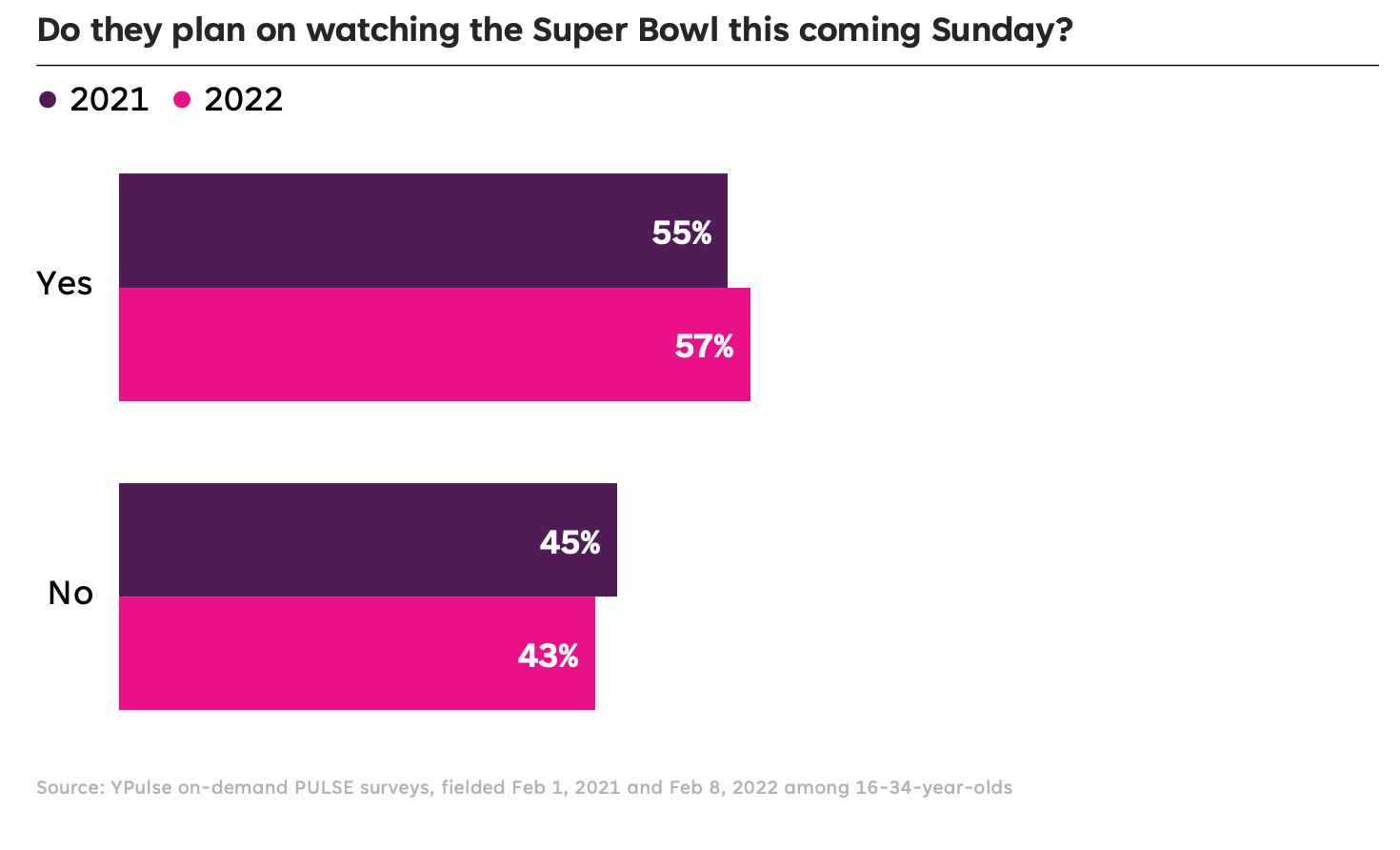 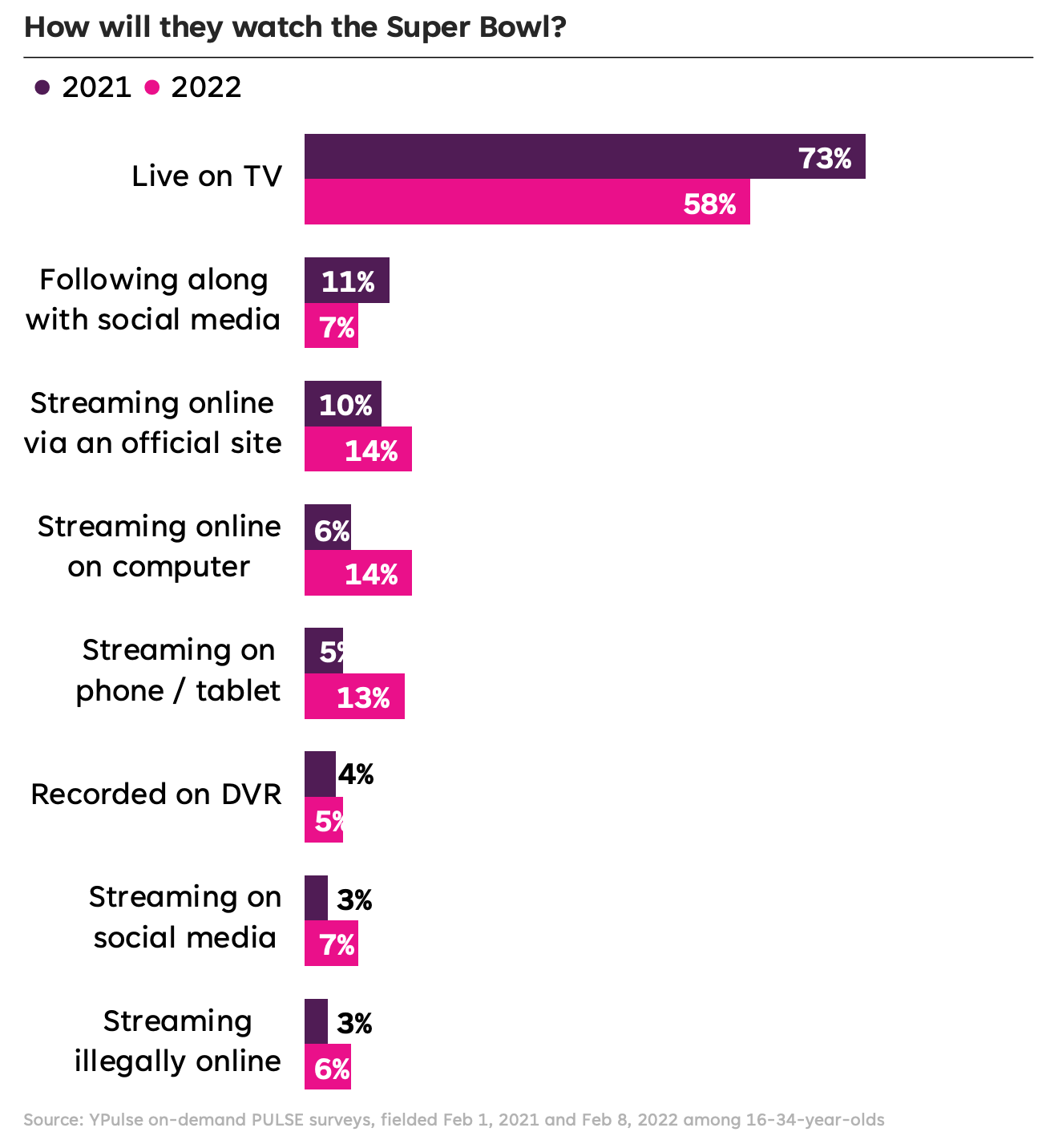 YPulse’s Scouting Next Gen Sports Fans trend report found that a quarter of young consumers would be more interested in watching sports if they have the ability to watch games online. The number of young viewers who say they plan to watch the Super Bowl by streaming online via an official site, on their computer, on a phone / tablet, and on social media has increased this year, while the number who plan to watch on live TV has dropped. We told you that more companies are continuing to bring marketing off the TV screen this year, and we can expect that will keep shifting in the coming years among those trying to reach young viewers.  While the number who plan to “watch” by following along on social media posts has decreased, that doesn’t mean Super Bowl content won’t be trending during the game. On TikTok, the hashtag #superbowl currently has 3.6 billion views with users sharing what they’re excited to see at this year’s event, including the halftime show, which is being dubbed a “‘90’s lovefest” and will feature powerhouse rappers Dr. Dre, Snoop Dogg, Eminem, and Kendrick Lamar joined by R&B legend Mary J. Blige. Meanwhile, the official @nfl account on TikTok has been promoting the upcoming TikTok Tailgate party as well as clips of the Los Angeles Rams and Cincinnati Bengals leading up to the Big Game on Sunday.

But we found another shift in their Super Bowl plans, with more planning to leave home to watch the game this year: 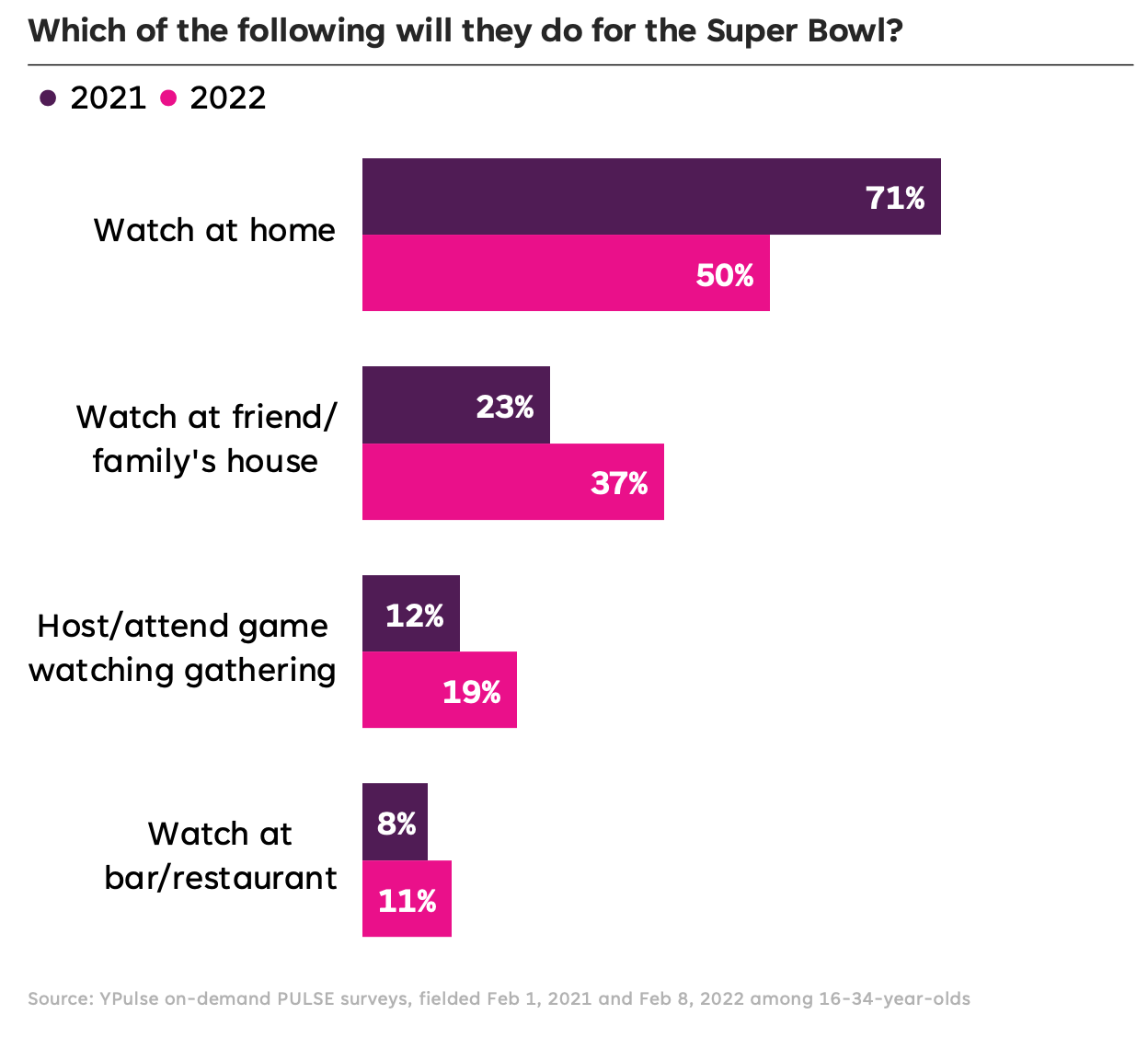 The number of young consumers that say they plan on watching the game at a friend or family member’s house went up, as did the number that plan to host/attend a game watching gathering. The pandemic isn’t over and young people remain cautious when it comes to attending large gatherings, but they seem to be more comfortable hosting or attending parties with close friends and loved ones this time around, with the roll out of vaccinations and boosters being a likely factor. This could mean that while viewership of the game remains static, spending around the game will increase.

What exactly do young people plan to buy for these Super Bowl celebrations? We asked them that too: 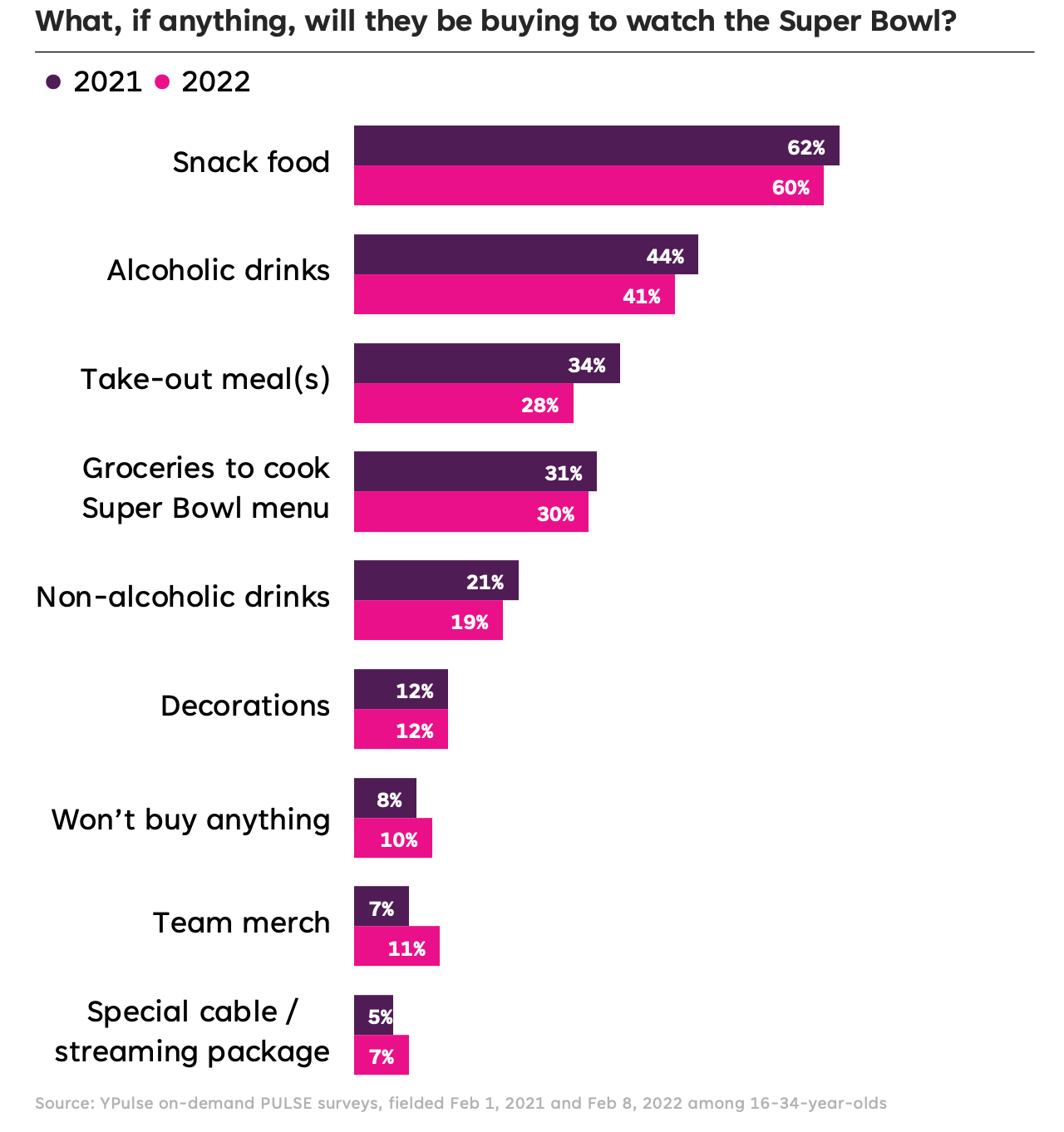 While most of what young consumers plan to buy for the Super Bowl stayed relatively the same from last year, the number who say they plan to order take-out meal(s) went down by 6%–perhaps because fewer will be staying home and more will actually be going to those restaurants or bars in person.Meanwhile, the number who say they plan to buy team merch went up, indicating that young people want to get into the spirit and support their favorite teams. Of course, merch has always been popular but in recent years, it seems like young people are flocking to get their hands on any kind of branded merch they can.

Clearly,  the ways that Gen Z and Millennials are watching the Super Bowl will continue to shift, and the brands that are taking steps to meet them in digital spaces are doing the right thing. But there’s also an opportunity for marketing IRL products and events for those young viewers who are getting together for big game viewing–even if they’re streaming instead of watching it the old school way.