Yes, Young Consumers in WE Are Celebrating Halloween—Here’s How 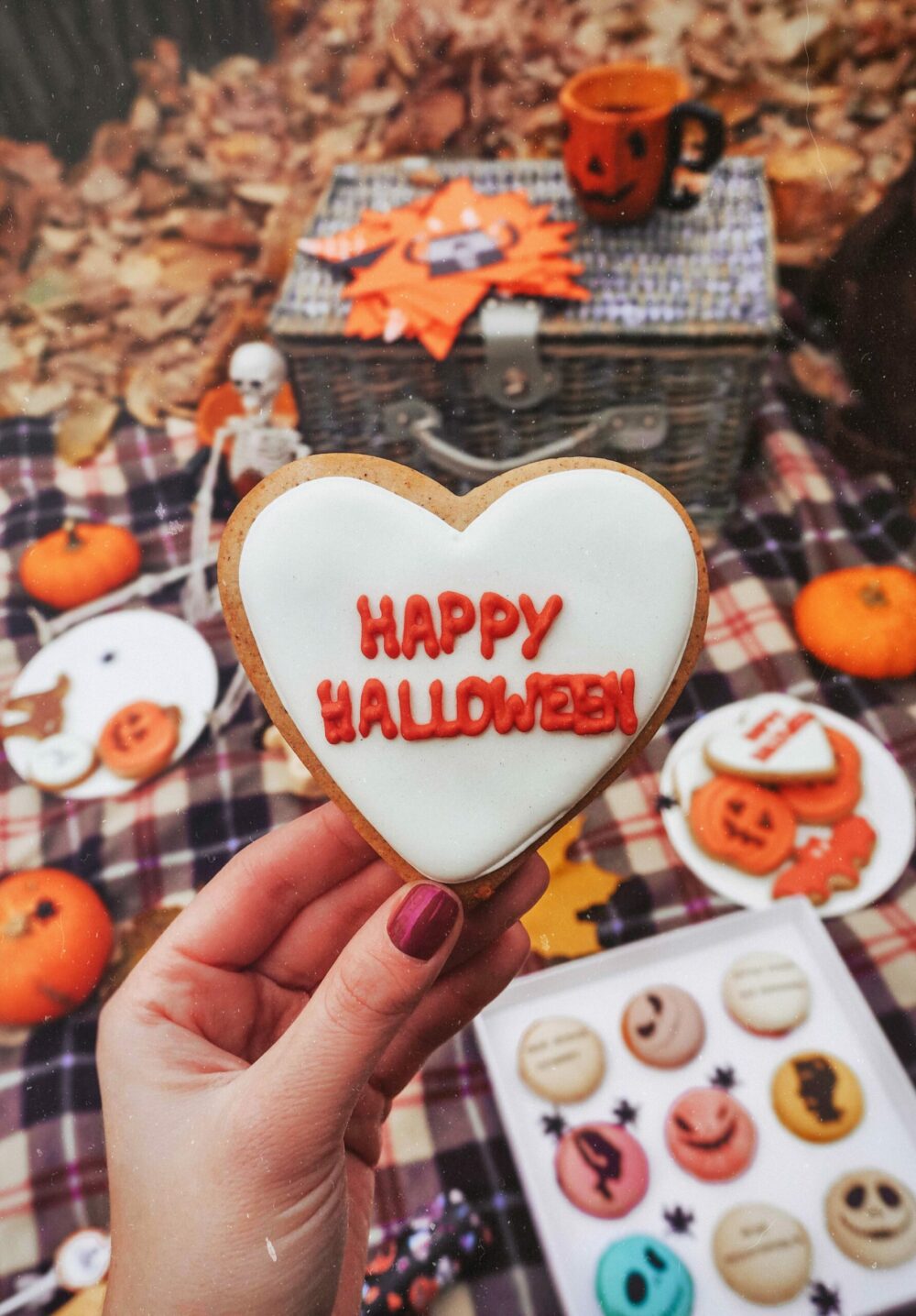 The American-created holiday has made its way to Europe. Here’s how young consumers there are celebrating this year…

Halloween may have its roots in ancient Irish tradition, but in its modern iteration, the spooky holiday is an American creation. Generations of young people in the U.S. have dressed up, carved pumpkins, gone trick-or-treating, and eaten (too much) candy. But as culture becomes increasingly globalized thanks to the internet and social media (see YPulse’s Borderless Culture trend report) this Fall tradition has spread beyond North America. YPulse’s recent Western Europe Halloween survey found that the vast majority of Gen Z and Millennials in the U.K., France, Germany, Italy, and Spain not only celebrate the holiday but celebrate it in the same ways Northern Americans do.

In fact, when Halloween was canceled due to COVID in 2020, brands in Europe tried to find ways to get young people in the Halloween spirit anyway, which is something young Europeans appreciate: 63% of 13-39-year-olds tell YPulse that they like it when brands release Halloween-themed products. Popular U.K. beer brand Hobgoblin went all-out with a special Halloween ale (dubbed “Best Sipped in the Dark”) along with several outdoor activations involving glow-in-the-dark murals. It also teamed up with social media platforms—including Facebook, Facebook Live, Twitter, Instagram, Spotify, YouTube and Zoom—to host a virtual festival, known as Hobtoberfest. Activities included tattoo and art giveaways, a festival homebrew challenge, beer cocktail tutorials, and more. Meanwhile, Twitter teamed up with popular U.K. illustrators to bring some of the platform’s viral Halloween tweets to life on London’s streets where people could enjoy them despite lockdowns and social distancing. Featuring spooky glow-in-the-dark illustrations in popular locales, the campaign was an effort to offer a bright spot in an otherwise dark holiday season.

While COVID is still a factor in this year’s Halloween fun, our recent survey finds that many young Europeans still plan to celebrate, just like they do every year: 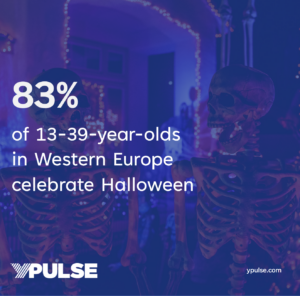 Let’s start with the basics: the vast majority of Gen Z and Millennials in Western Europe now celebrate the holiday, with just 17% telling us they never celebrate compared to 9% in North America. The holiday is most popular in the U.K., where 87% of respondents tell us they celebrate. Germans are the least likely to celebrate, with a 78% participation rate. But with COVID still a threat, this year will look a little different. Just 76% of young consumers said they plan to celebrate this year, and when asked if they thought COVID would alter their plans this year, three-quarters of 13-39-year-olds answered either “yes” or “maybe,” meaning that when the day comes, there could be fewer celebrants. But the enthusiasm is still there. Seventy-five percent of Gen Z and Millennials in WE agreed with the statement, “you’re never too old to celebrate Halloween,” and 61% tell YPulse they’re excited to celebrate Halloween like they did pre-COVID. 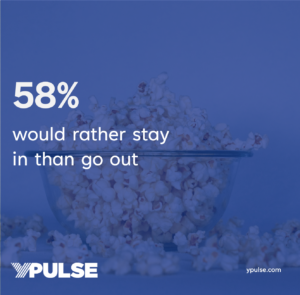 But the majority of young Europeans would rather stay in than go out on Halloween.

Despite looking forward to celebrating as they did pre-2020, more than half of 13-39-year-olds in Western Europe would rather spend their Halloween Netflix-and-chilling rather than going out—which is virtually the same amount as North America—highlighting this generation’s universal tendency to opt for the couch over a party any day of the week. Gen Z is slightly more inclined to go out this year, with 53% agreeing they’d rather stay in compared to 60% of Millennials. But even as the younger generation plans to hang out with friends and go to parties at higher rates than Millennials, they’re still largely planning to keep it mellow. In fact, among those celebrating Halloween this year, 31% of both generations plan to do so by watching scary movies, a fact they want streaming services to take seriously: 70% of young Europeans say streaming services should suggest Halloween content in October. Netflix is already taking this to heart—throughout the month of October, the streaming giant will release new original horror flicks every week on top of its slate of beloved Halloween classics. 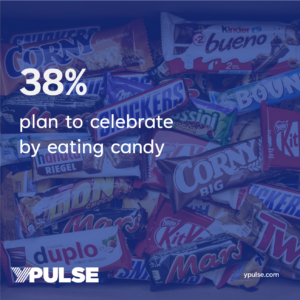 The top way they’re planning to celebrate this year is by eating—and buying—candy.

Halloween has long been one of candy’s biggest holidays in the U.S., and consuming the sweets has topped the list of celebration plans in the region for three years running. Now, the tradition has spread across the Atlantic and onto the shores of Western Europe: 38% of 13-39-year-olds in WE plan to eat candy this year, taking the honor of being the top way they plan to celebrate, followed by buying candy (36%). Young Europeans aren’t planning on consuming quite as much candy as North Americans, 54% of whom will celebrate this way, but with nearly two in five planning to satiate their sweet tooth this year, it’s clear that Halloween is a big candy day (a.k.a. opportunity) for Western Europe, too. And while Reese’s has long topped the list of favorite Candy in the U.S., young Europeans are partial to Haribo, the German-made gummy confectionery, which far out-ranked their second favorite candy, chocolate. 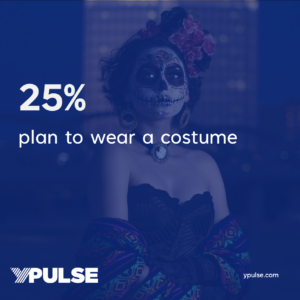 Costumes aren’t quite as hot in Western Europe as they are in North America, with 25% of young Europeans planning to wear a costume this year compared to 36% stateside. But one reason for this deficit could be simply a lack of good costume options outside of the U.S. In a recent Buzzfeed article chronicling specific American things that non-Americans are jealous of (think voting stickers and high school lockers), the biggest source of international sourness is—wait for it—Spirit Halloween, the annual Halloween big box store that opens in cities across the country every Fall. “It’s getting to that time of year again where I become VIOLENTLY jealous of all americans who can go to Spirit Halloween,” one U.K. Twitter user wrote, while another lamented that “the best I can get is a plastic pumpkin bucket from Poundland.” Still, Gen Z is slightly more costume-ready this year, with 29% saying they’ll don an outfit this year compared to 23% of Millennials. Among both generations, the majority plan to buy their costume rather than make it, and more than half get their costume inspiration from social media. Meanwhile, 18% of 13-39-year-olds say they’re interested in buying a costume even if they can’t go to a party, proving that young Europeans are excited to celebrate Halloween this year, even if COVID keeps them indoors yet again. 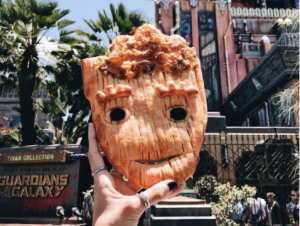 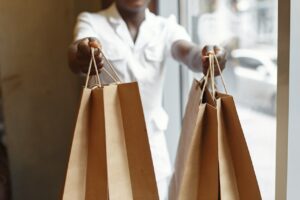