Which Iconic Characters Do Young Fans Want to See Re-Cast with BIPOC Actors? 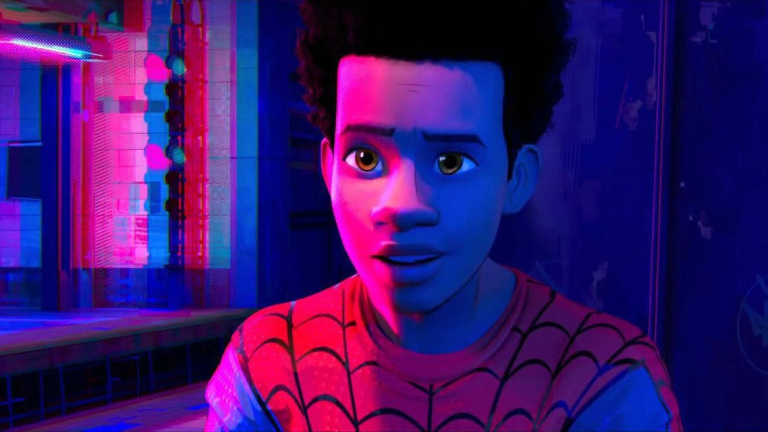 For years, Gen Z and Millennials have called out studios for whitewashing characters, or not featuring enough diverse casts. But our data shows they believe there has been progress: YPulse’s recent Representation in Action trend report found that 68% of 13-39-year-old BIPOC consumers say entertainment media does a good job of representing minority groups, compared to 46% in 2016. But while young consumers say there have been some improvements through the years, there’s still a long way to go: our trend data also found that 68% of 13-39-year-old BIPOC consumers feel like TV shows / movies stereotype people that look like them, and only 35% of BIPOC consumers say they often see their identity represented in media and brand ads compared to 54% of White / Non-Hispanic consumers.

Overall, 74% of 13-39-year-olds tell YPulse that more TV shows / should star non-white actors / actresses, while 85% of 13-39-year-olds say they are interested in watching a TV show / movie with a diverse cast. For the industry this of course means diversifying representation on new projects, and supporting or spotlighting BIPOC creators—but it can also mean reimagining what some of the biggest roles in media look like next. For more than a decade, the internet has seen multiple fan pushes to have BIPOC actors. In 2010, a fan campaign to have Donald Glover cast as Spider-Man gained attention. In 2016, the #StarringJohnCho movement on social media imagined actor John Cho (naturally) as the leading man in major movies, a response to Hollywood whitewashing that highlighted the rarity of Asian leads. Idris Elba has been rumored to be a frontrunner as the next James Bond, and teased fans about the possibility in 2018, and Bridgerton’s Regé-Jean Page is now a fan-favorite contender as well—either actor would obviously be the first Black Bond. But while so many of these imagined recastings have been, well, just imagined, some franchises have begun to embrace diverse casting of iconic characters in a more serious way. In 2018, Spiderman: Into the Spiderverse gave fans the first film representation of a Black Spider-Man. In the animated film, Afro-Latino teen Miles Morales was one version of Spidey (voiced by Shameik Moore) and praised for its diversity. Meanwhile, Disney+ and Marvel Studios’ The Falcon and The Winter Soldier explores the journey of Sam Wilson/Falcon (portrayed by Anthony Mackie ) into becoming the first Black Captain America—and people are watching: the series topped the Nielsen streaming charts. Disney also just finished the filming of their live action Little Mermaid movie, starring Black-ish actor and musician Halle Bailey.

YPulse’s Representation in Action research shows that Gen Z and Millennials want more of this: Sixty percent of 13-39-year-olds say that they want to see more diverse actors cast as previously seen characters. To dig into which they’d most like to see recast, we presented respondents with a close-end list of 18 iconic characters from major media franchises, including Marvel, DC, Harry Potter, Star Wars, and Star Trek, and asked them which they would like to see re-cast with a BIPOC actor. Overall, 74% choose at least one character they would want to see recast with a BIPOC actor, with only 26% saying they would not want to see any of the characters we listed recast. Here are their top responses:

Which character(s), if any, would they like to see re-cast with a BIPOC actor?

Classic Disney princesses were the top roles that Gen Z and Millennials’ would like to see recast with a BIPOC star—and it seems like the brand is ready to give them what they want. As mentioned, the upcoming live action version of The Little Mermaid will star Halle Bailey as Ariel, and recently it was announced that Latina star Rachel Zegler has been cast as Snow White in the upcoming live action adaptation. Meanwhile, Amazon’s upcoming Cinderella will star Camila Cabello as Cinderella, alongside Billy Porter as the “genderless” fairy godmother. Despite some racist comments from “White Twitter” surrounding the casting choices of Bailey and Zegler as Ariel and Snow White, many fans were quick to support both actresses. We should also point out that when Disney+ finally added the 1997 version of Cinderella starring Brandy and Whitney Houston to their platform, fans were so excited they celebrated it with a TikTok challenge. The excitement around both past and upcoming Disney projects proves young fans want to continue seeing more classic Disney princesses recast with BIPOC leads.

Popular superheroes populated the majority of the rest of the top ranking, with Spider-Man, Captain America, Batman, Wonder Woman, Superman, and Iron Man all in the top 10 list. While a BIPOC actor is yet to portray Batman, Wonder Woman, or Iron Man, Marvel’s decisions to have Spider-Man and Captain America portrayed by more diverse leads could be helping generate demand for more BIPOC superheroes. And young actors have been vocal about who they would like to see portray the iconic roles: Star Wars’ John Boyega recently expressed his interest in seeing Jonathan Majors or Bridgerton’s Regé-Jean Page as Superman in an upcoming reboot, while Page revealed that he auditioned to play the titular superhero’s grandpa in the SyFy series Krypton, but a DC executive reportedly refused to cast a Black actor. Of course, there’s proof that a superhero film can do well with a BIPOC lead: One of the most notable and successful examples of a superhero film with a diverse and predominantly Black cast is 2018’s Black Panther starring the late Chad Bosewick, which was praised for its portrayal of African culture, and ended up bringing in billions of dollars globally. Meanwhile, fans have already shown enthusiasm for the upcoming The Eternals and Shang-Chi and the Legend of the Ten Rings, which will feature Marvel’s first Asian superhero. The fact that superheroes are popular responses to this question is likely fueled by their devoted and large fan base, and early steps that have been taken towards diversifying beloved heroes.

When we compare the responses of 13-39-year-old BIPOC and White / Non-Hispanic consumers, we found some subtle differences in what characters they wish to see recast with BIPOC actors: 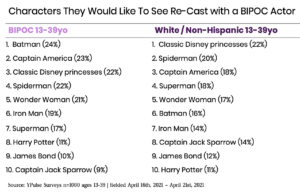 Overall, the rankings and data show that Gen Z and Millennials are interested in seeing well-known characters re-cast with BIPOC actors. But beyond just casting a BIPOC actor in a popular franchise or blockbuster, it’s important for brands to tell authentic, nuanced stories that are representative of its diverse characters (again, we’re pointing to Black Panther), and to be mindful about who is telling the story behind-the-scenes. We recently told you about how the Asian cast members of Kim’s Convenience called out the show’s writers for writing racist storylines, and our trend research found that more than half (51%) of 13-39-year-olds believe stories centered around BIPOC individuals should be written by BIPOC individuals.

North America
Young People Are Saying Goodbye to the iPod on The Viral List
TL;DR: RIP, iPod—Apple is going to discontinue making the devices after ne...
North America
One Quarter of BIPOC Young People Are Single & Looking to Date—Here Are 3 Dating Apps Made for Them
These three dating apps were made for BIPOC young singles who want to connect with ot...
North America
Hinge’s West Elm Caleb Is The Real-Life Tale of “John Tucker Must Die,” on The Viral List
Women on TikTok are sharing their stories about a serial dater they met on Hinge, you...