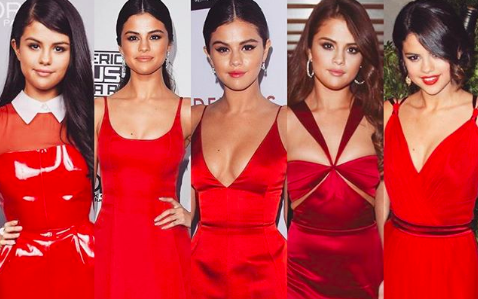 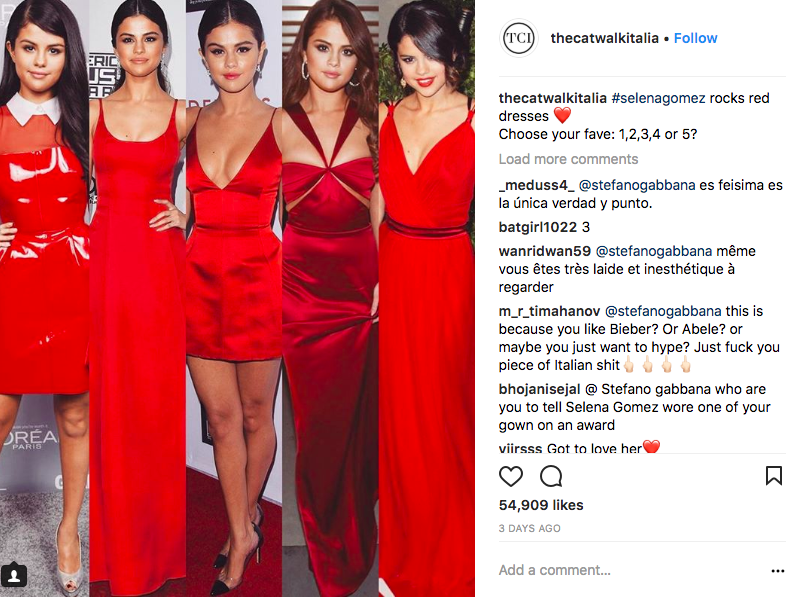 Dolce & Gabbana Under Fire for the Cyberbullying of Selena Gomez

Stefano Gabbana of Dolce & Gabbana is under fire this week for calling singer Selena Gomez “ugly” on Instagram. The comment was made on a post from @catwalkitalia which featured the singer in five dresses and asked followers to pick their favorite. Among the many responses that praised Gomez’s beauty, Gabbana commented “è proprio brutta!!!,” which in Italian means “she’s so ugly!” Gomez’s fans (which there are A LOT of) and many others quickly came to the singer’s defense, and have since made declarations to boycott the designer’s brand. Gabbana, who actually has a history of making mean-spirited comments regarding celebrities, seems amused by the uproar—but that may not last long. With the majority of 13-35-year-olds telling us that social media platforms should be doing more to police and prevent cyberbullying, it is clear they will fight for an internet where people Play Nice.

Late Wednesday night, Drake struck nostalgia gold by dropping a Degrassi-themed music video that is currently the number one trending video on YouTube. The video, for Drake’s new song “I’m Upset,” was a call back to the rapper’s former days of playing Jimmy Brooks on Canadian teen drama Degrassi: The Next Generation. It featured several original cast members celebrating their Degrassi high school reunion to the delight of the series’ fans. On top of racking up almost seven million views on YouTube, the video has ignited a war between fans and non-fans of the series, has left some questioning where the remaining cast members were, and has almost everyone on the internet agreeing that it was a successful ploy to take the spotlight off of Drake’s feud with Pusha-T.

IHOP Finally Pulls Back the Curtain on IHOb

IHOP finally pulled back the curtain on their highly-buzzed about announcement to change their name to IHOb—and the internet had a lot to say. After much internet speculation on what the “b” means, it was revealed that the chain best known for their pancakes plans to now be the International House of Burgers. While many customers were “freaking out over the rise of the burger over their beloved pancakes,” rival restaurants playfully roasted IHOP on their decision, including Wendy’s which tweeted: “Can’t wait to try a burger from the place that decided pancakes were too hard.” The chain’s president, Darren Rebelez, assured Business Insider the name change isn’t permanent. 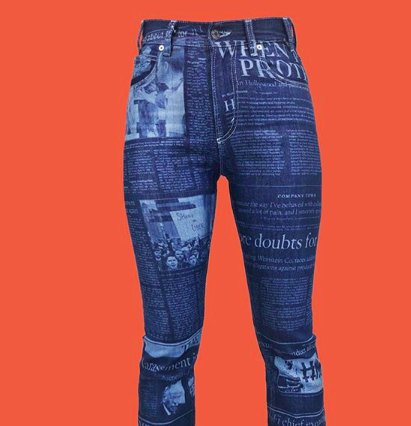 A new fashion line has released a pair of #MeToo jeans that has left many scratching their heads and wondering if the designers missed their socially-driven mark. Fashion brand Denimcratic was featured in a recent New York Times piece which featured the female founders speaking of their aim to open a dialogue on the social issues of today. But it was their We Wear the Pants line with limited sizing that garnered the most attention. A pair of jeans with news reports detailing stories about sexual harassment in the workplace garnered reactions like “I don’t want the word ‘Weinstein’ anywhere on my denim jacket…,” “asking women to pay to literally wear accused sexual abusers’ faces and names on their clothing feels like an extremely weird form of activism,” and “…how progressive can u be when you don’t sell above size 8.”

A remake of The Office intro with a dog goes viral, the recently released Dumbo trailer is giving the internet the feels, Millie Brown leaves Twitter amid a trending homophobic meme that features her, and a raccoon’s climb up a massive building had the internet on edge this week.