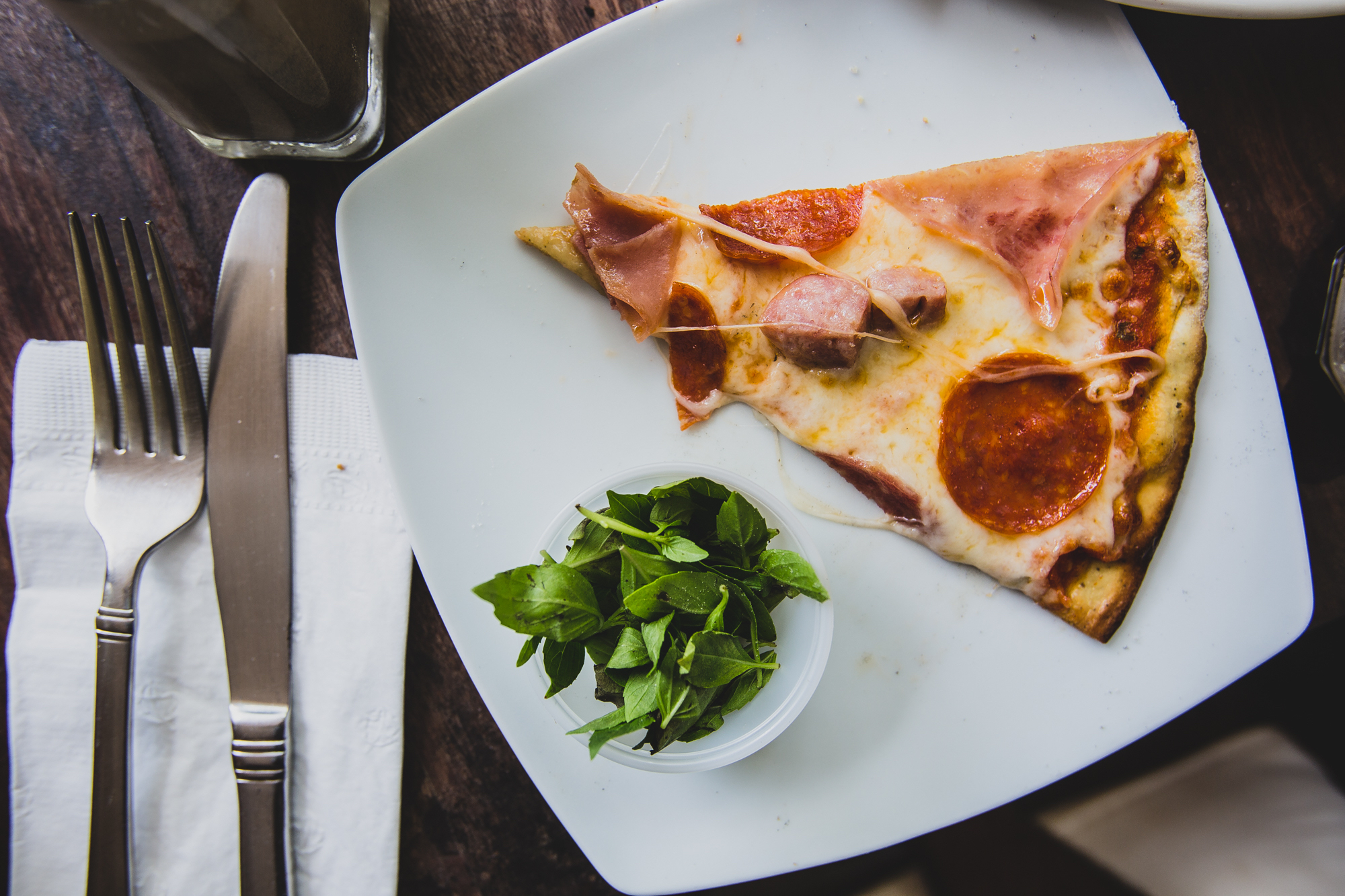 What are young consumers eating in a typical week? We looked beyond food trends to find out about their actual eating habits, from the meals they’re missing to the food they really want.

We’ve talked about the food trends Millennials are interested in, and how food is a passion for both generations, but the reality of young consumers’ day-to-day dining isn’t all food trucks and rainbow smoothie bowls. Though social media has made food a pop culture phenomenon, it’s of course also a series of daily decisions, plates grabbed on the go, meals cooked after work or leftovers eaten at desks, and at school. The majority of the food they buy and eat isn’t a glamorous Instagram shot—so beyond the trends and foodie interests, we continue to keep tabs on what Millennials and Gen Z really eat. (Including their favorite food brands, which include some college dorm staples.) Our most recent cooking and food trends survey included questions on the meals they have regularly and the foods they’re having on a typical day. Here are five stats from that research to give you some clues about how young consumers really eat today: 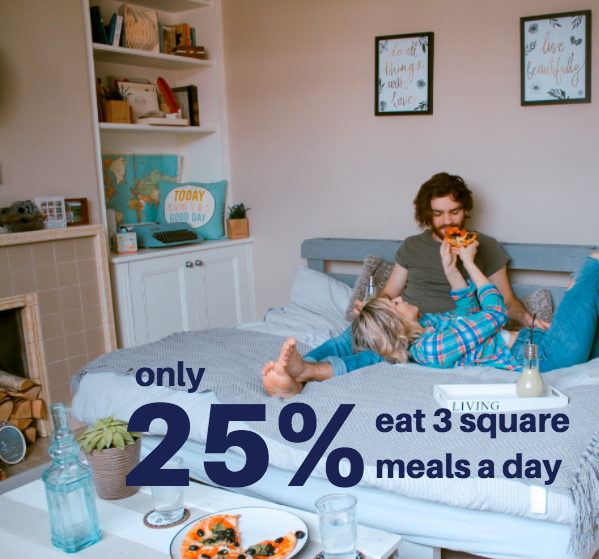 1. Only a quarter of Millennials & Gen Z eat three meals a day.

Three square meals a day is not a reality for the majority of young consumers, with our data showing that only 25% of 13-34-year-olds are eating breakfast, lunch, and dinner in a typical weekday. Males 13-34-years-old were far more likely than females to say they eat all three. The most popular meal among all groups is dinner, and breakfast is the least, with less than three quarters saying it’s a typical weekday meal for them. Interestingly, on the weekend, the number who eat lunch and breakfast actually drop while consumption of nighttime snacks, dessert, and brunch increase. 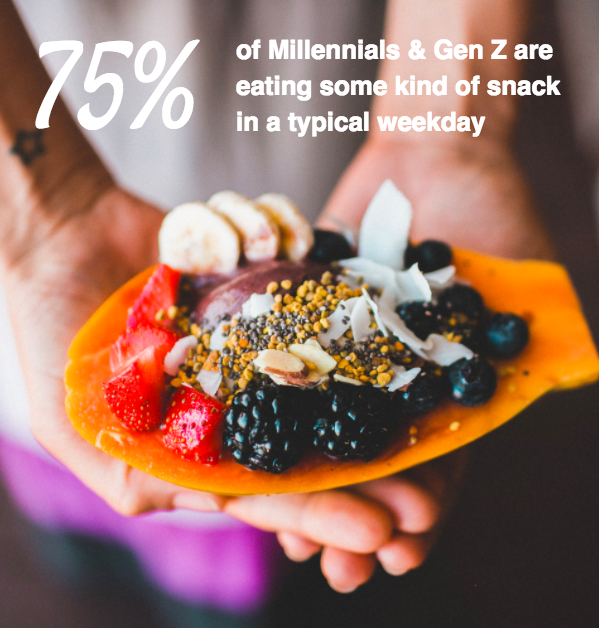 2. Three in four Millennials & Gen Z are eating some kind of snack in a typical weekday.

They might not be eating square meals, but they are certainly snacking a lot! The majority of 13-34-year-olds are having some kind of snack in a typical weekday. Over half say they have an afternoon snack, over three in ten say they have a nighttime snack, and three in ten report having morning snacks. (It’s a generation of hobbits.) The most popular snacks for young consumers are fruit and potato chips, with about half reporting that they eat these for snacks. 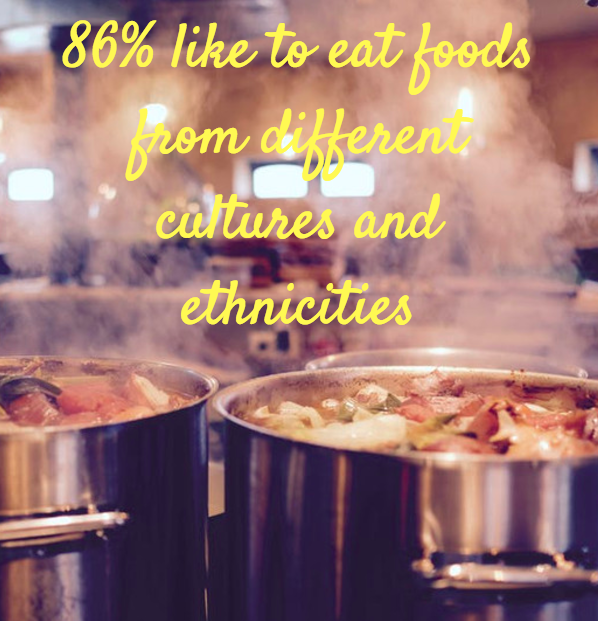 3. Almost nine in ten like to eat foods from different cultures and ethnicities.

We’ve long said that Millennials and Gen Z have broader palettes than previous generations, thanks to their early exposure to global cuisine, and the data reflects their adventurous preferences. The large majority of 13-34-year-olds say they like to eat food from different cultures and ethnicities, with desire for diverse foods increasing as young consumers age up. In a typical weekday, Mexican is the most common “non-American” cuisine they’re eating. 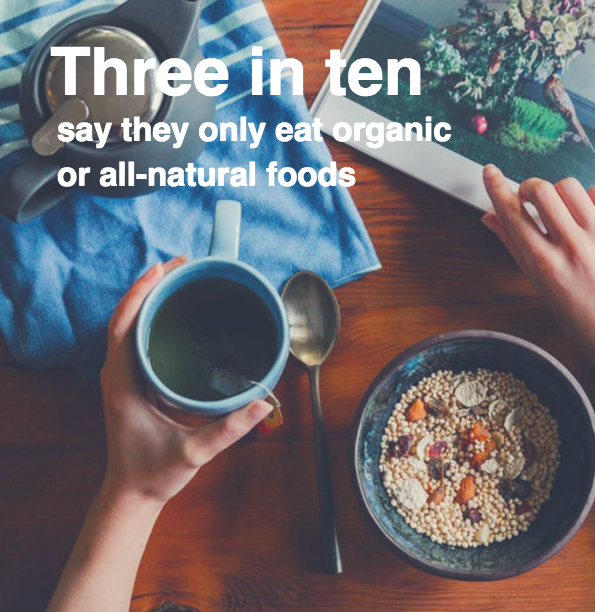 4. Three in ten say they only eat organic or all-natural foods.

While it’s not the majority, a significant number of Millennials and Gen Z tell us that they only eat organic and all-natural foods. Older Millennials (30-34-year-olds) are the most likely to agree that they only eat organic and natural. Their preference for natural labels has impacted multiple industries—even beyond the grocery aisles, as wine, beauty products, and more get the “natural obsession” boost. 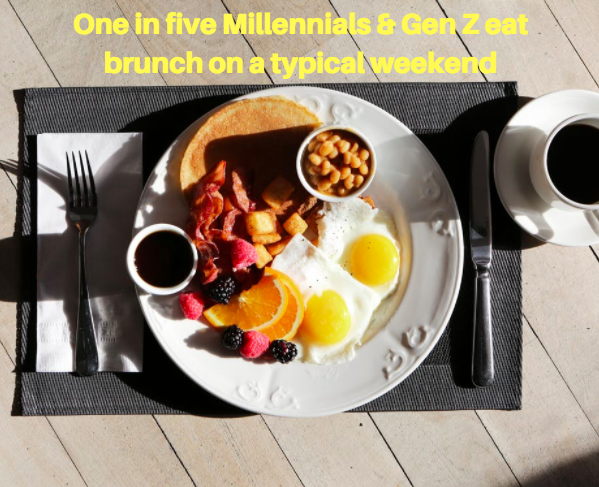 5. One in five Millennials & Gen Z eat brunch on a typical weekend.

Millennials have been accused of ruining brunch—but whether you agree or not, it’s certainly true that the generation has helped transform the meal into a cultural staple. No longer just a meal, brunch has transformed into an Instagrammable event with bottomless drinks, and a weekly ritual for many young consumers. Just consider the recent BrunchCon, a “massive brunch-pocalypse” event that celebrated the trend by featuring over 60 food vendors with food samples in tow, a Hangover Lounge, and “You had me at brunch” tee shirts. We found that 22% of 13-34-year-olds say they’re eating brunch in a typical weekend, with surprisingly little variation between age groups, or even males and females. 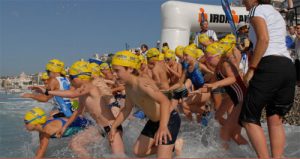