What Millennials & Teens Are Doing On Their Smartphones Every Single Day 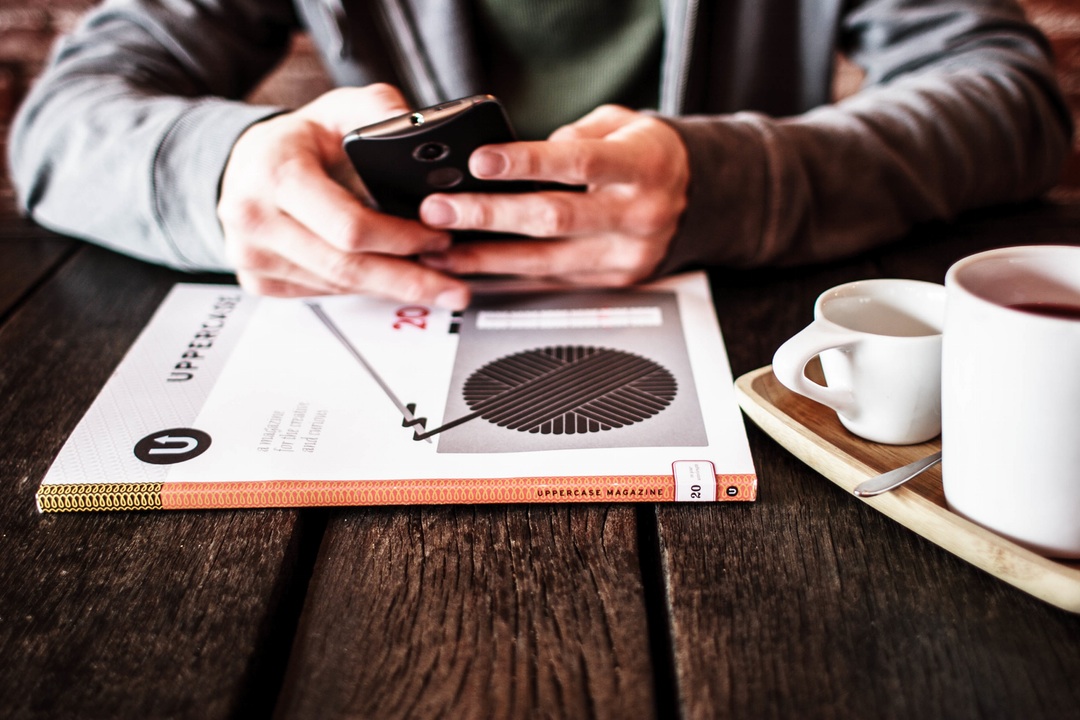 We surveyed 1000 13-33-year-olds to find out what exactly they’re doing on their phones everyday, and how use varies between males versus females, and teens versus older Millennials…

In our most recent monthly survey, one 21-year-old female told us, “I can’t live without my smartphone because I am on it several hours everyday. When my screen died yesterday, I cried.” She’s not alone. When we asked 13-33-year-olds to tell us which of the devices that you own is the ONE they can’t live without, 53% said their smartphones. Many just can’t imagine getting through the day without it.

Nielsen reports that 18-34-year-olds spend 11 hours and 26 minutes with smartphones weekly. For the first time in history we have a generation of teens who don’t remember a life without smartphones. Their reliance on mobile is impacting nearly every industry, which is why we continue to track their smartphone use. We asked the 80% of 13-33-year-olds who say they own a smartphone what they’re doing on their phones daily, to find out exactly how use varies between males versus females, and teens versus older Millennials. Here’s a breakdown of some of that activity for Millennial males versus females: 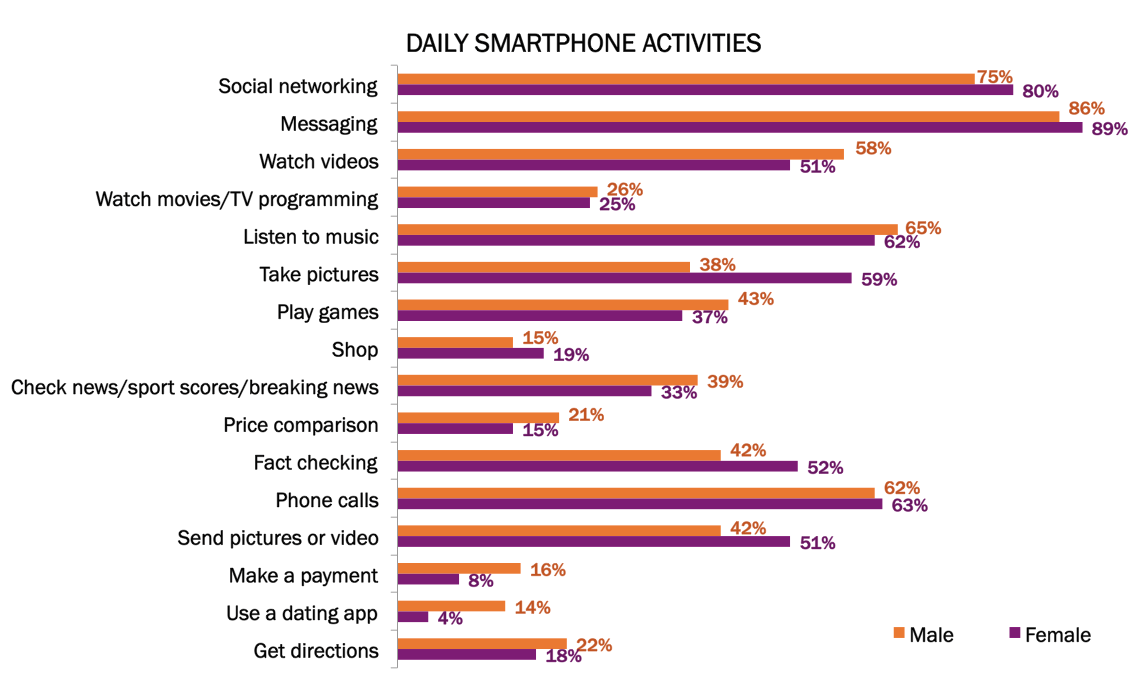 Both males and females are messaging on their phones more than any other activity, making messaging their top smartphone activity for the second year in a row. Apps like Whatsapp have clearly both spurred and benefited from the trend, and new messaging apps are appearing to compete for their attention almost daily. Social networking is the second highest smartphone activity, with females slightly more likely than males to access social media platforms on their phones once a day or more. Females 13-33-years-old are also more likely to take pictures, send pictures or videos, and check facts on their smartphones on a daily basis. Males on the other hand are more likely to watch videos, play games, check news/sports scores, compare prices, make payments, use a dating app, and (bucking long-held gender stereotypes) get directions on their phones daily. (Maybe it’s easier to ask a digital source for directions than an actual person…)

When we look at daily smartphone use broken down by age, some significant differences between the way that teens and older Millennials are using their smartphones become clear: 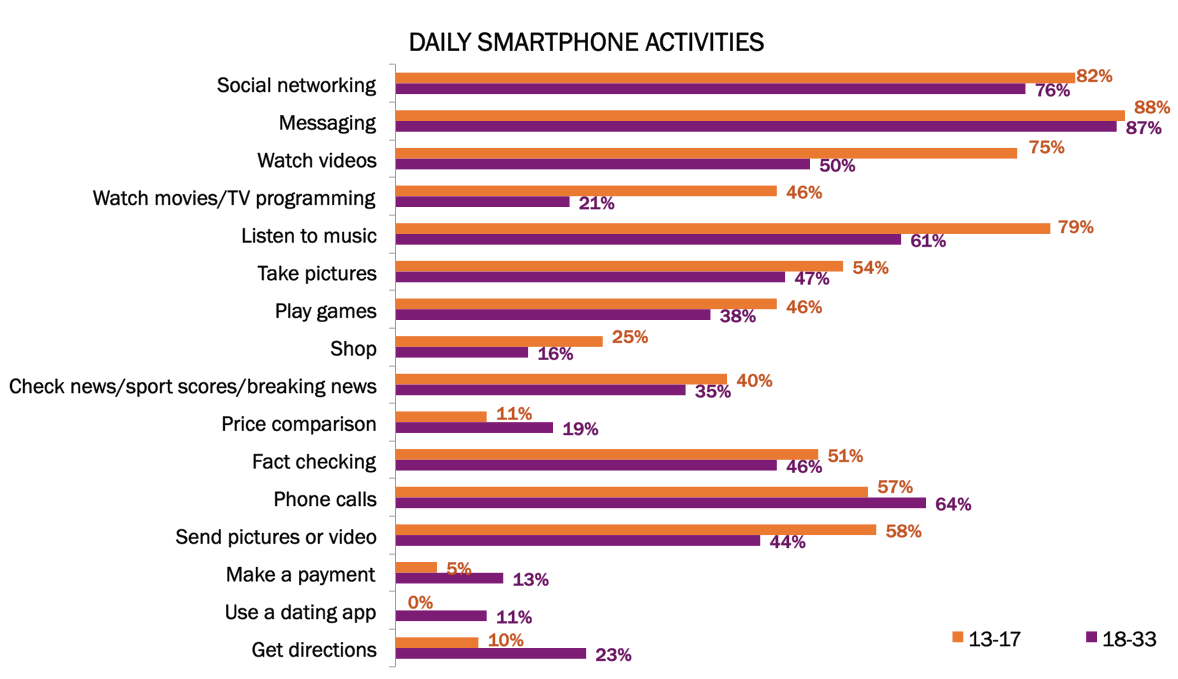 Teens and 18-33-year-olds are using their smartphones for messaging at an almost equal amount, but that’s where the similarities end. Teens are more likely than older Millennials to use their phones for social networking, to watch videos, watch movies/TV programming, listen to music, take pictures, send pictures and videos, play games, shop, check news/sports scores, and check facts. In short, they’re doing more entertainment consumptions and media distribution via mobile every day than older smartphone users. For 13-17-year-olds, the smartphone isn’t a communication device, it’s an entertainment hub, and they take advantage of all of the media sources they now have at their fingertips. While older Millennials might partake in some of this mobile entertainment behavior, their more traditional media consumption habits are more engrained, so change comes more slowly for them. But it’s possible that we’ll see these numbers increase across the board as smartphones become even more normalized, and more platforms are created to feed them snackable content in the palm of their hands.