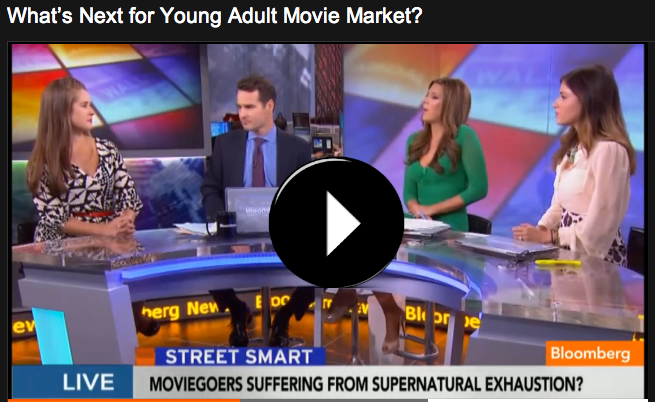 The 2013 box office struggles of YA franchises has some worrying that the trend of supernatural stories might be coming to an end. Beautiful Creatures, The Host, Percy Jackson: Sea of Monsters, and The Mortal Instruments, all young adult books and series that were converted to film in hopes of capturing the money-making magic of previous hits like Hunger Games and Twilight, have all underperformed and created a hypothesis that YA or supernatural fatigue could be at fault. Yesterday our Trends Editor MaryLeigh Bliss visited Bloomberg TV’s “Street Smart” to weigh in on the debate of whether moviegoers are suffering from supernatural exhaustion (video above), and we’re sharing our point of view with you here.


YA and supernatural stories are not over. But there are some good reasons that recent releases haven’t been meeting expectations. For one, Harry Potter, Hunger Games and Twilight developed rabid fandoms that went far beyond their targeted YA audience when they were just book series. Older Millennials (as well as Xers and Boomers) stood in line at midnight to get the latest release of Harry Potter, grown women made up a huge part of the Twihard fandom and were incredibly impassioned and organized online before the movies even had casts, and 30-something women read Hunger Games for their book clubs. This broader readership created a far larger audience for the films, which in turn likely upped the film and marketing budgets for those series in comparison to more recent YA film fare.

So what is it about these three series that captured the devotion of a broader age range? Each was unique to their markets at the time, introducing topics that hadn’t been done before, or at least not done as well. As Businessweek pointed out this week, the latest releases of YA books like Percy Jackson and Mortal Instruments tend to borrow themes and some plot points from their more famous predecessors. Without fresh stories, the excitement behind the entertainment just isn’t as high.

But a deeper reason for their comparative success might be that each reflected something that Millennials as a whole, not just teens and tweens, were feeling at the time they were published. Harry Potter was a more optimistic story about a unique and special boy who was destined for great things, a theme that resonated with Millennials in 1997 when they still believed they too were special and had great expectations for their future achievements. Twilight introduced darker fare and its heroine was less sure of herself and what the future held for her, reflecting Millennial attitudes in 2005-2008 when the series was released around the recession. (The love story in Twilight was of course also a huge part of readers’ devotion.) Finally, Hunger Games is about a struggle to survive, and its heroine Katniss needs specific learned skills, not special powers, in order to come out on top, details that more closely reflect the reality of the generation in 2008-2010 when their moods were darker and they themselves were struggling to make it in a world less friendly than they had been promised.

YA and supernatural stories can continue to find success with movie audiences, but they must be captivating stories, and to capture the generation as a whole they need to be unique. But for the big box office success stories, it could be that another won’t come along until a new book or series captures what’s on the hearts and minds of Millennials right now.

MaryLeigh’s interest in youth culture originated from her love of YA literature and pop culture anthropology, which she was able to foster while studying Communications and Journalism at NYU. As Trends Editor and Strategic Consultant, MaryLeigh manages Ypulse’s online and social media voices, acting as a culture and youth insights expert. Her role also involves identifying actionable insights and layering generational and youth knowledge over traditional research findings. In her years in trend-forecasting and market research, she has worked with a range of brands including Facebook, Bravo, and Target and has been quoted as an industry expert by such brands as Sephora and Microsoft XBox. MaryLeigh is excited to be continuing her passion for decoding and demystifying Gen Y culture and trends at Ypulse.